Something funny happened on the way to the bank: In August, commercial and industrial loans outstanding at all banks in the US fell for the first time month-to-month since October 2010, which had marked the end of the collapse of credit during the Financial Crisis.

In October 2008, the absolute peak of the prior credit bubble, there were $1.59 trillion commercial and industrial loans outstanding. As the Great Recession chewed into the economy, C&I loans plunged. Many of them were cleansed from bank balance sheets via charge-offs. But then the Fed decided what the US needed was more debt to fix the problem of too much debt, thus kicking off what would become the greatest credit bubble in US history. By July 2016, C&I loans had surged to $2.064 trillion, 30% above their prior bubble peak.

But in August, something stopped working: C&I loans actually fell 0.3% to $2.058 trillion, according to the Federal Reserve Board of Governors. That translates into an annualized decline of 3.8%, after an uninterrupted six-year spree of often double-digit annualized increases. Note that first month-to-month dip since October 2010: 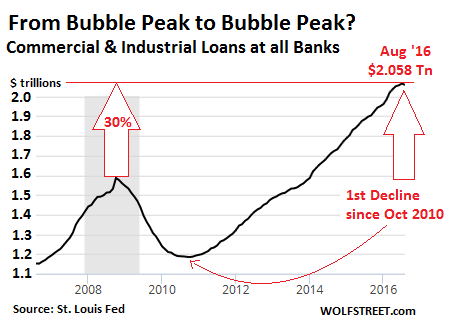 It’s still too early to tell how significant this dip is. It’s just the first one. It could have occurred because companies borrow less because they need less money as there’s less demand, and expansion is no longer on the table. Or it could have occurred because banks are beginning to tighten their lending standards, with one hand on the money spigot. And all this is occurring while banks write off more nonperforming loans (and thus remove them from the C&I balances) that have resulted from mounting defaults and bankruptcies by their customers.

The ugliest credit stories in terms of bonds, according to Standard & Poor’s Distress Ratio, are the doom-and-gloom categories of “Energy” and “Metals, Mining, and Steel.” Next down the line are two consumer-facing industries: brick-and-mortar retailers and restaurants.

But these metrics by credit ratings agencies are based on companies that are big enough to be rated by the ratings agencies and that are able to borrow in the capital markets by issuing bonds. The 18.9 million small businesses in the US and many of the 182,000 medium size businesses don’t qualify for that special treatment. They can only borrow from banks and other sources. And they’re not included in those metrics.


But when they go bankrupt, they are included in the overall commercial bankruptcy numbers, and those numbers are getting uglier by the month.

In September, US commercial bankruptcy filings soared 38% from a year ago to 3,072, the 11th month in a row of year-over-year increases, according to the American Bankruptcy Institute.

For the first nine months of 2016, commercial bankruptcy filings jumped 28% compared to the same period in 2015, to 28,789. Most of those are not the bankruptcies we hear about in the financial media. Most of them are small businesses that go that painful route – painful for their creditors too – in the shadows of the hoopla on Wall Street.

By comparison, just over 100 oil and gas companies in the US and Canada have gone bankrupt since the beginning of 2015. About a dozen retail chains have filed over the past year, along with about 12 restaurant companies, representing 14 chains. 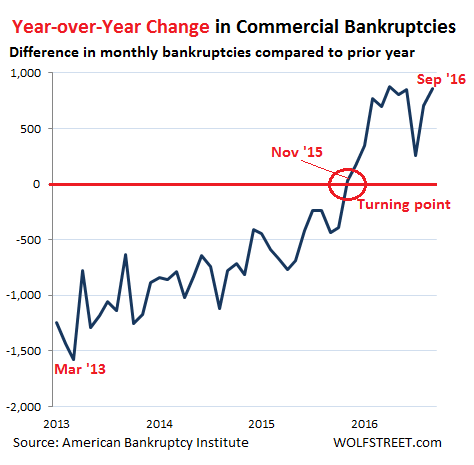 In September this year, bankruptcies exceed those from a year ago by 855 filings – the 38% jump. March and May saw similar year-over-year increases. So this looks like it’s the beginning of a new and long trend that is not going to fit into the rosy scenario.

Rising bankruptcies are an indicator that the “credit cycle” has ended. The Fed’s policy of easy credit has encouraged businesses to borrow – those that could. But by now, this six-year debt binge has created an ominous debt overhang that is suffocating these businesses as they find themselves, against all promises, mired in an economy that’s nothing like the escape-velocity hype that had emanated from Wall Street, the Fed, and the government.

Restaurants are experiencing a wage of bankruptcies that rivals that of 2009-2010, with “very challenging” sales trends. Read… Restaurant Industry, Leading Indicator of US Economy Sours, Bankruptcies Pile up