When will she buckle?

Shares of Deutsche Bank got bashed 7.6% today, to €10.49 in Frankfurt, down 67% from April 2015, to the lowest level since they started trading on the Xetra exchange in 1992. They traded below that level in the early 1980s, but decades of inflation have whittled down the purchasing power so much that comparisons are meaningless.

Its balance sheet, bloated with opaque risks, equals 58% of Germany’s GDP. It lost €6.8 billion last year. To hang on another day and to prop up Tier 1 capital, it has raised $20 billion in capital, in 2010 and 2014, by selling shares and diluted existing shareholders, and by issuing contingent convertible bonds.

These infamous “CoCos” are designed to be “bailed in” before taxpayers get to foot the bill. Thus, they’re a measure of investor fears about getting bailed in.

So when heck and high water came earlier this year, the bank responded by announcing on February 12 that it would buy back $5.4 billion of its own bonds! Everything soared! Even CoCos, though not included in the buyback, rose 24% over a few weeks. We have long ridiculed this manipulative move [here’s detailed explanation… Deutsche Bank’s CoCo Bonds Speak of Fear of the Worst].

Now shares hit new lows, and the miserable CoCos are getting clobbered, dropping 2.7% today to 73 cents on the euro, down 28% from April 2015 when they still traded at 102 cents on the euro. They’re now just a smidgen from also setting new lows. 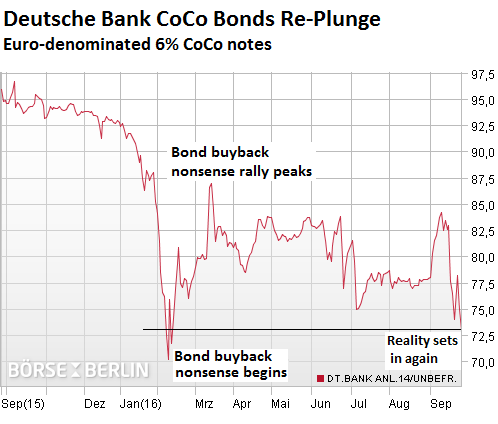 The current rout – one in a long series – was triggered because Chancellor Angela Merkel, the ultimate political animal fretting about the general elections in the fall of 2017, let voters and taxpayers know what they wanted to hear. But investors were not amused.

On Friday, Focus Magazin reported that Merkel wouldn’t meddle in the legal disputes between Deutsche Bank and the US Department of Justice over the $14 billion fine related to the scandal surrounding residential mortgage-backed securities. This is what Merkel had “signaled” to CEO John Cryan in a “confidential meeting” this summer.

Citing “government circles,” Focus reported that CEO John Cryan had “suggested” in that conversation that diplomatic mediation by the German government would be helpful for Deutsche Bank. According to these sources, Merkel also “categorically” excluded the possibility of state aid in election year 2017.

Surely, the Chancellor did not ask for this “confidential meeting.” More likely, a desperate Cryon asked for it. But there’s no official statement about it. Instead, there’s a purposeful leak piped to voters by the ultimate politician trying to get re-elected. Another bailout of bank bondholders and stockholders just isn’t very popular at the moment.

Unlike prior crises at various banks – of which there have been many in Germany – the current crisis at Deutsche Bank is being silenced to death in Berlin.

The bank has settled a laundry list of allegations, including the Libor-rigging scandal, and is still mired down in a host of other investigations, including precious metal trading, currency manipulation, and money laundering for Russian tycoons. And no one knows what might ooze to the surface next.

Given the fines, potential fines, and whatever else might crop up next, and given the bank’s precarious and opaque balance sheet, markets consider it woefully undercapitalized, and they’re expecting something to happen.

Deutsche Bank accelerated its crisis management mode. Around noon in Europe, head of communications Jörg Eigendorf came out with a statement, carefully denying fragments of the reports, and thus, in the eyes of many, confirming them:

“At no point John Cryan has asked Chancellor Merkel to intervene in the RMBS issue with the US Department of Justice.”

Concerning a bailout by the German government:

“This question is not on our agenda: Deutsche Bank is determined to meet the challenges on its own.”

So raising capital by diluting the beaten-up shareholders further and perhaps bailing in CoCo bondholders? Nope. No way. At least not “currently….” Emphasis added:

“The question for a capital increase is currently not on the agenda, we do comply with all regulatory requirements.”

Then Eigendorf reiterated on CNBC so that everyone gets it: “At no point of time, John Cryan has asked the Chancellor for support in the negotiations with the Department of Justice, and he doesn’t intend to do that. He is very strong on that position.”

But no one is buying that “comfortable” story.

Concerning the ongoing negotiations between the bank and the DOJ, he said the same thing the government has been saying all along, that the German government knows that the DOJ has reached agreements on fines with other banks in the past, and it assumes that in this situation too “a fair result will be achieved.”

And hedge funds are having a field day. By the end of last week, the largest short positions – not including the countless smaller ones – in Deutsche Bank shares had soared to €500 million, or about 3% of the float. Other estimates peg total short positions to be up to three times that, which would be close to 10% of the float!

Now folks are wondering how low shares can fall before the German government attempts to prop them up, at least with some official rhetoric. A big part of the German economy depends on Deutsche Bank remaining a well-greased money machine.

If shares drop below €9.10, the bank’s market capitalization will sink below the potential $14 billion hiccup with the DOJ. Is that the number everyone is waiting for before Merkel buckles and bails out stockholders and CoCo bondholders with a generous pile of taxpayer money? Or are its investors really on the hook without instant backing by taxpayers?

No one knows. But the odds are shifting. One thing will not happen – will not be allowed to happen, no matter what the EU rules on state aid may be: Senior bondholders and depositors will not be bailed in because the government knows that allowing a monster like Deutsche Bank to collapse into mayhem will make the Lehman moment look cute.

All this is happening even as central banks have the spigot wide open, and as the consequences of their monetary policies, including on banks, are raising fears in some unsuspecting quarters. Read…  OECD Warns Fed, BOJ, ECB of Asset Bubbles, “Risks to Financial Stability,” Pinpoints US Stocks & Real Estate