The fine that broke the bank?

Deutsche Bank investors just can’t catch a break. They keep thinking that shares have dropped so low that it’s time to grab them. Herd instinct sets in, and this buying perks up the shares. Then the bank’s sins once again come to the foreground. And what investors had grabbed was a falling knife, and fingers are now getting sliced off.

Early morning on Friday in Frankfurt – in the US, Thursday after the markets had closed, a strategic time for bad news – Deutsche Bank announced that the US Justice Department was trying to wring $14 billion out it. The fine is based on the investigation into mortgage backed securities that the bank had rolled into complex toxic products and sold to unsuspecting investors between 2005 and 2007, just before the Financial Crisis.

The Justice Department already nailed other banks for it and extracted large fines; and it’s still investigating some banks, including UBS, Credit Suisse, Royal Bank of Scotland, and Barclays – which saw their shares get pummeled today.

Deutsche Bank has already paid over $9 billion in fines and settlements since 2008. Other scandals are still simmering on the front burner, unresolved, including the money laundering scandal in Russia for which Deutsche Bank has reserved €5.5 billion this summer to cover the fines.

In its statement early Friday in Frankfurt, Deutsche Bank said it “has commenced negotiations” with the Justice Department:

The bank confirms market speculation of an opening position by the DoJ of USD 14 billion and that the DoJ has invited the bank as the next step to submit a counter proposal.

Deutsche Bank has no intent to settle these potential civil claims anywhere near the number cited. The negotiations are only just beginning. The bank expects that they will lead to an outcome similar to those of peer banks which have settled at materially lower amounts.

So let the horse trading begin. As always, a deal will be worked out. For most big banks, it would just add to the cost of doing business. These huge fines might amount to a quarter or two of reported income, nothing more. For a highly profitable, well-capitalized bank that isn’t teetering on the brink, such fines are essentially a slap on the wrist.

But these three conditions – highly profitable, well-capitalized, and not teetering on the brink – are not applicable to Deutsche Bank.

So Friday, all heck broke loose in Frankfurt. Deutsche Bank’s shares plunged 8.6% to €11.97, the biggest drop since June 27 following the Brexit vote. On July 7, they’d hit €11.38, a three-decade low, down nearly 50% from a year earlier, and lower even than during the doom-and-gloom days of the euro debt crisis and the Global Financial Crisis.


Since taking over, CEO John Cryan’s number one job has been to prop up Deutsche Bank with his rhetoric. Back in February, he explained that the bank’s position was “absolutely rock-solid, given our strong capital and risk position.” He followed up with a ruse to trample on short sellers: On February 12, the bank announced it would buy back $5.4 billion of its own bonds. Shares and bonds soared. Even the CoCo bonds, which weren’t part of the buyback plan, jumped 24% over a few weeks.

It was one of the more ludicrous efforts to prop up shares and bonds. And now shares are even lower than they’d been at the time, and the CoCo bonds have re-collapsed: 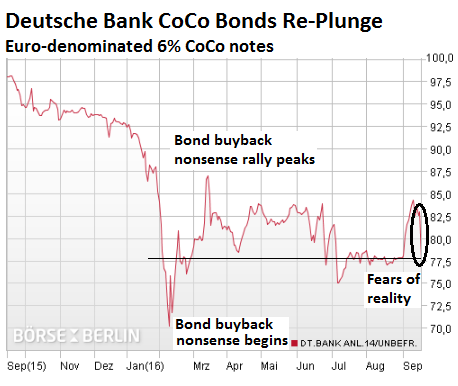 To prop up Tier 1 capital, Deutsche Bank raised nearly €20 billion in 2010 and 2014, by selling shares, which diluted existing shareholders, and by issuing CoCo bonds. CoCos are designed to be “bailed in” before taxpayers get to foot the bill. Thus, they’re a measure of how likely investors think a bail-in is.

CoCos have no maturity date, and investors may never get their money back. But the bank can redeem them, usually after five years. Annual coupon payments are contingent on the bank’s ability to keep its capital above certain thresholds. If capital falls below that threshold, the bank won’t make the coupon payment. But investors cannot call a default; they’re just sitting on bonds that have plunged in value and pay no coupon. If regulators deem that the bank is failing, CoCos get “bailed in,” either by getting converted into increasingly worthless shares or by getting canceled.

To entice investors to take these risks, CoCos offer an annual coupon of 6% or higher. Yield-desperate investors jumped on them. The 6% CoCo notes in the chart above traded as high as 104 cents on the euro in early 2014 shortly after they’d been issued, and at 102 in April 2015. Folks are ruing the day they didn’t sell!

When CoCos plunge, it’s a sign investors think those thresholds are approaching, that the bank will have to raise more capital by issuing shares and/or CoCos. But with both plunging, raising capital that way will be prohibitively expensive. So skipping CoCo coupon payments might be the next step to avoid, or delay, falling over the brink. That’s what the market is afraid of.

Clemens Fuest, president of the Ifo Institute in Munich, which produces the closely watched Ifo Business Climate Index, today explained the problem this way (translation mine):

“Deutsche Bank will not be able to pay this fine without a capital increase. The equity of currently €60 billion must not fall anymore. That would further shake the confidence in the soundness of the bank. The profits of the bank are currently so low that they are unlikely to suffice to fill the gap. This is the revenge for the failure by banking supervisors and regulators in recent years to push for a stronger increase in Deutsche Bank’s equity capital.”

If push comes to shove, Deutsche Bank will be bailed out by the German government and/or the ECB. It will not be allowed to topple and shatter the global financial system, as tangled up in it as it is. But its shares and CoCos will be “bailed in” before taxpayers get to dig into their wallets. That’s what the market sees as increasingly likely.