PBOC: “Put a brake on the excessive bubble expansion.”

For Chinese households, owning residential property serves as a mix of risk-free savings account (on the premise, valid in the US as well, that “you can’t lose money in real estate”) and highly leveraged speculative betting game. Some people own vacant apartments like Americans own stocks. A report in 2014 showed that 75% of household wealth had been sunk into real estate. Whatever the percentage is today, it’s high, to where major declines in house prices have caused uproars.

Uproars are exactly what Chinese authorities fear more than anything. But they also fear bubbles, having seen how they implode – and cause uproars.

So they tweak the housing market with various policies, ranging from local measures to central-bank monetary policies, trying to contain the bubbles. And then, when these efforts begin to implode the bubbles and people get restless, authorities step in once again to keep the market from collapsing, which has the effect of re-inflating the bubbles. Hence the yo-yo effect of government policies.

And now the People’s Bank of China is fretting again.

“Measures should be taken to put a brake on the excessive bubble expansion in the property sector, and we should curb excessive financing into the real estate sector,” warned Ma Jun, chief economist of the PBOC’s research bureau, in an interview with China Business News cited by Bloomberg.

The China Housing Index, based on newly built house prices in 70 medium and large cities, as reported by the National Bureau of Statistics, jumped 7.9% in July from a year ago – the tenth month in a row of increases. But that’s the average increase. It doesn’t reflect the pain in some second and third-tier cities, where prices have dropped, sometimes sharply. And it doesn’t reflect the horrendous bubbles in first-tier cities like Beijing and Shanghai, where prices have soared respectively 20.7% and in 27.3% year-over-year.

This chart (source: tradingeconomics.com) of the China Newly Built House Price Index shows the yo-yo effect over the past five years, in monthly year-over-year percentage change: 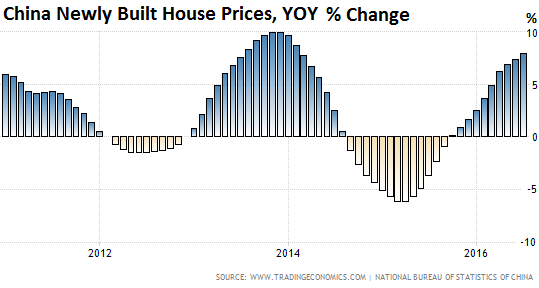 Trying to contain roaring house price bubbles in some of the biggest cities while bubbles are already deflating in other cities is a little tricky.


In June, Li Yang, committee member of the Chinese Academy of Social Sciences and chairman of the National Institution for Finance and Development, while speaking at the State Council Information Office’s “Briefing on China’s Debt Issue,” was confronted with this question:

For the past two years, multitudes of scholars and local officials have become aware of the bubbles ballooning in the housing market, and are now worried that with the risk of downward pressure on the economy, any slide in the real estate sector will possibly trigger a local debt crisis. How do you view this issue?

This is why I have reiterated that the problem cannot be solved until it has been considered in a comprehensive way. A partial attempt will not successfully solve the problem. But it will be different when we find the causes of the problem, then we can eventually find a solution.

The local governments and real estate developers are in the same boat when they sell land and houses to yield revenue and sustain employment as long as the housing prices do not fall. The logic is correct.

But the real estate bubbles, especially in the second and third-tier cities, have long been there. The decision made by the central government is to reduce the inventories of the housing market, a move understood as destocking in view of the real economy and as bursting bubbles in the financial perspective. It is an adjustment that we have to put up with.

“We need comprehensive solutions,” he added.

So now, the PBOC’s Ma Jun said in the interview on Sunday that “measures should be taken” to contain these bubbles by throttling “excessive financing” in the real estate sector. He said that a third of the leverage in the financial system added over the past ten years has come from the surge of mortgages based on the surge of housing prices.

So cities with the biggest bubbles are trying to tamp down on them with local measures, in face of a torrent of stimulus from the national government and the central bank – including slashing rates to record lows, devaluing the currency, and kicking off massive spending measures – geared toward propping up the dreadfully lackluster economy, kneecapped by slumping exports.

The PBOC is conflicted, as we would say, between the lethargic condition of the overall economy despite the torrent of stimulus, and the risks that the asset bubbles – which the stimulus policies have caused – are posing to the financial system when the associated mortgage loans implode. So the PBOC appears to have lost its appetite for additional monetary stimulus.

The subsequent price declines due to lack of government intervention would be in Li Yang’s words equivalent to “bursting bubbles”; and that would be, as he said, “an adjustment we have to put up with.”

Until the uproar re-starts. And then it’ll be time to once again yank desperately on the string of its bubble-policy yo-yo, trying to get it to wobble up one more time.

28 comments for “Another Big Central Bank Warns on Housing Bubble, Frets about Risks to Banks, Blows Whistle on Stimulus”