Not that you would have guessed from the stock market, hovering at all-time highs, or from soaring junk bonds, even the riskiest paper: CCC-and-below rated junk bonds skyrocketed since their February 12 low as their average yield plunged from 21.6% to 13.5%. Even the S&P US Distressed High Yield Corporate Bond index has soared 57% since February 12.

Those are miracles to behold.

At the slightest squiggles of the market, the Fed goes into bouts of by now embarrassing flip-flopping on rate increases that demonstrate to the world that they have absolutely nothing else in mind than keeping the stock market inflated and keeping the biggest credit bubble in US history from unceremoniously imploding.

And the ECB is out there with its scorched-earth monetary policies, with negative interest rates and bond purchases, including asset backed securities and corporate bonds, that it has been caught buying directly from issuers. It’s driving even corporate bond yields into the negative. Just now, French drugmaker Sanofi and German household products maker Henkel issued bonds with negative yields, thus getting paid by these hapless investors to borrow.

The idea for bondholders being that you have practically no income throughout and get “most” of your money back at maturity. An idea that is sending NIRP refugees into US assets, driving up their values and pushing down their yields. It all works wonderfully.

But beneath this magic is the real US economy, and there, despite this flood of money and the low interest rates and the soaring stocks, and all the shenanigans to keep the credit bubble from imploding, business bankruptcies are soaring.


In August, US commercial bankruptcy filings jumped 29% from a year ago to 3,199, the 10th month in a row of year-over-year increases, the American Bankruptcy Institute, in partnership with Epiq Systems, reported today.

There’s money to be made. While stockholders and some creditors get raked over the coals, lawyers make a killing on fees. And some folks on the inside track, hedge funds, and private equity firms can make a killing picking up assets for cents on the dollar.

Bankruptcy is one of the few booming sectors in the US at the moment. But it’s seasonal. Commercial bankruptcy filings reach their annual peak in March and April. Then in June and July, filings typically decline, and they did so this year too. And in August, filings jumped. But the moves are far beyond seasonal.

In August, the worst August since 2013, bankruptcy filings were up 44% from September last year, the low point in this multi-year cycle, and up 29% from August last year: 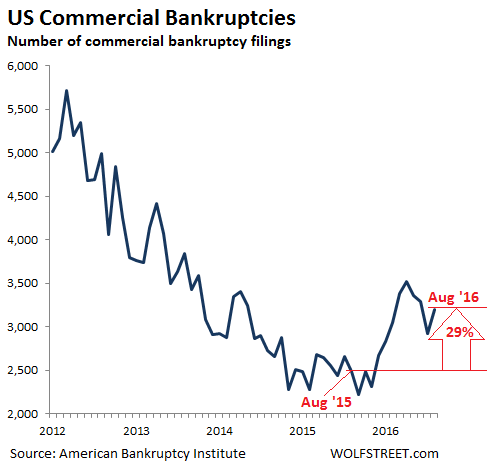 During the financial crisis, commercial bankruptcy filings soared, peaking in March 2010 at 9,004. Then they fell sharply on a year-over-year basis. In March 2013, the year-over-year decline in filings reached 1,577. Filings continued to fall, but at a shrinking pace, until November 2015, when for the first time since March 2010, they rose year-over-year. That was the turning point: 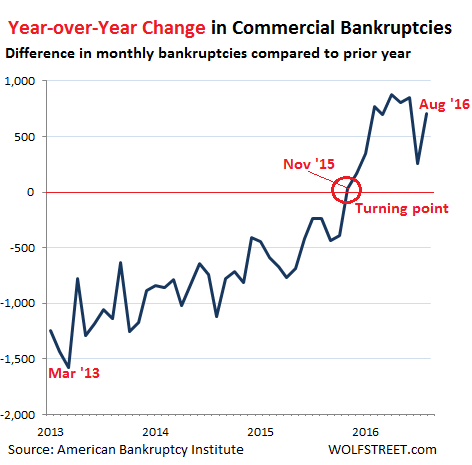 Bankruptcies – and defaults, which precede them – are indicators of the “credit cycle.” The Fed’s policy of easy credit with record low interest rates has encouraged businesses to borrow. And borrow they did. 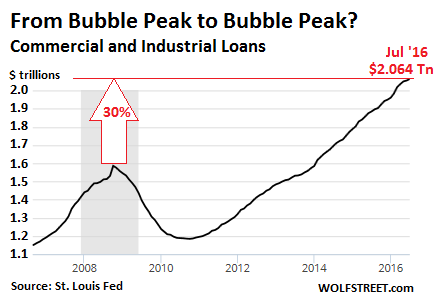 The end of the credit cycle arrives when businesses can no longer carry the debt they incurred in good times, or when they believed that good times were about to arrive. They’d believed in six years of Wall Street hogwash about “escape velocity” They’d borrowed to be ready for it, and now that debt is sinking them – hence the surge in bankruptcies.

Now the hangover is setting in from the Fed’s efforts to solve a debt problem with even more debt, to gain very little economic growth. And there is a leading indicator of big trouble already fermenting in the banks. Read…  Business Loan Delinquencies Rock Past Lehman Moment Level

52 comments for “The Great Debt Unwind Beneath the Surface: US Commercial Bankruptcies Soar”