Didn’t do what when they built the most luxurious condo tower in California?!

San Francisco’s condo market doesn’t need this sort of debacle at the moment. Condo prices are already under pressure. Sales volume has been down all year. The luxury end is in trouble. And South of Market, where this debacle is located – the epicenter of the building boom and until recently one of the hottest spots in San Francisco – is going cold. According to Paragon Real Estate, SoMa’s median condo price year-to-date fell 1.3% from the same period in 2015.

And now SoMa has the Leaning Tower of San Francisco. Someday it might make a fabulous tourist attraction, much like its famous sister in Pisa, Italy, but for now it’s just an ultra-luxury debacle called Millennium Tower, the most luxurious condo tower in San Francisco and perhaps in California.

Rated by Worth magazine as one of the top 10 residential buildings in the world, the Millennium at 301 Mission St. is home to such A-listers as Joe Montana and Hunter Pence. Until his recent death, it’s where venture capitalist Tom Perkins owned a penthouse. Condos sell for anywhere from $1.6 million to north of $10 million.

But it’s sinking. And it’s not only sinking at an alarming rate – 16 inches since its completion in 2008 – it’s also sinking unevenly and has begun to lean.

The tilt that began in 2009 has reached 2 inches to the northwest, toward the sidewalk on Mission Street, but it’s still not enough to where you can see it. We assume the tilt of the Tower of Pisa started out small too, and no one noticed at first.

But folks are worried. The Chronicle:

“That’s significant … and of concern,” said Professor Greg Deierlein, director of the John A. Blume Earthquake Engineering Center at Stanford University, who has been called in to evaluate the designs of a couple of San Francisco’s newer downtown high-rises.

Deierlein noted that the 88-story Petronas Twin Towers in Malaysia — which were the world’s tallest buildings when they opened in 1998 – have sunk less than 3 inches. Their tilt, or “differential settlement,” is less than half an inch.

It’s not a safety issue at the moment, everyone says. It’s not going to fall on top of you as you walk by. And according to P.J. Johnston, spokesman for builder Millennium Partners, who cited a structural safety review, it “has not significantly affected the seismic performance of the building.”

And the condo owners?

“I would be concerned for my investment,” Deierlein explained.

As the building shifts, sinks, and leans, walls can crack, elevators might malfunction, and so on. Cracks in the underground parking garage have been reported, and according to Johnston, “minor repairs” had to be done “to sidewalks and connections at the ground level.”

We’d think, as uninformed as we are about these things, that a 58-story ultra-luxury tower would sit on bedrock. But no.

It’s a concrete building, and therefore heavier than steel-framed buildings, and therefore more prone to sinking, and it sits on a massive concrete slab that sits on big concrete columns that go down about 80 feet through mud-fill and sand near San Francisco’s shoreline before it was filled in.

“To cut costs, Millennium did not drill piles to bedrock” at a depth of 200 feet, the Transbay Joint Powers Authority told The Chronicle in a statement. Had it done so, “the tower would not be tilting today.”

There’s no obligation to disclose to potential condo buyers that the super-luxury tower is not sitting on bedrock but sand.

Other towers in SoMa are also concrete buildings and “have their foundations at the same subterranean level,” Johnston retorted. “In any case, this was not a cost-saving decision, but the preferred design,” he said.

Not exactly comforting words for owners of condos in these other towers.

And what does the Transbay Joint Powers Authority have to do with it? Ah, this is where the Leaning Tower of San Francisco is going to turn into an epic legal battle – and potentially a taxpayer-funded bailout of the owners.

San Francisco’s new Transbay Transit Center, a rail and bus terminal with signs of the yellow-and-blue high-speed trains to Los Angeles that may never happen… 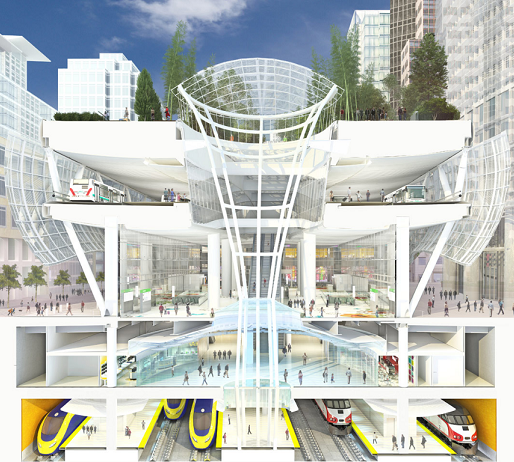 … is being built next door to the Millennium. It’s a huge construction site, snarling traffic in the entire area.

The problem first came to light in 2010 when the Transbay Joint Powers Authority, the public agency constructing the transit center, hired the consulting firm Arup to gauge how the excavation could affect the tower.

According to the consultant’s initial report, by the time excavation began – two years after the $350 million Millennium was completed – the tower had already settled 10 inches. That was 4 inches more than its builders had predicted for the life of the high-rise.

In other words, without the Transbay Transit Center construction project, no one would have even known about the problem. Condo owners would still be happy. Maybe a few would wonder about the uneven water in toilet bowls, but what the heck.

The Chronicle also reported that “the Transbay Joint Powers Authority pumped more than $58 million into an underground buttressing system to shore up the Millennium before beginning excavation in 2010” – after it had already sunk the first 10 inches and before it would sink another 6 inches.

However this will turn out, IF there are any solutions, they’re going to be expensive. And since the Transbay Joint Powers Authority – which is being blamed by the owners of the Millennium – is a public entity, taxpayers are potentially on the hook.

This debacle is hitting the condo market in SoMA and more generally in San Francisco just when the hot air is already hissing out of it. The thing is: nobody knew that the tower was sinking at this rate until they studied it due to the big dig next door. The other concrete towers built on mud-fill and sand haven’t been studied, and no one knows if they’re sinking and leaning, and now doubts are likely to begin swirling.

74 comments for “Is the “Leaning Tower of San Francisco” the Only One?”