It was the second warning in two days: auto sales – last year one of the few booming sectors in the US economy – are exiting the freeway and turning south on a road full of potholes. And that would come at the worst possible time.

The debt-fueled growth of this economy is already fizzling. On Friday, first quarter GDP growth was revised down to 0.8% on an annualized basis. “Annualized” means that if this awful pace continues, growth for the year will be 0.8%! Second quarter growth was a meager 1.2% annualized. For the first half, annualized growth amounts to 0.9%, the worst in four years.

Business investment in equipment and structures, residential investment, and government investment all declined. Trade added a smidgen. But the inventory draw-down we’ve warned about for over a year, given how business inventories have bloated to crisis levels, has arrived with a vengeance, slashing 1.2% from GDP growth.

What kept GDP growth from falling into a hole was a big bout of consumption (up 2.8%), led by debt-fueled consumer spending.

Now, the auto sector, which has propped up GDP growth for years, is slowing down. For the first six months, total car and light truck sales, at a seasonally adjusted annual rate (SAAR) of 17.5 million vehicles, are lagging behind last year by 100,000 units. Over the first half, fleet sales to rent-a-car companies and big fleet buyers were up industry wide. But retail sales fell 2%.

On Thursday, it was Ford that waved a red flag. Global sales were up 6% in the second quarter. But they’re struggling in the US, where it paid out 28% more in incentives to move the iron. So cost of sales and other expenses rose 8%, and net profit fell 9%.

It added some nuggets:

[T]he competitive environment has increased as growth has slowed and the retail industry demand has weakened. This has resulted in higher industry incentives, with a retail industry sales rate that has declined in three out of the last four months.

T]he plateauing of industry volume and the so-called car recession are having an effect on incentive levels overall that goes beyond what we had expected.

This is combined with an overall industry level in the United States that we now believe will be lower than we had planned, driven by lower retail sales. As a result, we now expect to see lower industry volume in the second half of 2016 compared with 2015.

On Friday it was AutoNation, the largest auto retailer in the US with “373 franchises and 263 stores in 16 states, representing 35 manufacturer brands,” as it said during the earnings call. Ford might get tripped up by a company-specific problem, but AutoNation is a gauge for the entire industry.


It reported that second quarter revenue inched up 4% to $5.4 billion. Quarterly net income fell 2.6% to $112 million. Because it repurchased 1 million of its own shares, earnings per share rose 0.8% to a record $1.08. So what were some of the big factors in this 4% sales increase?

New vehicle sales in the quarter, including sales from newly acquired stores, edged up a tiny 0.5% to 85,654 vehicles. The average revenue per vehicle retailed rose 3%. So much of the gain in dollar-sales of new vehicles came from getting a higher dollar figure per vehicle.

The company is trying to “manage” costs, it said during the earnings call (transcript via Seeking Alpha). It cut new-vehicle inventories to get ready for leaner times – by 6,000 vehicles in the quarter, lowering same-store new-unit supply from 76 days to 70 days. The goal is to cut this further.

And then there are the ballooning incentives to prop up sales in a slowing market. AutoNation lashed out at automakers for “irrational behavior in the marketplace,” particularly volume-based incentive programs. During the earnings call, the word “irrational” to describe manufacturers’ incentives and volume expectations was used nine times.

Despite industry retail sales being down in the second quarter, certain manufacturers – in particular, Ford, Chrysler, and Nissan – set double-digit growth targets that were unattainable. Where we felt these targets were unreasonable, we did not pursue them.

So if I look at how the first half of the year has developed, well, from a market point of view, that’s exactly where it is, with retail in the second quarter down, let’s say, 2% at retail. But it took considerably higher incentives for that to happen.

So are consumers maxed out? They’re not reacting appropriately to all these incentives. They should be buying more. But they’re buying less. Is this, as Ford had put it so eloquently, “the so-called car recession?”

Auto loans with super-low interest rates, maturities up to 84 months, and loan-to-value ratios of well over 100% have made everything possible, including higher prices and record sales. This debt-fueled buying binge caused total auto loan balances outstanding to skyrocket: 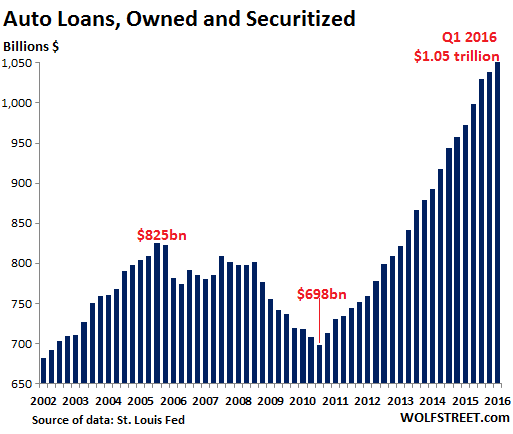 But at some point, consumers are gasping for air, banks get leery, bank regulators, such as the Office of the Comptroller of the Currency, begin to fret over these loans, and subprime auto loans are starting to cause indigestion.

The white-hot auto sector is a large component of retail sales and of manufacturing. It impacts transportation by ship, rail, and truck. It includes services and finance. The auto sector is huge and spreads across the entire economy. When it slows down, it will pull the rug out entirely from under this already languishing economy.

Numerous brick-and-mortar retail chains have already collapsed and gone bankrupt this year. Now Claire Stores is heading that way. As in so many cases, it’s owned by a private equity firm, which is now scheming to get unstuck. Read… Another Retailer Leveraged Buyout Bites the Dust