The Price-Sales ratio (among others) has blown through the roof

The California Policy Center published an interesting study – “interesting” in all kinds of ways, including its outline of the doom-and-gloom future of California’s state and local pension plans if stocks turn down sharply, preceded by its prediction that stocks will turn down sharply because valuations are totally unsustainable.

The huge, simultaneous, Fed-engineered rallies in stocks, bonds, and real estate – typically the three biggest holdings of state and local pension funds in the US – have inflated the balance sheets of these funds, thus elegantly, if only partially, papering over their fundamental problems. Most of these funds have a similar doom-and-gloom future when the asset bubbles get pulled out from under them. Plenty of pension funds don’t even need a market correction: they’re already in serious trouble despite the asset bubbles.

So what happens when these asset bubbles burst, or when, to be merciful, just one of them bursts?

Ed Ring, president of the California Policy Center and author of the evocatively titled study, “How a Major Market Correction Will Affect Pension Systems, and How to Cope,” uses a long-range cash-flow model with a number of variables to simulate different scenarios for California’s state and local pension funds. To figure out what a stock market crash might look like, he looked at three key stock market ratios for the S&P 500:

The P/E ratio of the S&P 500 companies is at 26. It spiked higher than that only three times over the last 136 years: in 1929, it peaked at 30; in March 2000, it spiked at 44; and just before the Financial Crisis, it peaked at 27. The thing to understand is that the aggregate P/E ratio didn’t plateau or level off after these three spikes. It plunged (chart via CPC): 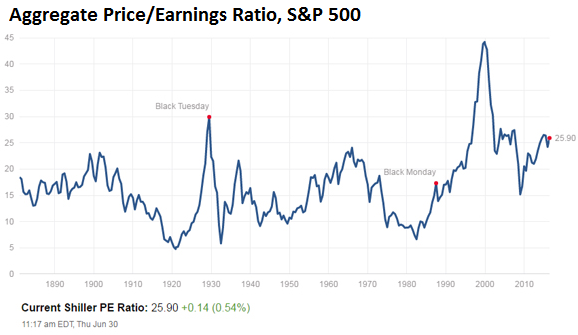 So according to Ring (emphasis added):

It measures the annual revenue of the S&P 500 companies, divided by their aggregate market value. A sour note that the report didn’t mention: these revenues have been declining year-over-year for six quarters in a row!

It measures the market capitalization of the S&P 500 as a percent of nominal GDP. It soared to 204% in 2000, and to 183 before the Financial Crisis. During the respective crashes, the ratio plunged to about 100. In 2015, it soared to 209, before the subsequent market swoon took it down to 197 by the end of the year. Since then, stock prices have risen by lot more than GDP, and the ratio – once we have Q2 GDP data – should be setting new highs (chart via CPC): 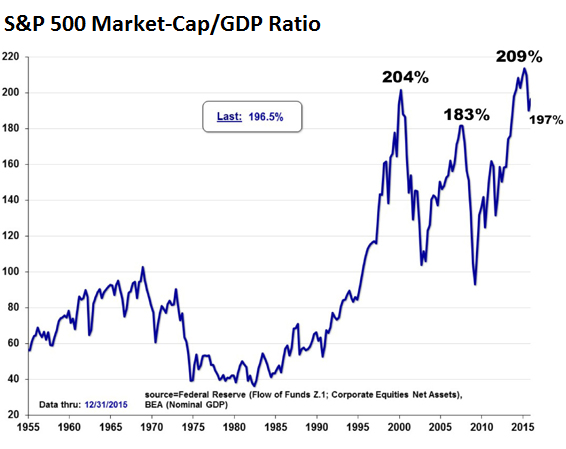 The conclusion of this section, using the average of the three ratios just considered, is that if stock prices were to return to sustainable levels, the indexes would fall by 47%. This is consistent with the findings of the previous article, which demonstrated that debt formation can no longer be used to stimulate the economy and the markets because interest rates have been stuck at or near zero for the last seven years.

CPC constructed a model (spreadsheet) where you can play with different inputs to do a what-if analysis. With the current assumptions of the pension funds, including a return on investments of 7.5% per year forevermore, the model portrays the funds in a nice light:

The results calculated by the model, based on this “business as usual” are surprisingly positive. They show the unfunded liability being consistently whittled away, such that by 2020 the consolidated systems are 72% funded, by 2025 they are 81% funded, by 2030 they are 91% funded, and by 2040 they are 118% funded.

But what if the stock market crashes 47% in 2017 and then earns 5% afterwards for years to come, with no changes to pension benefits? The consolidated average contribution would jump from 32% of payroll to 80%, which would cost Californians an additional $51 billion per year.

That’s the baseline scenario, not the worst-case scenario.

That type of crash has already happened three times during my exposure to the markets. Only this time, everything is more inflated and more messed up than before, and risks are piled higher than ever before, and none of them are priced in. So there are plenty of reasons for this scenario to play out. Yet global QE, ZIRP, and NIRP have systematically removed all reason from the investment equation. And that’s the biggest risk of all.

We just had a propitious day in our negative-yield pandemic. Read…  The “Mass Psychosis” in Bonds Takes a New Twist