Benefiting hedge funds and banks that had front-run the fund.

Abenomics is facing elections on July 10 for the less powerful Upper House.

But Abenomics hasn’t fared very well. It engaged in the biggest (relative to the economy) money-printing and bond buying extravaganza the world has ever seen. The securities the Bank of Japan has bought, now at ¥426 trillion ($4.15 trillion), amount to 85% of GDP. About $8 trillion in Japanese Government Bonds sport negative yields. Even the 30-year yield is just about zero. The JGB market, once the second largest government bond market in the world, has frozen. The BOJ’s primary dealers are in revolt. Some have already pulled out.

Savers are scared. Sales of safes to be installed at home have soared. There have been no structural reforms to speak of. Japan Inc. has benefited enormously, through various tax benefits and special stimulus packages, including foreign aid that is channeled back to Japanese companies. Government deficits are gigantic, providing additional stimulus for Japan Inc. And yet, the economy is languishing.

So Abenomics is facing its voters again. Few people on earth are as cynical about their elected officials as Japanese voters. Any remaining illusions have been wrung out of them years ago. In polls, voters have explained that they have not benefited from Abenomics. Yet, Prime Minister’s Shinzo Abe’s position remains strong, mainly because the opposition is so flimsy.

But there’s something that makes the Japanese nervous: how politicians handle their pensions. Particularly older voters. They make up a big part of the electorate. So the government decided not to rub the effects of Abenomics in their faces and rile them unnecessarily just before an election.

In April, it announced that it would delay the publication of the annual results of the $1.36 trillion Government Pension Investment Fund (GPIF), from the usual date in early July, to July 29. At the time, the election date hadn’t been set yet, but it would have to be before July 25. So July 29 was a safe bet.

The election “has absolutely nothing to do with it,” explained GPIF spokesman Shinichirou Mori at the time. His excuse was that the fund would be reviewing the results of the past 10 years and needs a little extra time to put the report together.

But like so many things of Abenomics, it too flopped: after rumors of huge losses had been swirling for months, the results were leaked.

“A person with direct knowledge of the matter,” and “speaking on condition of anonymity,” told Reuters that in fiscal 2015, which ended on March 31, the GPIF lost between ¥5 trillion and ¥5.5 trillion (between $49 billion and $53 billion).

This was the fund’s first annual loss since the Financial Crisis. All asset classes got hit, except – with hues of a bitter irony – Japanese Government Bonds (JGBs).

In 2014, after Japanese stocks had soared for two years powered by Abenomics money-printing and hedge-fund speculation, GPIF management buckled under political pressure and announced that it would shift from its conservative investment allocation focused on JGBs to one focused on stocks and other riskier assets, in line with Abenomics.

The GPIF began selling its government bonds to the BOJ and started buying stocks. It became the biggest buyer of equities in Japan, driving up prices further. Other pension funds followed the model. In June 2015, the Nikkei hit its recent peak of 20,868 (still 47% below its all-time peak in 1989). But over the past 12 months, as the GPIF curtailed its purchases since allocation goals were largely met, the Nikkei has plunged 25%!

That plunge coincided largely with the fund’s fiscal year, which ended on March 31.

The fund showed ¥33.3 trillion in cumulative investment income from fiscal 2006 – when it was converted into an independent administrative agency – through fiscal 2014. And in just one year, the fund’s new focus on stocks annihilated 16.5% of the total gains accumulated over nine years!

The source told Reuters that the preliminary results had been presented to the fund’s investment committee last Thursday, June 29. So the fund could have published the results as usual in early July. But no.

At a regular news conference, Deputy Chief Cabinet Secretary Koichi Hagiuda denied any link between the delay of the publication of these fiasco results and the Upper House election. The final results were still being compiled, he said.

The funds mega-losses were picked up by the opposition, which lambasted the government’s decision to plow the future of retirees into risky assets.

“I’ve been warning about the problem of GPIF doing risk-high investment,” Katsuya Okada, president of the Democratic Party, the second largest party, told reporters, according to Reuters. With stocks falling, “things are developing in the way I had feared.”

“We’re seeing a serious situation where pensions could be cut in the future,” he said. “I’m also worried about GPIF’s huge presence in the stock market. As a free-market economy, it’s undesirable to have a situation where the government could influence stock moves,” he said, having apparently forgotten for a moment that the BOJ is already buying stocks to “influence” them. 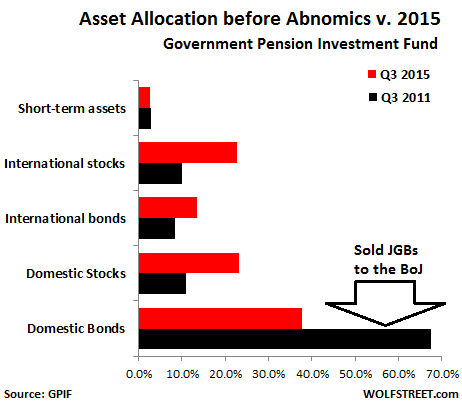 Alas, since April 2015, European and Japanese stocks have plunged, while US stocks have gone nowhere. But the reviled JGBs that the BOJ is buying with all its money-printing might rose.

The decision for switching into stocks in 2014 could not have been better if the main objective had been to squander the pensions of Japanese retirees for the benefit of hedge funds and banks that had been able to front-run GPIF’s well-announced equity buying binge, only to dump their darlings at peak prices into the lap of the eagerly buying GPIF, where they’re now festering with losses.

This is what Abenomics has done to retirees, which Shinzo Abe is now loathe to explain to them before the election. No wonder Japanese voters are the most cynical in the word.

Now, with central banks flailing about wildly, mo one knows how to back out without blowing up the whole system. Read…  NIRP Absurdity Soars after Brexit, Hits $11.7 Trillion

29 comments for “LEAKED: Japan’s Mega-Pension Fund Plows into Stocks, Eats $50Bn Loss, Tries to Hide it till after Election”