Our favorite death-of-the-dollar gurus will have to remain patient for a while longer, it appears. Not that they don’t have plenty of reasons to be confident. But right now, the much maligned dollar is hot – on every level!

With its top two competitors – the euro and the yen – now mired in negative-yield absurdity, investors are fleeing to greener pastures where yields are still higher. And the greenest pasture of them all with the most liquid government bond market is the US.

Why are investors – including central banks – so eager to buy this 10-year paper at this minuscule yield? Because it’s still the best deal in town. Of the major sovereign bonds, the 10-year German bond yield just hit an all-time low 0.023%, and the 10-year Japanese Government Bond yield just touched the record low negative -0.15%. Those yields suck. And investors seek solace elsewhere.

The 30-year Treasury auction on Thursday was also a barnburner. The bonds sold for a yield of 2.475%. A lot of things can happen in 30 years. A bout of moderate inflation might wipe out much of the purchasing power of that bond. But hey, it’s the best game in this central-bank-run town.

In its June 2016 report, “The international role of the euro,” the ECB admits what’s to blame: the “environment of low – and, in some cases, negative – euro area bond yields.”

The big spike in Q1 2015 came “in the wake of the announcement of the ECB’s asset purchase program.” After the front-running by foreign hot money was completed, the selloff in equities commenced, thus the outflows.

While foreign investors “rebalanced their portfolios away from euro area debt securities,” the ECB was buying them; an overeager bidder – and prices went up as yields dropped. Much of that foreign demand has shifted to US securities – and thus the dollar, even if it is losing some of its luster in other areas.

Central banks have diversified away from the dollar and the euro into “non-traditional reserve currencies,” such as the Australian dollar and the Canadian dollar. Between 2008 and 2015, their share ticked up by 4 percentage points to 6.8%. 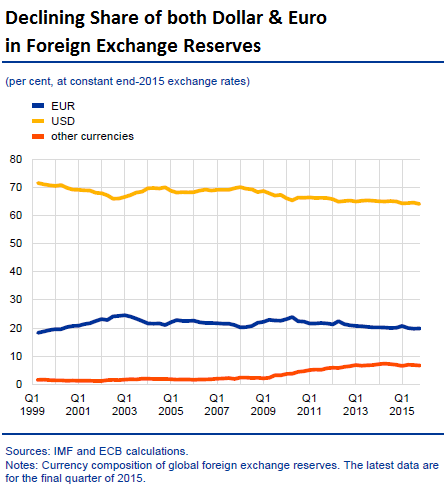 For reasons no one can seem to remember during the inevitable debt crises, countries and companies issue debt in foreign currencies. Nearly $10 trillion in dollar-denominated non-US debt is outstanding. This debt can wreak havoc when the country’s own currency, with which it has to service that debt, dives. Mexico, for example, has had plenty of experiences with this sort of debt crisis.

Still, the government of Mexico issues debt in dollars, euros, and yen. On Thursday, for instance, it completed the sale of $1.25 billion of yen-denominated Samurai bonds with maturities from three to 20 years. The 20-year bond sold at a yield of 2.4%. NIRP-tortured Japanese investors are so desperate for visible yield they’ll buy anything. And they’re all hoping that the IMF, other institutions, and taxpayers will bail out bondholders once again – as they’d done during the 1994 Tequila Crisis.

Why does Mexico do it? Because it can! Because it’s cheap! Because investors are desperate. Mexico has to pay a much higher interest to sell peso bonds where buyers fear inflation and devaluations. But most of Mexico’s foreign currency debt is in dollars. Globally, 60.3% of foreign currency bonds are denominated in dollars, but only 22.75% in euros, and 2.7% in yen.

The dollar also dominates in international loans with a share of 57.7% compared to 21.9% for the euro, and 3.9% for the yen. This chart by the ECB shows just how relentlessly dominant the dollar still is in four of the five categories; 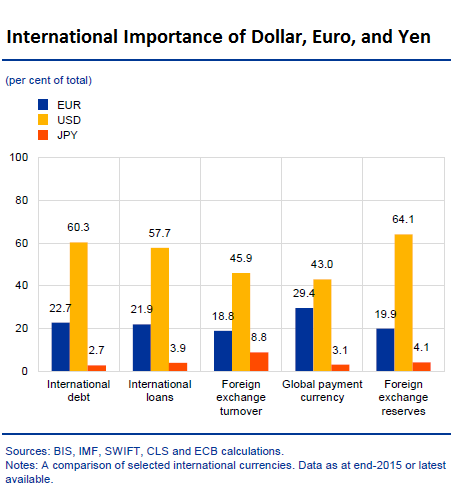 In the ECB’s chart below, note the appearance of the color baby-blue. That’s the Chinese Yuan (CNY) which is picking up heft from next to nothing in 2012 to a still nearly imperceptible 2% in 2016. It’s moving slowly, but it’s moving inexorably. It’s already close to parity with the yen (light green): 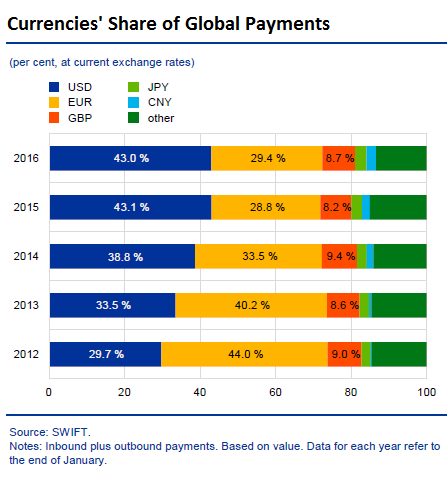 An apparently government-backed Revolt against NIRP-Obsessed Draghi is just now playing out in Germany. Read… ECB Gets Clocked by the Two Biggest German Banks

84 comments for ““Death of the Dollar” Not Yet”