Over the next 2 decades, there will be an average of 7.5 million fewer 0-55yr/old Chinese every year vs. an average annual increase of 9.5 million 55+yr/olds. And the wealthy minority of the elderly have stashed their reserves in a whole lot of expensive, vacant real estate that they intend to pass along (rent or sell) to the declining young population. What could go wrong since housing prices only go up…right!?!

But as the Chinese gained wealth, (particularly among the wealthy of the tier 1 & tier 2 cities), the wealthy soon to be elderly didn’t trust banks or the stock market. Instead they piled their savings primarily into real estate. The top quintile of Chinese purchased the bulk of the new speculative inventory of high-end housing, typically buying multiple apartments and condos.

The vacancy rate among the housing segment in these cities is supposedly in excess of 20% (compared to a peak of 3% during the US subprime crisis). There are roughly 500 million households in China and best guestimates suggest that there are 50 million or so vacant housing units…or 10% of the national housing stock.

To put this in perspective, I’ll compare it to the US subprime crisis…a crisis that was likewise triggered by the demographic deceleration of population growth. But still, despite decelerating in the US, there was (and still is some growth…see below). The Fed was determined to use (ok, abuse) interest rate cuts as a substitute for decelerating population growth among adults. The chart below outlines the decelerating 20-64yr/old annual population growth through 2025 (this includes all permanent residents…legal or otherwise). 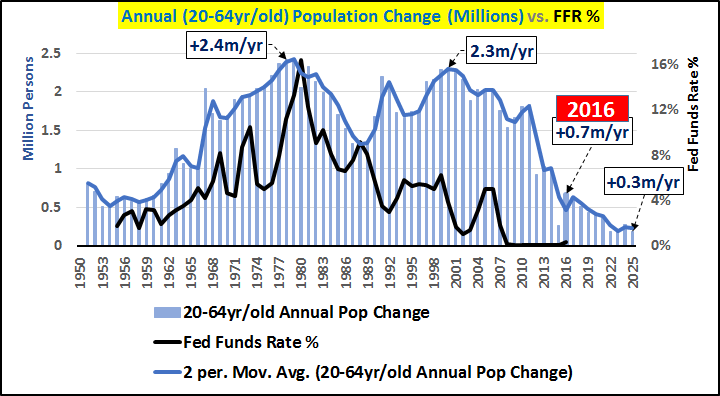 And on a percentage basis (below), the declining growth among the adult population correlated to the Federal Funds rate and federal debt. The introduction of nothing down, NINJA and liar loans was simply because there was a collapsing number of potential buyers to support a speculative bubble, particularly in the “tier 1” US cities and locations. 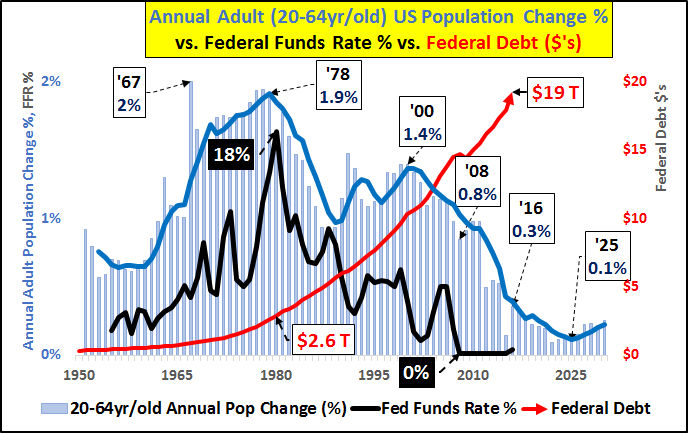 And the changing nature of US net new job creation vs. US new home creation (below). A 2.5 to 1 ratio has inverted since ’00 with more houses being created than full time jobs to support them. Further evidence that US subprime crisis was triggered by a demographic collapse (here). 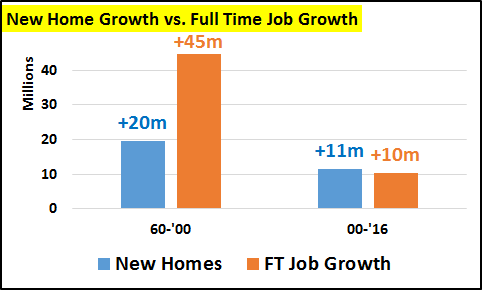 So, back to the biggest bubble leading to the biggest short (ever?). The chart below highlights China’s annual adult population change, the Bank of China discount lending rate, and China’s moonshot of total debt. The decelerating population growth offset by declining lending rates leading to excessive debt and asset bubbles. Pretty standard central bank stuff. 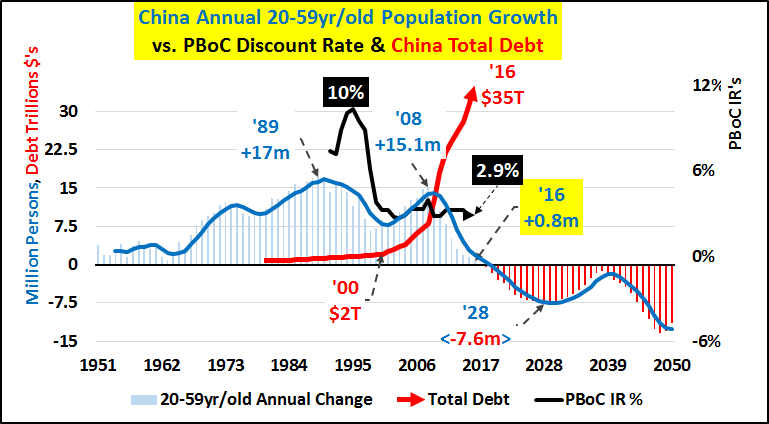 And just in case you didn’t quite catch why China is the biggest bubble and China’s housing market is the biggest excessive vacant inventory the earth has ever seen…a population boom followed by bust…and the bust concurrent with interest rate cuts to substitute debt for decelerating organic growth.


Below, China population and debt change from 1980 to 2008. And $5 trillion of the $7 trillion increase in debt has been incurred since 2000…just as the population deceleration became very noticeable.

And below, the substitution of debt for the absence of any population growth among the 0-55yr/old Chinese population since ’08.

So, to summarize, China’s retirement age is 60 (50 to 55 for women)…and the wealthy 55+yr/olds (especially the 65+yr/olds) hold huge numbers of speculative, vacant apartments across China’s cities. These apartments / condos are intended to supply the wealthy elderly Chinese with rental income and/or be sold to fund their later years. But the fly in the ointment is the whole collapsing population of buyers vs. a swelling quantity of elderly sellers.

And funny thing, according to the World Bank, the declining Chinese employment ratio divided by the 15+yr/old Chinese population yields the below annual job growth in China. A 70% deceleration in annual job creation since 1990. This probably matters. 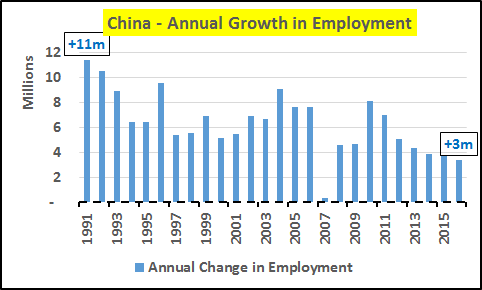 And finally below, the mismatch of 0-55yr/olds vs. 55+yr/olds from 1990 through 2050; and for jiggles, I include the Chinese M2 monetary supply. From ’99 through ’15, the Chinese M2 has increased 1400% compared with a 260% increase for the dollar…and that was while the 0-55yr/old Chinese population was only decelerating. Now that the 0-55yr/old population begins its rapid decline, my estimates for China’s M2 and China’s debt are likely to be hit decades early. 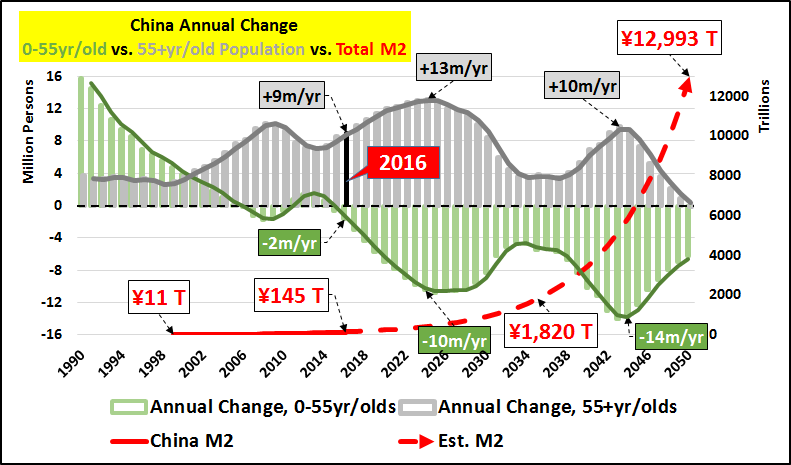 So, ok, where’s the short? Well, it probably isn’t housing or construction or even commodity suppliers. If China follows the same path as every other quasi-capitalist (er-communist?) state, we can expect a flood of money like the world has never seen. Bailouts across industry and state buyouts of investors. And the Yuan, swallowing all this debt and spewing all this bailout cash, is probably the short of a lifetime. And how does this fit into the global macro picture? Here.

And there may be a few implications for the US since the Chinese have been net Treasury sellers since July of ’11. Here. By Chris Hamilton, Hambone’s Stuff

22 comments for “China Is the Biggest Short…Ever”