The Technology S-Curve caught up with it.

There’s always a lot of noise you have to deal with when analyzing a company. The trick is to cut through it and isolate the key drivers of the stock price.

Take Apple for example. Its stock price primarily depends on iPhone growth. Out of the $50.6 billion in revenue Apple made in Q2, $32.9 billion came straight from the iPhone. That’s over 65%… the business clearly depends on this one product.

But if you look at year-over-year sales, they’re decreasing. There was an 18% drop in iPhone revenue from 2Q 2015 to now. This was far worse than analyst estimates and is a large cause for concern given that the iPhone drives the company’s share price.

The problem is that the smartphone market is maturing. Most people who want a smartphone already have a smartphone. Revenue in Q2 of 2015 for the Americas, Europe, and Japan is less than it was in Q2 of 2014. This is a blatant sign that these markets’ demand has matured.

And with no new demand, Apple is left to compete against itself for upgrades. But according to CEO Tim Cook, the underwhelming Q2 report was due to a significantly slower iPhone upgrade rate.

Why are upgrades slowing? It’s because not only is the smartphone market maturing, but smartphone technology itself is maturing. It comes down to the technological S-curve. As Benedict Evans explained:

A technology often produces its best results just when it’s ready to be replaced — it’s the best it’s ever been, but it’s also the best it could ever be. There’s no room for more optimisation — the technology has run its course and it’s time for something new, and any further attempts at optimisation produce something that doesn’t make much sense.

The development of technologies tends to follow an S-Curve: they improve slowly, then quickly, and then slowly again. And at that last stage, they’re really, really good. Everything has been optimised and worked out and understood, and they’re fast, cheap and reliable. That’s also often the point that a new architecture comes to replace them.

You can see this very clearly today in devices such as Apple’s new Macbook or Windows ‘ultrabooks’ — they’ve taken Intel’s x86 and the mouse and window-based GUI model as far as they can go, and reached the point that everything possible has been optimised. Smartphones are probably at the point that the curve is starting to flatten… 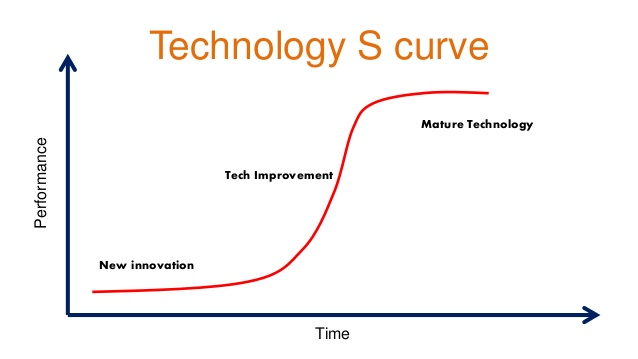 Smartphones have gotten as good as they’re going to get. This is why users aren’t rushing to upgrade like they used to. As hardware matures, it causes the upgrade cycle to lengthen and chokes off growth. We saw it happen with both PCs and tablets. Smartphones are no exception.

So how is Apple management trying to solve this maturity problem? They’re going all-in on China.

China is the last hope for the tech giant’s iPhone growth. Its economy is big enough to move Apple’s bottom line. But if you’ve been following the macro situation in China even a little bit, you know the picture is “lukewarm” at best. And “mad max” at worst.

China has been spastically hitting the credit needle in a desperate attempt to juice stagnating growth. Pledged loans continue to rise with no end in sight. But it’s just not helping anymore. The property market has cooled off despite the liquidity injections. And the stock market is in the gutter. While economic growth has been declining.

This deteriorating macro picture is already showing up in Apple’s earnings.

In the recent Q2 report, revenue from China actually dropped 26% year over year. The China growth strategy is clearly not going as planned.

Carl Icahn recently closed a large position in Apple for this very reason. Not only was he concerned about China’s growth, but also their excessive regulation. As Icahn explained:

“You worry a little bit — and maybe more than a little — about China’s attitude. [The government can] come in and make it very difficult for Apple to sell there … you can do pretty much what you want there.”

China recently shut down both Apple’s iBooks store and iTunes Movies. Their relationship with the company is quickly souring, making sales even tougher.

And we can’t forget about USD strength either. That trend has not gone away by any means. The Chinese devaluation of the Renminbi is also still very much on the table. One thing’s for sure. A weakening yuan will not bode well for Chinese iPhone sales. Apple is incredibly exposed to foreign exchange risk in China.

At this point, Apple looks like a stock our team at Macro Ops wouldn’t touch with a 10-foot pole. Its brutal transition from growth stock juggernaut to blue chip value has been a tough one.

Now we don’t recommend shorting stocks like Apple because there is cash flow and the valuation is fair. But we absolutely don’t want to be long either. Apple is what we call a “dead money” stock. It’s a lumbering sleepy giant that churns and grinds sideways for years and years. Think of Microsoft after the ‘99 bubble deflation.

Your money is better put to work elsewhere. Something that has the potential to move a lot and actually pay you a respectable dividend yield.

To top it off from a technical perspective, Apple has broken down from an 18-month topping pattern and is about to challenge its long term trend line. 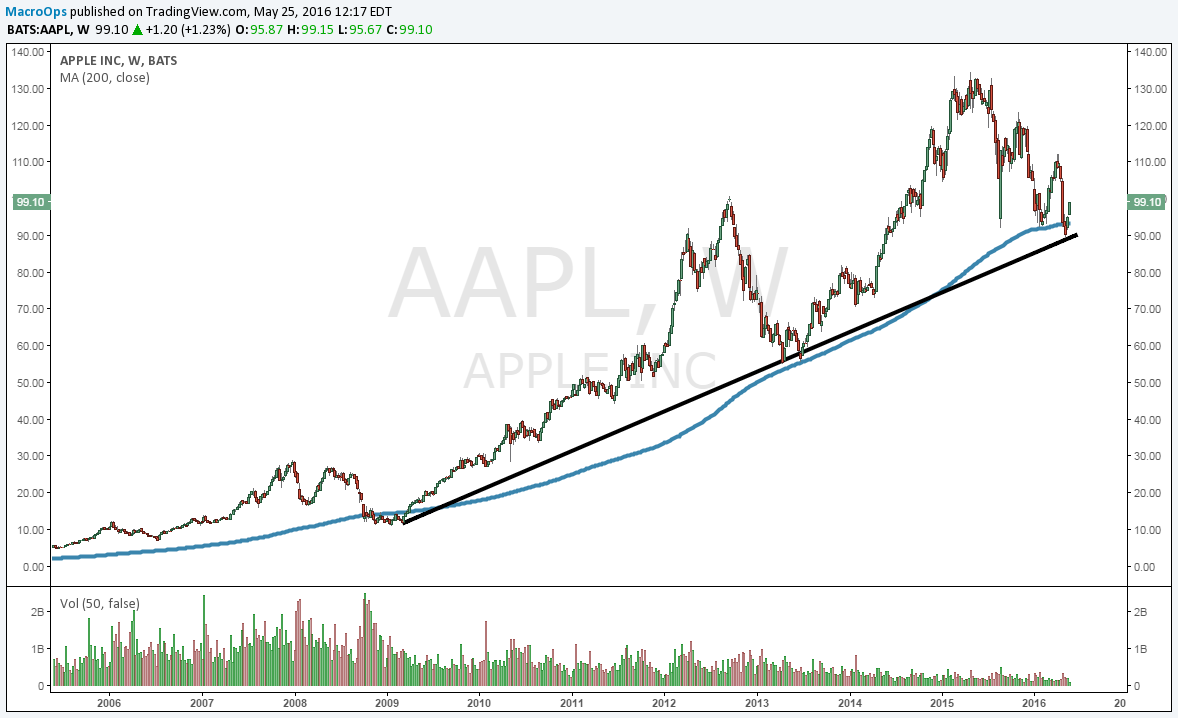 With a maturing smartphone market and their only potential source of growth (China) nearing economic Armageddon, Apple’s stock price is due for a long grind sideways frustrating both bulls and bears. By Alex M., Macro Ops.

All 30 companies in the Dow have now reported first quarter earnings. Of them, 19 also reported “adjusted” earnings that they skillfully draped over their GAAP earnings, and now it all looks just so much prettier. Even the SEC woke up. But what will the media do? Read…  OK I Get it, Corporate Earnings are a Fairy Tale and Reality is Crummy, But Do They Have to Push it This Far?

23 comments for “Apple Is a Dead Money Stock”