“Marginalized” and “excluded” “due to the Crisis”: EU poll

The human aspects of the European crisis, such as the effects of horrific youth unemployment in some countries, have largely receded from the headlines that ECB potentate Mario Draghi rules with his beautifully concocted negative-interest-rate absurdity and his efforts to manipulate the financial markets. Lesser ECB figures also try to get into the headlines edgewise, including German Bundesbank president Jens Weidmann, but no one listens to him anymore.

Yet, and despite Draghi’s bluster, the real problems in the EU, particularly in Greece, Portugal, Cyprus, and Spain, have not been solved – and I mean, not at all – as shown by the results of the big poll about young people in the EU. The survey, commissioned by the European Parliament and conducted by TNS opinion, led to an evocatively-titled report, “Most young Europeans feel marginalized by the crisis, says Eurobarometer poll.”

For some countries, the results are outright horrifying. Young people are the future. They’re expected to make these countries function down the road.

In total, 10,294 young people aged 16-30 in the 28 EU Member States were polled on a variety of questions, ranging from participation in European parliamentary elections to environmental behaviors, like “systematically sorting your waste.”

But at the core were several questions whose results caused the authors to title that section, “An Impression of Exclusion, due to the Crisis,” with echoes of 2012. So the poll asked:

Do you have the feeling that in (our country), young people have been marginalized by the economic crisis that is to say excluded from economic and social life?

These EU averages are weighted by size of the population in each Member State. The six most populous – Germany, Italy, the UK, France, Spain, and Poland – account for about 70% of the average. But beyond the already worrisome average are scores for individual countries that are a terribly sad depiction of what is happening in those countries.

At the far right of the chart below, the heroes (“yes” marginalized = red columns): Denmark (DK) where 31% of the young people feel marginalized “from economic and social life,” Malta (MT) where 28% feel that way, and Germany (DE) with 27%.

At the left of the chart: Greece (EL), where 93% of the young people feel marginalized “from economic and social life”; Portugal (PT) with 86%; Cyprus (CY) with 81%, and Spain (ES) with 79%. These are the countries whose bondholders have mostly been bailed out by the Troika and by Draghi’s promise to do “whatever it takes” to continue to bail them out: 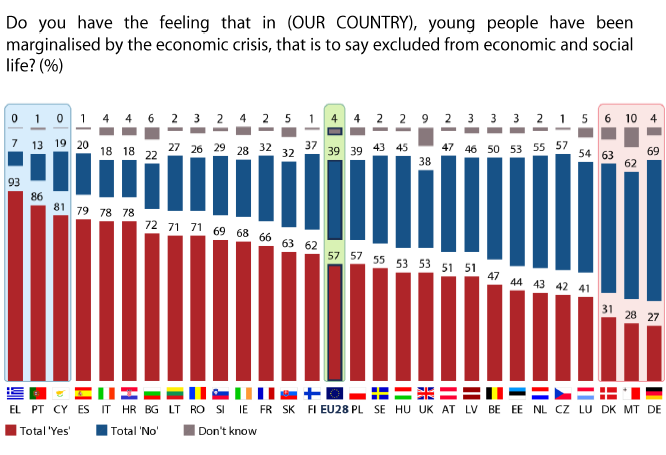 Those who feel the most marginalized also feel the most frustrated with their educational and training system. While 59% of young people in the EU overall rate their national systems of training, school, and university education “well adapted to the current world of work,” there are two large divergences.

And two, vast differences between countries. Countries where the fewest people felt marginalized had the highest ratings on their school, training, and university systems — left side in the chart (“well adapted” = blue columns). But then it deteriorates.

In France, where the official unemployment rate has been over 10% for the last three-and-a-half years, only 42% of the young people felt their system was well adapted, followed by Romania, Slovenia, Spain, Cyprus, Bulgaria, and Greece with a dismal 25%. In these countries, young people feel that their system is failing them! 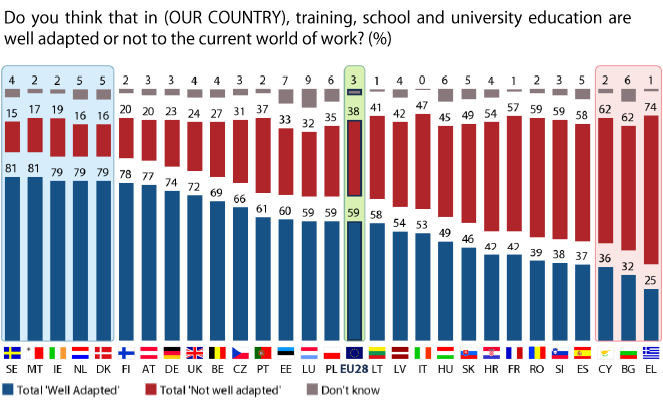 Then the poll asked about mobility: 32% of the young people said they want to study, undergo training, or work in another Member State, but only 12% ever actually did or are doing any of these, ranging from 48% for young people in Luxembourg to 5% for those in Italy.

Because of the crisis, you feel compelled to study, undergo training, or work in another EU country than (our country):

For the EU on average, 15% of the young people “feel compelled” to seek their fortunes in another EU country. But the average just covers up reality: In Germany (DE), only 1% “feel compelled” to do so, and in Sweden (SE) only 2%, versus those in countries whose bondholders have been bailed out: Portugal (41%), Greece (43%), and Cyprus (51%), where hope for young people seems to have evaporated: 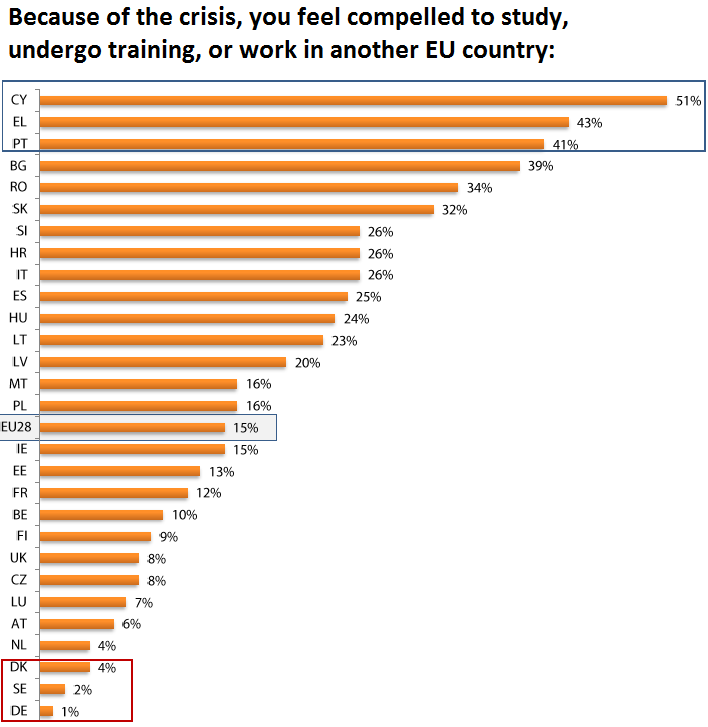 Despite Draghi’s bluster about saving the Eurozone economy, or whatever, with his absurd policies, the reality for some Member States’ young people – the economy’s future – has become dismal.

But even central bankers seem to have trouble taking themselves seriously. Read…  ECB Admits: “We’re the Magic People” in a Clown Show