There is a misconception about the uncanny ability of very profitable US companies, like Microsoft and Apple, to park their profits overseas in order to dodge US taxes: the money from these profits that are parked “overseas” isn’t actually overseas.

It is registered in accounts overseas, for example in Ireland, but is then invested in whatever assets the company chooses to invest it in, including in US Treasuries, US corporate bonds, US stocks, and other US-based investments. This was revealed to the public during the Senate subcommittee investigation and hearings in March 2013 that exposed where Apple’s profits that were officially parked “overseas” actually end up.

“Tim Cook emerged smelling like a rose, the triumphant CEO of America’s most iconic welfare queen,” I wrote at the time. And so the practice continues in all its glory.

These funds cannot even be “repatriated” because they’re already here — or wherever the company wanted to invest them.

According to a recent report by the Government Accountability Office (GOA), this and other practices give large corporations a big advantage over small businesses and individuals. Some key findings:

In each year from 2006 to 2012, at least two-thirds of all active corporations had no federal income tax liability.

Among large corporations (generally those with at least $10 million in assets), 42.3% paid no federal income tax in 2012.

Of those large corporations whose financial statements reported a profit, 19.5% paid no federal income tax that year.

For tax years 2008 to 2012, profitable large U.S. corporations paid, on average, U.S. federal income taxes amounting to about 14% of the pretax net income that they reported in their financial statements (for those entities included in their tax returns).

Federal Tax collections from corporate income taxes are now around 2% of GDP while those from individual income taxes are over 8% of GDP and rising. I added the red arrow and label to indicate where we stand: 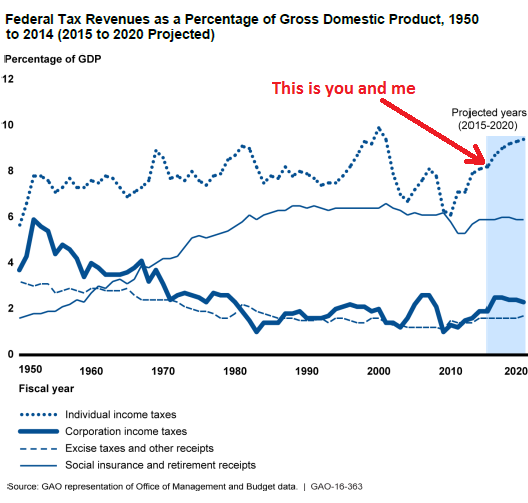 The report points out the vast difference between the much bemoaned statutory corporate income tax rate of 35%, one of the highest in the world, and the Effective Tax Rate, which is zero for some of the most profitable companies.

OK, disclosure, I’m envious. I wish I could legally do that. As American, my worldwide income is taxed in the US (plus in other jurisdictions) even during the times I lived overseas — which makes American expats the laughing stock of much of the rest of the world. And we have no one else to blame but us; we voted these geniuses in Congress into office.

Apple shares have plunged 32% from June last year, and $282 billion in shareholder wealth has evaporated, on swooning sales and crummy data from suppliers. But still, Apple’s market capitalization is over $500 billion. And Alphabet’s is nearly $500 billion. Along with Facebook, Amazon, and LinkedIn, they constitute the Big Five in Silicon Valley, with a giant footprint on commercial real estate. And this could get very ugly! Read…  Silicon Valley Commercial Property Boom Ends, Totally Exposed to Big-5: Apple, Google, Facebook, Amazon, LinkedIn

77 comments for “US Companies Stockpile the Profit “Overseas.” But where the Heck is the Money?”