There is no escape.

The Census Bureau announced today that total business sales in January did what they’d been doing relentlessly for the past one-and-a-half years: they fell! This time by 1.1% from a year ago, to  $1.296 trillion, and by 5% from their peak in July 2014.

They’re now back where they’d been in January 2013. Sales are adjusted for seasonal and trading-day differences, but not for price changes. And since January 2013, the consumer price index rose 2.8%! This is why the US economy has looked so crummy.

That’s bad enough. But it gets much worse.

Total business sales are composed of three categories: sales by merchant wholesalers (33% of total), by manufacturers (36% of total), and by retailers (30% of total).

Sales by merchant wholesalers took the biggest hit: they plunged 6.4% from January a year ago, to $433.1 billion.

The economy’s kick-butt, take-no-prisoners winner? Sales of drugs soared 11.0% to $53.6 billion. As we found out today via Express Scripts Drug Trend Report, those sales increases weren’t caused by people suddenly taking more drugs; they were caused largely by price gouging.

Turns out, prices of brand-name prescription drugs soared 16.2% in 2015! One third of these drugs had price increases of over 20%! On average, they’re up nearly 100% since 2011. This is a patent-protected, monopolistic industry that has managed to rip off every consumer and government in the US. And there’s more. Express Scripts:

That’s a nod toward, among others, Valeant whose shares plunged 51% today. They’re now down 87% since July last year when a short seller with a big megaphone exposed the company’s nefarious practices.


Wholesales of drugs, at $53.6 billion in January, are the largest category, durable or non-durable, and make up 12.4% of total wholesales. That’s how out of whack the industry has become, after decades of price gouging.

Sales by manufactures, the second component of total business sales, dropped 2.3% year-over-year, while sales by retailers rose 2.7%. These percentage changes are not adjusted for inflation. With overall CPI up 1.4% for the 12-month period, real retail sales growth looks even worse.

This chart shows total business sales – and the elegant 5% swoon since July 2014. Sales don’t decline like this in good times: 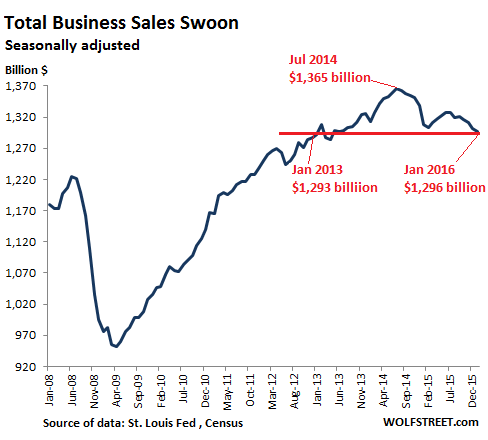 With total business sales declining for a year-and-a-half, you’d think executives get the message and cut their orders to keep inventories from ballooning. But this just hasn’t happened. Optimism has reigned under the motto that next month will be better, that the Fed has our back, that radical monetary policies can somehow increase demand, rather than just inflate asset prices.

And so inventories kept ballooning – in January, by another 1.8% from a year ago to $1.812 trillion.

That’s up 18.5% from the peak of the prior inventory bubble in August 2008. But sales in January were up only 5.8% from their peak in 2008! And we know what happened to sales after that summer in 2008: they crashed as the Great Recession was chilling the US economy. See the cliff-dive in the above chart.

Inventories at retailers, after a lousy holiday season, jumped 5.7% in January year-over-year. As for the formerly booming auto sector, inventories of motor vehicles and parts soared 8.1%.

Whacked by declining sales and rising inventories, the crucial Inventory-to-Sales Ratio, which is a measure of how overstocked businesses have become, has totally blown out. At 1.40 in January, it is much worse than the ratio of 1.32 in September 2008, the month when Lehman filed for bankruptcy: 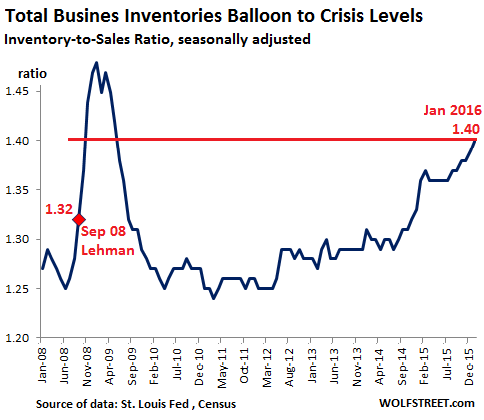 What happened then is this: Sales cratered, inventories built up, and the inventory-to-sales ratio spiked, ultimately hitting 1.48 in January 2009. Businesses, seeing that sales alone wouldn’t solve their inventory problem, were radically cutting their orders. This ricocheted through the economy, with entire supply chains coming to a near-halt as other businesses, whose own sales were getting cut by their customers, adjusted by slashing orders further and laying off people in massive numbers. These layoffs hit retail sales. And so it went.

Ironically, rising inventories inflate GDP. At first, economists hype it as a sign of “confidence.” Businesses are stocking up for the future boom. Much of the increase in GDP in late 2014 and throughout 2015 was based on rising inventories. But rising inventories just pull future economic activity into the present. They tie up a lot of capital, cost money and manpower to store and maintain, and can lose value to obsolescence. This is not exactly a secret. A whole science has sprung up to keep inventories low.

Businesses will eventually figure out that hope for a sales boom isn’t good enough, that sales won’t grow enough to bring inventories back in line. And just then, at the worst possible time, when profits and sales are already declining, they cut their orders to fix their inventory imbalances. This hits sales of their suppliers, and they cut their orders. As this ricochets through the economy to employment and retail sales, it cuts into GDP, as it did during the Financial Crisis, or to a lesser extent during every business cycle recession.

This is what’s in store, so to speak, for the US economy. There is no escape from inventories that are bloated to this extent: they lead to a recession when they get fixed. Unless the Fed, in a stroke of its usual genius, goes out to buy this excess merchandise as part of its new QE and stashes it on its balance sheet where it can rot quietly.

Not that this inventory fiasco worries the stock market, which has been protected by the magic of Consensual Hallucination, though that may be changing. Read…  For Stocks, a Reality Too Ugly to Behold?

60 comments for “What’s in Store for the Real Economy”