This is going to be a far larger problem than Wall Street realizes.

In early 1983 – the first week of February, to be precise – the inventory of crude oil in the U.S. reached an all-time economic high. I say “economic high” because nominal supply of crude oil has since far surpassed its 1983 number. In fact, current U.S. crude-oil inventory (504 million barrels) is the actual all-time high. Supply today is about 150 million barrels more than total supply in 1983.

Obviously, we have a lot more oil in storage than we’ve ever had before – about 40% more. But nominal supply numbers aren’t as important as you might think. Demand for crude oil in our economy has grown a lot since 1983.

To make a bona fide “apples-to-apples” comparison to today’s supply glut, we should measure the amount of oil supply relative to consumption. In 1983, the number of days’ worth of consumption in the U.S. hit a peak of 33.4. That’s the largest amount of crude oil we’ve ever held in private storage, relative to demand. That’s the all-time highest amount of “economic supply” – supply in relation to actual demand.

Much like today’s glut, the glut of oil from the mid-1980s was caused by a sustained increase in U.S. production. More oil was coming from Alaska’s North Slope. The Trans-Alaska pipeline began operation in July 1977. It had an immediate effect on total U.S. supply.

U.S. oil production grew from 227 million barrels per month in 1977 to almost 270 million barrels per month in July 1986 – an increase in monthly production of 18.9% over nine years. As you might remember, gasoline prices fell to well below $1 per gallon… and we saw a commercial real estate and banking crisis in Texas. Houston real estate didn’t recover for 20 years. 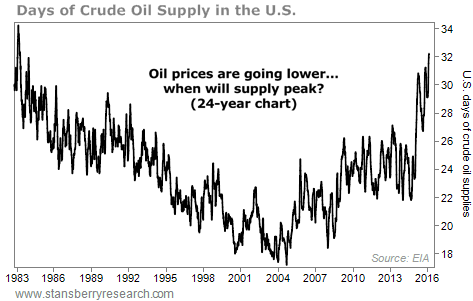 Looking at oil supply relative to consumption, we see that we are still a long way from a bottom in crude-oil prices. History shows that even after days’ worth of supply peaks, oil production is likely to continue to increase for several years, pushing prices lower.

So why do oil companies continue to produce oil even after prices have collapsed and oil can’t be pumped profitably? Why did monthly production continue to increase for three-and-a-half years after the last peak in days’ worth of supply? There are two reasons.

First, even when oil prices don’t support investments in additional supply, producing more oil may be necessary to generate cash flows to stave off bankruptcy. Operating at a loss is better than losing your oil company to creditors.

Second, most of the smaller and midsize oil companies have to hedge their production in order to qualify for their bank loans and lines of credit. According to market-research firm IHS Energy, small energy companies in the U.S. have hedged 47% of their production at prices that average $74 per barrel. Midsize firms are also relatively protected, with 43% of their oil production hedged at $60 per barrel on average. For companies that have hedged a significant amount of their production, there’s still good reason to continue to produce as much oil as possible… at least, for now.

It’s the large energy firms that are most exposed to vastly lower oil prices.

According to IHS, only 6% of large-company oil production is hedged. That’s probably why big U.S. energy companies like Devon Energy (DVN), Pioneer Natural Resources (PXD), and Hess (HES) are being forced to raise cash through equity sales. Keep in mind, selling equity in the midst of a crisis is horrible for existing investors.

Devon sold new shares equal to 15% of its outstanding shares at a 7.8% discount from its previous closing price. The company also announced it’s cutting 20% of its workforce. The stock is now down roughly 75% since we sent Devon’s management an open letter warning that crude prices would inevitably fall, causing huge losses on its huge investments into the Canadian oil sands… 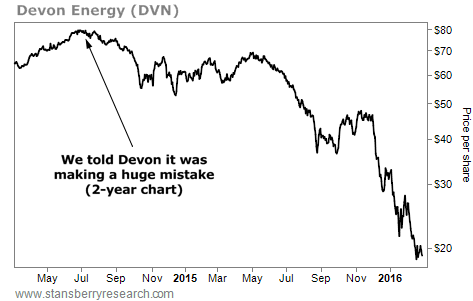 The continuing increases in supply and the industry’s efforts to raise more capital (to continue pumping) show that we aren’t close to the bottom in oil prices. So far, 48 North American energy firms have declared bankruptcy, leaving $17 billion in bad debt. I suspect the final tally of defaults will be far in excess of 10 times this number, with losses approaching the magnitude of last decade’s mortgage crisis.

Few people have realized that the financial problems caused by low oil prices aren’t going away. Everyone, it seems, expects that a quick reversal in oil production will lead to a quick drawdown in supply, and then higher oil prices. But as you can see, production isn’t slowing. Supply is still growing. And supply is now at an all-time high, even when measured against consumption.

This is going to be a far larger problem than Wall Street realizes. By Porter Stansberry, Daily Wealth.