“Fears of an impending liquidity crunch in that asset class.”

“What is happening in this space today reminds me of what happened in mortgage-backed securities in the run-up to the crisis,” U.S. Comptroller of the Currency Thomas Curry warned in October about the auto loan bubble.

And his warning is now becoming reality.

Subprime auto loans aren’t big enough to take down our megabanks, the way subprime mortgages had done. But they’re big enough to take down specialized auto lenders and cause a lot of tears among investors that bought the highly rated structured securities backed by subprime and deep-subprime auto loans that are now defaulting at a rate last seen during the days of the Financial Crisis.

And they’re big enough to knock the auto industry, one of the few booming sectors in the otherwise lackadaisical economy, off its record perch. An auto-loan implosion would start at subprime and work its way up, just like mortgages had done.

The business of “repackaging” these loans, including subprime and deep-subprime loans, into asset backed securities has also been booming. These ABS are structured with different tranches, so that the highest tranches – the last ones to absorb any losses – can be stamped with high credit ratings and offloaded to bond mutual funds designed for retail investors.

Deep-subprime borrowers are high-risk. Typically they have credit scores below 550. To make it worth everyone’s while, they get stuffed into loans often with interest rates above 20%. To make payments even remotely possible at these rates, terms are often stretched to 84 months. Borrowers are typically upside down in their vehicle: the negative equity of their trade-in, along with title, taxes, and license fees, and a hefty dealer profit are rolled into the loan. When the lender repossesses the vehicle, losses add up in a hurry.

Auto loans in general have been in a huge boom that reached $1.04 trillion in the fourth quarter 2015: 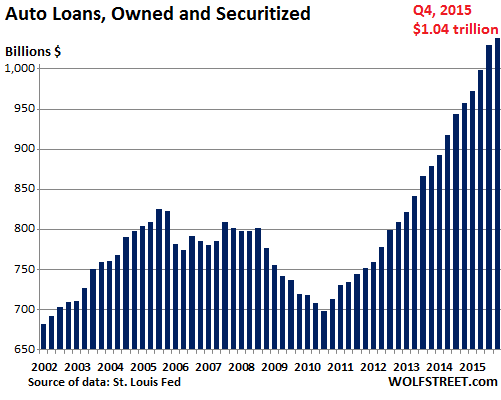 Equifax reported last year that 23.5% of all new auto loans where to subprime borrowers. So unlike the mortgage crisis, subprime auto loans aren’t in the trillions, but in the neighborhood of $200 billion. Many of them have been repackaged into asset backed securities. And these securities are starting to implode.

Auto loan ABS delinquencies reached 4.7% in January, the highest since February 2010, according to data from Wells Fargo, cited by Bloomberg. During the Financial Crisis, delinquencies topped out at 5.4%. During normal times, they range from 2% to 3%.

John McElravey, head of Consumer ABS Research at Wells Fargo Securities, warned that these delinquencies would entail a wave of defaults. The default rate is already skyrocketing. It hit 12.3% in January, up from 11.3% in December, the highest since 2010.

He pointed a several factors, including initial jobless claims in oil states like Texas. The data are worth watching closely, he said, “especially against the backdrop of sub-par economic growth.”

Skopos Financial in Texas is a master at securitizing subprime auto loans. Private Equity firm Lee Equity Partners owns a 97% stake. When Skopos “opened its doors” in 2011, it had “one goal in mind,” as it says on its website, namely, “making tough, deep subprime auto loans easier to finance for dealers.”

In November, it securitized $154 million of subprime and deep-subprime auto loans. Citigroup was the lead underwriter. Over three-quarters of the loans are to borrowers with credit scores under 600. And another 14% have no credit score at all. The highest tranche was awarded lofty ratings of A from DBRS and AA from Kroll Bond Rating Agency.

In this manner, thinly capitalized lenders that came out of nowhere, like Skopos, are offloading the risks to institutional investors, such as your bond mutual fund.

But now, only three months later, Asset-Backed Alert reported that the securities have already “experienced enough collateral defaults to approach a ‘cumulative net loss ratio trigger event’ set by Kroll. Should losses reach that level, Skopos would have to stop collecting excess cash flows and redirect the money to bondholders.”

This would make it “difficult” for the company to keep “doing business as usual” and “virtually impossible” to raise more capital through securitization of its subprime loans.

Sources said other deep-subprime lenders including Go Financial and United Auto Credit face similar pressures due to rising losses among the loans underpinning their securitizations.

And this lightning-fast deterioration of the collateral for these securities is “feeding fears of an impending liquidity crunch in the asset class.”

“For these smaller firms, securitization is their only source of funding in this space,” one source said. “It only takes one deal of theirs to go sideways in terms of performance and they can impact the whole subprime-ABS market.”

The point of building a net-loss-ratio trigger into a deal is to protect bondholders, so investors holding Skopos’ paper aren’t likely to be affected by weakening collateral. But increasing delinquencies and losses among deep subprime borrowers across the board are adding to concerns that the industry is vulnerable to a “perfect storm” of market forces including deteriorating credit quality, declining vehicle-resale values, and rising interest rates.

Hedge funds are already smelling the next “Big Short.” And they’re trying to figure out – though it won’t be easy – how to bet against these securities and against those bond mutual funds that hold them, and that may eventually be forced to dump them into an illiquid market.

34 comments for “It Starts: Subprime Auto Loans Implode (in Your Bond Fund)”