Also let’s clarify upfront that Evan Koenig, Senior Vice President and Principal Policy Advisor at the Dallas Fed, did not forecast a recession. No Fed official, and no economist employed by any Fed entity, would ever publicly do that. For them, publicly, recessions exist only in the rearview mirror. For them, publicly, economic growth goes on forever.

Yet they know what’s going on. They have enormous resources at their fingertips. But by forecasting a recession publicly, they would deflate hype and sap economic confidence and could thus cause a recession – or a market crash. So no way. No recession warning from them, ever.

However, their concerns leave footprints in the economic muck, and this is one of them.

His logic unfolds in his presentation under the section, “The Fallout.” The collapse of the price of oil and the “soaring dollar” had the “expected impact on demand and its composition,” with some winners and losers:

Households benefited from lower energy prices and lower costs of imports, and they could spend these savings on other things (healthcare and rent come to mind, the costs of which have been ballooning). So household spending has “accelerated.”

But capital expenditures by businesses have taken a hit, especially in energy, mining, and manufacturing. The strong dollar has led companies to import foreign-made goods rather than purchase US-made goods. This too is hitting US-based manufacturers.

The “net effect of these conflicting forces has been to boost final demand for domestic product.” But the manufacturing sector is declining at the steepest pace since the Great Recession (“stagnating” is the politically correct term Koenig uses), while the service sector continues to grow. 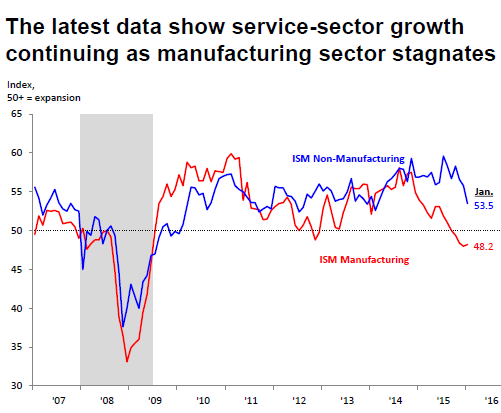 So, at 48.2, manufacturing has been in contraction for four months in a row, according to this index. The service sector, which dominates the US economy, is still growing with the latest reading at 53.5. But that growth has been slowing sharply over the past few months, hence the downward slope of the blue line.


Koenig warns: “This isn’t the first time we’ve seen a sharp cross-sector split: the prognosis is mixed.” He offers the chart below, of the same ISM indices, but going back to the 1990s, which includes the 2001 recession. I circled his phrase, “Prelude to recession”: 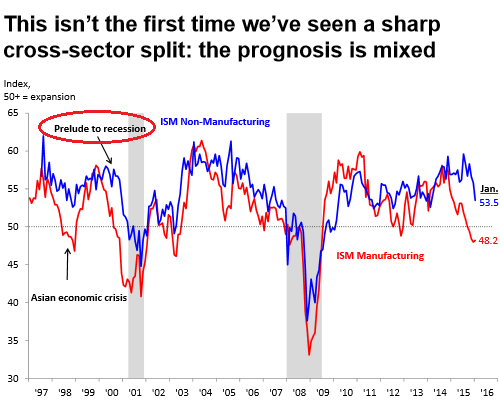 The chart shows how manufacturing led the service sector into the 2001 recession by about a year. Manufacturing was already shrinking when service-sector growth began to waver, then slowed sharply, and finally dropped below 50. That’s when the official recession began.

That “Prelude to recession” came at the point when manufacturing was dropping below 50 while service-sector growth began to slow, though it was still safely above 50.

Next time around, manufacturing too led the downturn, but spread over several years, rather than just one year, with some zigzags in between. Then in December 2007, the manufacturing and service sectors both tanked. That was the official beginning of the Great Recession. They then briefly recovered before falling off the cliff in the second half of 2008.

None of these progressions are going to look alike. This time around, as before the 2001 recession, manufacturing is ahead into the downturn by about a year. Four months ago, the service sector started following. And the current point in time is precisely what a “prelude to recession” looks like.

It would be convenient to extend the blue line down until it reaches 50 and extrapolate that this would be the beginning of the recession. But if this process of declining growth in the service sector continues, it’s unlikely that it will be just a straight extension of the blue line. More likely, it will zig and zag interspersed with small recoveries.

But don’t worry. Koenig points out, the “slowdown in the goods-producing sector has, so far, failed to put a damper on job growth,” given that the unemployment rate, as reported by the BLS, is 4.9%, the lowest since February 2008. And increases in unemployment “have been limited to the oil-producing states (NM, ND, OK, TX, & WY).”

47 comments for ““Prelude to Recession”: the Dallas Fed’s Unsettling Charts”