Retail sales in Texas were a boom machine after March 2010, their low point during the Great Recession. It lasted over five years. Sales tax collections, reported by the Texas Comptroller of Public Accounts, jumped 46% from the first half of 2010 to the first half of 2015. Blinding growth for a mature market!

Given the size of the Texas economy, it helped prop up overall retail sales in the US.

But by mid-2015, the retail sales boom came to a screeching halt. In the second half, sharp year-over-year declines set in. And in December, over the crucial holiday period, retail sales sagged.

Sales tax collections aren’t an ideal gauge. Basic food products like flour, sugar, bread, milk, eggs, fruits, or vegetables are exempt. Taxes on motor vehicle sales and rentals are not included in this tally but are reported separately. The data is not seasonally adjusted, so it can only be compared to the same months in prior years. But it’s an unvarnished approximation of the movements of retail sales.

Sales tax collections lag sales one month. So collections reported for January were for sales in December.

Since sales tax collections lag sales one month, that 3.9% drop for January was for December sales. What a sour holiday period!

This chart by “David in Texas” shows how the boom in sales tax collections since the Great Recession began to sag last year. I circled the months of year-over-year declines (yellow = 2014, green = 2015, dark blue = 2016): 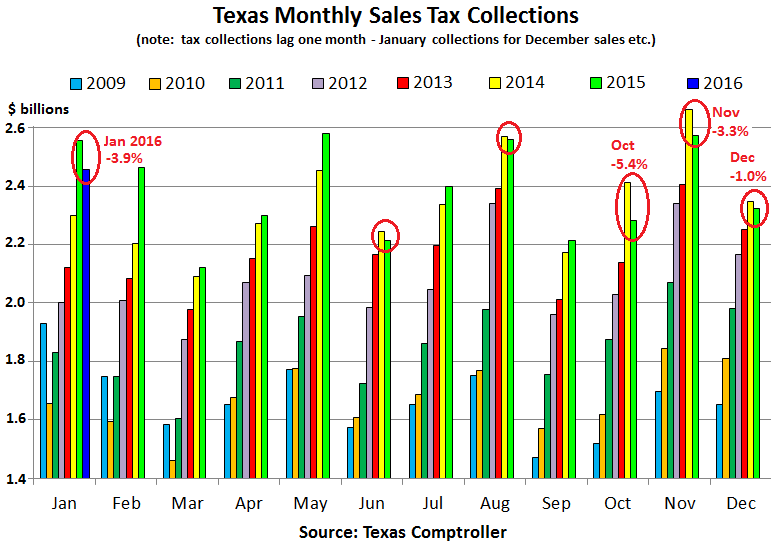 The chart also shows just how phenomenal the retail sales boom in Texas was. It coincided with the oil boom, when West Texas Intermediate traded above $100 a barrel for part of the time, when fracking became the new miracle activity that brought billions of dollars from banks and investors from around the world into the state every year.


This money was drilled into the ground. It was used to build office towers for the booming energy sector and everything that came along with it, such as law firms and engineering firms. It was used to build apartment towers. It drove technology forward and funded innovation. It bought equipment. It fed manufacturers that supplied the oil industry. It paid for the construction of hotels and temporary housing for oil workers even in small towns….

And along the way, the money paid for wages, salaries, bonuses, and royalties, and folks went out and spent this money.

The state government was ecstatic with this influx of cash. Retailers were even more ecstatic and opened new stores. Mall owners were happy. Banks bathed in bliss and extended huge loans to drive this miracle to the next level. Consumers were expressing their happiness by feeding retail profits and state coffers alike.

Retail sales recycled the money and contributed to the strong Texas economy. Everything went right – until the price of oil plunged.

Now oil and gas companies are going bankrupt. Manufacturers and service providers that supply the oil and gas industry are sinking into the mire. People are getting laid off, from retail workers to high-level engineers in the energy sector. And sagging retail sales indicate that these folks, and others around them, are closing their wallet or that they’ve maxed out their credit cards after losing their jobs.

And commercial real estate is getting hit. Debt is everything in the sector. So this is going to be a problem for banks. The entire math is based on high rental rates and low vacancy rates. But in Houston, rental rates are falling and vacancy rates are skyrocketing. Sublease space has spiked 69% and continues “to sit on the market,” even while new towers are being completed. “See-through buildings” are re-appearing — that infamous phenomenon of vacant and transparent buildings dotting Houston’s business district during the last oil bust. So watch the banks. Read… Office Market in Houston Melts Down