Schäuble tries to soothe nerves, but the plunge gets worse.

The Stoxx 600 Europe Banks index dropped to the lowest level since the gloomy days of the Eurozone debt crisis in 2012. At the time, Draghi’s whatever-it-takes pledge kicked off a bank rally. When it petered out, Draghi came up with negative deposit rates and QE, which in early 2015 kicked off another bank rally. But it all came unglued around July 31. Since that propitious date, the index has plunged 40%.

Yet among the big banks, Deutsche Bank is the trailblazer. And they’re all trying to prop it up in a concerted effort that is eerily reminiscent of the efforts during the early stages of the Financial Crisis. The reassurances have now ascended to Finance Minister Wolfgang Schäuble. When Deutsche Bank is under attack, everyone’s got to stick together.

“No, I have no concerns about Deutsche Bank,” he told Bloomberg TV on Tuesday without further elaborating, after a meeting in Paris of French and German finance gurus, where they’d probably discussed how to deal with the sprouting banking crisis.

Bundesbank President Jens Weidmann, also at the meeting, said that the “financial-market volatility we are seeing is an expression of the uncertainty, of these risks to growth.” But he refused to comment on Deutsche Bank.

Co-CEO John Cryan has been out there for weeks, reassuring investors. To no avail. This morning, in his desperation, he sent a message, ostensibly to employees, which was posted in German and English on Deutsche Bank’s website for all the world to read. And it included this morsel:

You can tell them that Deutsche Bank remains absolutely rock-solid, given our strong capital and risk position.

He fooled much of the media that picked up the “absolutely rock solid” part and failed to see the “tell them” part. But he apparently didn’t fool investors.

On Monday, we took advantage of this strength to reassure the market of our capacity and commitment to pay coupons to investors who hold our Additional Tier 1 capital. This type of instrument has been the subject of recent market concern.

It’s precisely this “Additional Tier 1” capital, or “AT1,” that has collapsed. His repeated reassurances with their escape clauses and the help from Schäuble only accelerated the collapse.

To prop up Tier 1 capital, Deutsche Bank was arm-twisted into raising nearly €20 billion in 2010 and 2014, most of it by selling shares, which diluted existing shareholders. It also issued the equivalent of €4.6 billion in “contingent convertible bonds,” spread over four issues in dollars, euros, and pounds.

CoCo bonds are designed to be “bailed in” first when the bank gets in trouble so that taxpayers don’t have to be shanghaied to do the job. They’re perpetual bonds, so they have no maturity date, and investors are not promised they’ll ever get their money back, though the bank can redeem them, usually after five years. Annual coupon payments are contingent on the bank’s ability to keep its capital above certain thresholds. If the bank doesn’t make that coupon payment, investors cannot call a default; they just have to get used to it. And if the bank’s capital drops below certain thresholds, these bonds are going to get “bailed in,” that is they convert automatically to the banks’ increasingly worthless shares.

In return for these risks, these bonds pay a seductive coupon of 6% or higher, which is why investors, stuck in the ZIRP or NIRP quagmire, jumped on them. Now they’re ruing the day!

For investors, those CoCo bonds have been a fiasco. For example, the 6% euro CoCo bonds, which traded at 104 cents on the euro in early 2014 shortly after they’d been issued, and that still traded at 102 in April 2015, have collapsed. When I last wrote about them on February 1, they’d already plunged to 84.11 cents on the euro. After today’s reassurances, they dropped another 3.2% to 70.27, down a dizzying 32.4% from their peak. Over the past seven trading days, they’ve plunged 21%: 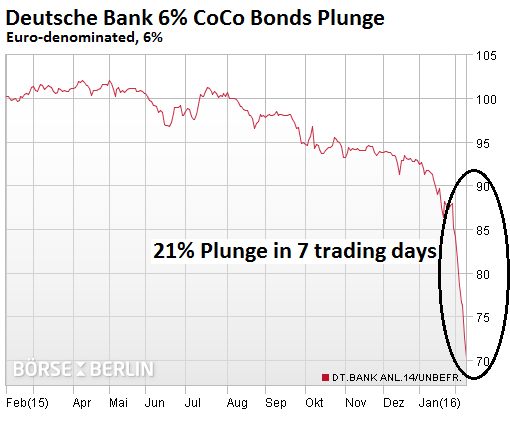 One thing is clear from the chart: The more the bank and the German government talk about “rock solid” and “no concerns,” the shakier the bank gets.

The crashing shares and CoCo bonds have a gloomy significance. Deutsche Bank is expected to have to raise more capital to rebuild its buffer, fund more losses on its loan book, fill the holes left behind by asset values that have gone up in smoke, and pay more legal settlements for things for which it keeps getting caught – as Cryan said in his message today, “We will almost certainly have to add to our legal provisions this year….”

This capital will have to come from selling shares or CoCo bonds. With both crashing, selling shares is going to be highly dilutive to existing shareholders and pressure shares further; and selling CoCo bonds, when the existing 6% issue trades for about 70 cents on the euro, if it doesn’t crash further, will be nearly impossible.

And this is one of the reasons banks in Europe – and even elsewhere – are getting mauled: there is no longer any appetite in bailing out shareholders and bondholders with taxpayer or central-bank money, as it was done during the Financial Crisis.

Deutsche Bank investors are now feeling the consequences of regulations that specify for the first time that investors in megabanks are explicitly at risk, that taxpayers won’t automatically backstop every crime and misbehavior and every bad bet and all the ludicrous risk-taking by banks, that a bank crisis will involve stockholders and some bondholders first. And that is, for these investors that have been bailed out so many times before, a very unsettling idea. And they’re bailing out, so to speak, before they get bailed in.