“Would be foolish to rule out a similar if not a more devastating outcome.”

The US dollar has soared against other currencies, or these currencies have fallen or crashed against the dollar, whichever way we look at it. And economists are trying to explain that phenomenon.

With commodities-linked currencies, like the Canadian dollar, the Aussie dollar, and the Norwegian krone, the commodities rout was blamed. In addition, the Bank of Canada is fighting its own currency war against the US, Canada’s primary trading partner. It’s trying to demolish the loonie by jawboning it down, rather than resorting to QE like other central banks are doing. [Bank of Canada Crushes Loonie, Created Mother of All Shorts].

Among developed market currencies, the Canadian dollar and the Norwegian krone had fallen the most, both down about 16% for the year. But the euro is not a commodities-linked currency, nor is the UK pound, or the Swedish krona, and they too swooned against the dollar. The euro lost over 10% last year, which brought its two-year loss to about 27%, the worst two-year swoon in the euro’s illustrious history, a satisfactory result of the ECB’s publicly declared currency war against the rest of the world.

The Fed has waffled and flip-flopped about raising interest rates all last year before finally announcing a barely perceptible quarter-point hike in December, while other central banks went the opposite route, with more QE and even negative deposit rates. That divergence in monetary policies caught some of the blame.

But wait…  the Japanese yen, crushed as it had been in prior years, actually remained nearly stable against the dollar in 2015, despite the Bank of Japan’s mega-QE and forever-zero-interest-rate policy. So blaming diverging monetary policies goes only so far before it too falls apart.

But here’s the thing: the big money-making trade, one of the few things that worked in 2015, is long the dollar short everything else. And everyone has jumped on the same side of the boat.


The folks at Economics and Strategy, National Bank Financial, a division of National Bank of Canada, pointed out just how lopsided that trade has become:

“Non-commercial” net long positions on the USD averaged well over 55,000 contracts last year, a record high. The euro and commodity currencies such as the Canadian dollar and Australian dollar were the main victims of such a bet with record net shorts.

The left chart below shows the huge spike in long positions on the US dollar. The right chart shows the record net short positions on the euro, the Aussie dollar, and the Canadian dollar. Particularly the euro was the favorite short target: 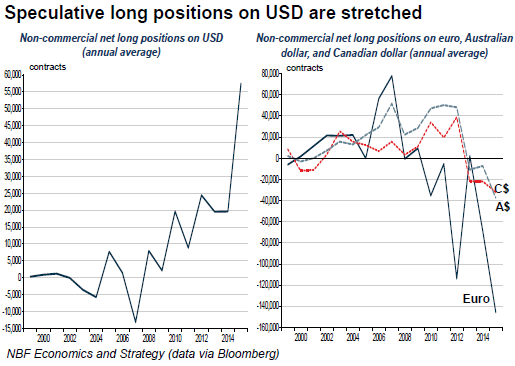 How much more can pile up all on the same side of the boat before it tips possibly with terrific global consequences? The economists at Economics and Strategy:

We believe the USD is now close to peaking. The trade-weighted greenback looks stretched after gaining about 20% over the last two years. The last time the USD saw a similar surge, it didn’t end up well for the global economy.

That “last time” was 1997. After years when governments and corporations in developing economies had borrowed in dollars, the surge of the dollar triggered massive currency outflows from those countries and all kinds of financial crises, including the big one at the time, the Asian Financial Crisis.

“It would be foolish to rule out a similar if not a more devastating outcome,” the economists at Economics and Strategy wrote.

Now, after seven years of the Fed’s ingenious interventions, the issue is more massive than ever. The dollar-denominated debt – loans and bonds – owed by non-bank borrowers outside the US has soared to $9.8 trillion at the end of the second quarter, according to the Bank for International Settlements. It has quadrupled since the Asian Financial Crisis and nearly doubled since the 2008 Global Financial Crisis. In relative terms, it has soared to nearly 18% of global GDP excluding the US, up from 8% just before the Financial Crisis.

These entities have all made the same bet: that the dollar would not rise, and that US interest rates would remain low. The Fed encouraged them to make that bet. But now, with the dollar soaring and US interest rates rising, even if only a tiny bit, that bet has flipped. Now for entities that do business in beaten down currencies, it’s getting increasingly difficult to service their dollar debts while dollar-denominated capital – the hot money – is receding from those places.

This leaves the world in a precarious situation: currency bets have lined up with overwhelming weight long the dollar and short everything else, while non-US corporate and government entities owe nearly $10 trillion in dollar debt, a huge bet on the other side. There isn’t going to be a smooth and easy unwind. And chances are that the dollar will get knocked off its perch in the process.

So… “It’s hard to be bullish about the global economy these days,” the National Bank Financial, reported. Read…  World Trips Over the Explosive Dollar

38 comments for “What Will Knock the Dollar off its Perch?”