On the first trading day, all heck breaks loose.

In China, stocks crashed on day one of 2016. No one really knows why. Some hardy souls blamed the manufacturing index that came in even lousier than in November. But manufacturing has been consistently lousy, and bad numbers are nothing new and not a reason for the sudden plunge in stocks.

Whatever the reasons, the Shanghai Composite plunged 6.9%, the Shenzhen Composite 8.2%. At that point, panicked authorities halted all trading via a circuit breaker announced in December. Everything is stuck. No one knows what any of these stocks are worth. Not exactly a confidence-inspiring move.

And in one single day, the indices blew a big part of their gains since the crash last summer. This rattled investors in other parts of Asia. The Japanese Nikkei dropped 3.1%, Hong Kong’s Hang Seng 2.7%.

Red ink instantly bled into Europe, covering all major indices. Among them, the German DAX was the biggest loser, down 4.3%. Germans in general are leery of the stock market and prefer to keep their money in the bank or plow it into real estate. But the DAX is the favorite playground for US mutual funds, ETFs, and hedge funds. And they’re suddenly getting cold feet in this happy New Year.

So this is what investors in the US woke up to, after having already been kicked around in 2015.

The promised and much ballyhooed, and often reliable Santa Rally lasted only three miserable low-volume days right before Christmas, after weeks of selling, and before getting destroyed entirely in the final days of the year. It left the US indices in the red for December, a bitter disappointment for Wall Street soothsayers that had screamed in unison since fall, buy buy buy the coming Santa Rally.

It isn’t what folks have been hoping for after a year when the only thing that seemed to make money was shorting anything related to energy and commodities, going long the hated dollar, and loading up on the 10 mega caps that propped up the S&P 500. Without those 10 stocks, the S&P 500 would have been deeply in the red, rather than only slightly in the red.

The entire commodities space got hammered last year. This chart from the EIA shows the bloodletting that transpired by sector in industrial metals, precious metals, grains, and energy: 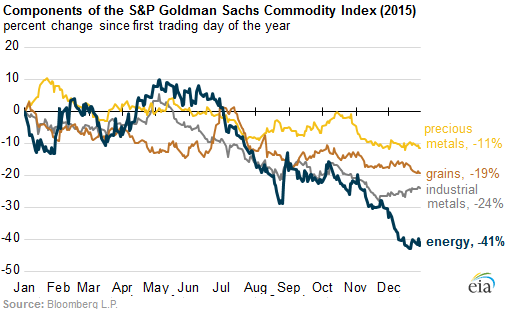 And this EIA chart shows the rout by individual commodity, color-coded by sector: 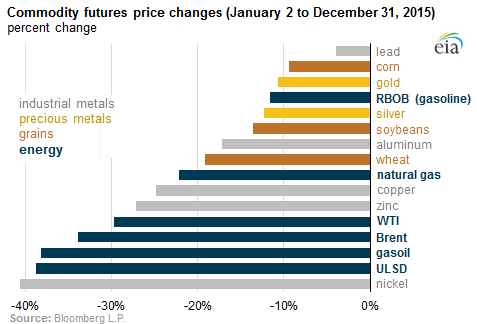 Today doesn’t look promising either so far, with the price of crude oil sinking. Even as the first tanker loaded with US crude left Corpus Christi to deliver the previously forbidden cargo to the world, WTI dropped 1.5% to $36.50 a barrel. The hoped-for salvation of the US oil sector might have to wait another day.


Everyone was looking forward to the New Year, when this great injustice would end, the injustice of markets doing things other than soaring, despite ongoing central-bank stimulus around the globe with zero-interest-rate and negative-interest-rate policies ruling the day, and with QE still flooding the Eurozone and Japan with freshly printed money.

The Economics and Strategy team at Canada’s National Bank put it this way in their BNF Economic Monitor:

Good riddance 2015. The global economy’s performance was the worst in six years despite a massive stimulus to consumers around the world courtesy of lower energy prices and highly stimulative monetary policy. As it turns out, those boosters were offset by headwinds generated by China’s rebalancing towards a more service-oriented economy which proved more challenging than first thought, particularly for trading partners in emerging economies. The bad news is that those headwinds will continue to restrain growth in 2016.

And now on the first trading day of this glorious year 2016, we get a morose data dump:

The Markit US Manufacturing PMI for December dropped to 51.1. Though still barely in expansion mode, it was the lowest since October 2012, on a “near-stagnation in new business volumes.” New orders grew at “the weakest pace since September 2009.” The report added these morsels:

The manufacturing sector saw a disappointing end to 2015, and its plight looks set to continue into the New Year as headwinds show no sign of abating any time soon. Order book growth has stalled as producers report some of the toughest trading conditions since the end of the global Financial Crisis.

The ISM’s Manufacturing Report on Business for December is even gloomier. It dropped to 48.2, now in contraction mode for the second month in a row, with the sub-indices of New Orders, Inventories, and Production and Employment all contracting.

And in Canada, which spent 2015 flirting with more than just a technical recession, the RBC Manufacturing PMI offered some special treats this morning, as it dropped to 47.5 for December, in contraction mode for the fifth month in a row.

Ironically, Canada is supposed to be one of the beneficiaries of the strong dollar. The loonie has plunged 17% against the greenback in 2015, and earlier today hit $0.7152, a low not seen since 2004. The US is by far Canada’s largest export target, and exports of goods manufactured in Canada should boom. But no. The RBC PMI report:

The latest PMI reading was the lowest in just over five years of data collection, largely reflecting weaker contributions from the output, new orders, and employment components.

Business conditions in the Canadian manufacturing sector fell at a survey-record pace in December as weaker domestic demand and ongoing uncertainty in the energy sector continues to take its toll.

So this eagerly awaited year 2016, when all the market wrongs of 2015 would be rectified, and when central banks would once again be able to push markets higher with their scorched-earth monetary policies and their verbal manipulations, begins very inauspiciously with just a touch of mayhem.