After the Fed raised the target for the federal funds rate on Wednesday from nearly zero to barely above zero, stocks rocketed higher and hopes pervaded the market that rising rates would somehow be good for stocks, just like zero-interest-rates had been good for stocks – that in fact anything is good for stocks – a theory proffered in great detail at every sell-side corner of Wall Street. But it was a half-day miracle.

Then everything came unglued.

It didn’t help that the propitious moment coincided with the expiration of stock and index options contracts – “quadruple witching.” And so the normally quiet last Friday before the holidays spilled lots of red ink in heavy trading volume.

The Dow dropped 367 points, for a two-day loss of 623 points, or 3.5%. Volatility is back: over the 14 trading days so far in December, there were 12 when the Dow moved 100 points or more between the close of one day and the close of the next, the most volatile December since 2008.

The Nasdaq dropped 2.9% since the Fed’s half-day miracle and ended once again below that magic 5,000.

“Expectations of a Santa Rally did not become reality this week,” explained Jill Mislinski of Advisor Perspectives to introduce this five-day chart of the S&P 500. It shows the Fed rally and the debacle since then. Note the spikes in volume at the beginning and end of trading on Friday: 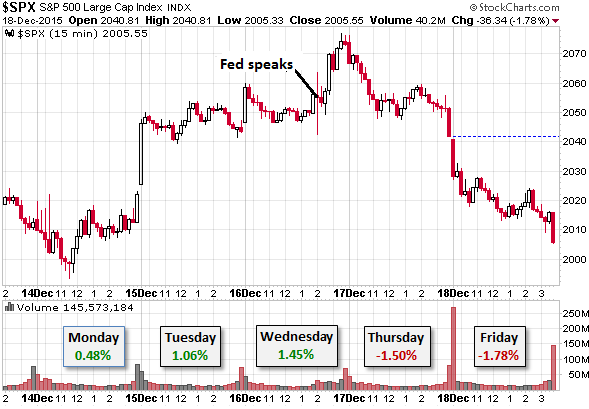 Another week with no Santa Rally.

For the week, the Dow fell 0.8%, the S&P 500 0.3%, and the Nasdaq 0.2%. Wall Street soothsayers promised there’d be a Santa Rally. They brandished calendars and probabilities to bamboozle people into buying. We need it desperately: stocks have gone absolutely nowhere since September 5, 2014. We’re already sorely missing QE. And now we’ve got to deal with rate hikes!

Contrary to the hype that financial stocks would benefit particularly from rate hikes, they got hammered on Friday. They were the worst-performing sector in the S&P 500. The iShares US Financial Services ETF dropped 2.5%, the KBW Nasdaq Bank Index 2.9%. JPMorgan fell 2.8%; Wells Fargo 3.0%; Bank of America 3.1%; Warren Buffet’s finance and insurance empire Berkshire Hathaway 3.3%.


And junk bonds, the harbinger for the stock market? They’d gotten bludgeoned in prior weeks. A week ago, the iShares High-Yield Corporate Bond ETF HYG hit the lowest level since the euro-debt crisis of October 2011, and the days of 2009. Then the first major bond debacle happened since the Financial Crisis… It Starts: Junk-Bond Fund Implodes, Investors Stuck.

But Wall Street soothsayers came out in force to explain that these bonds where the buys of a lifetime, a rare opportunity to buy these superb investments at the end of the credit cycle, when the hot air is audibly hissing out of the Great Credit Bubble. Even Janet Yellen came to the defense of junk bonds, explaining during her press conference that the bond fund implosion was just a one-of-a-kind thing.

So junk bonds rallied earlier in the week. But by mid-week, they lost their footing again, especially at the riskiest end. And so the S&P U.S. Distressed High Yield Corporate Bond Index, which tracks bonds whose yields are 1,000 basis points (10 percentage points) above Treasury yields, dropped two more points this week, to 56.8, a 44% plunge from August last year. Looking increasingly ugly:

In the broader junk-bond market, a similar pattern appeared as investors, ornery as they are, developed a will of their own – and sold. The HYG dropped again, landing on 79.53, on its way back to the dreadful levels of a week earlier.

The already beaten-down Canadian dollar plunged to US$0.716, after 10 days of nearly uninterrupted declines, the lowest level since early 2004. It now costs C$1.40 to buy one lousy greenback. In 2012, they were at parity. The loonie has lost 17% year-to-date against the US dollar, the worst annual decline since crisis-year 2008, when it fell just over 18%. It’s all part of the Bank of Canada’s currency war, its very vocal, well-planned, willful destruction of the loonie.

Crude oil got knocked down too, with WTI losing 2.5% for the week, now at $34.55. US natural gas, which has traded below the cost of production for most of the past seven years, has gotten completely destroyed, hitting the lowest price since March 23, 1999. But fracking is costly, and the entire industry has begun the painful process of eviscerating its gullible investors.

This too is a Fed-induced phenomenon. Over the years, money kept flowing into the industry despite the low price of gas and endless negative cash flows. In this Fed-designed world of zero-interest-rate policies, when risks no longer mattered, drillers were able to borrow new money from banks and bondholders and drill it into the ground. Production soared, as did hype and hoopla on Wall Street, and more money poured in, and this money too has now disappeared. Read… Carnage in US Natural Gas as Price Falls off the Chart.

20 comments for “What the Heck Happened to Our Santa Rally?”