It got clobbered by the commodities rout, given their importance to the Canadian economy, the multi-year decline in the prices of metals, minerals, and natural gas, and then starting in mid-2014, the devastating plunge of the price of oil.

That the Fed has tapered QE out of existence last year and has been waffling and flip-flopping about rate hikes ever since made the until then beaten-down US dollar, at the time the most despised currency in the universe, less despicable – at the expense of the loonie.

Those factors would have been enough to knock down the loonie. But it wasn’t enough, not for the ambitious Bank of Canada Governor Stephen Poloz. The man’s got a plan.

He is in an all-out currency war. He’s out to crush the loonie beyond what other forces are already accomplishing. He’s out to pulverize it, and no one knows how far he’ll go, or where he’ll stop, or if he’ll ever stop. He has single-handedly created the short of a lifetime.

It should spook every Canadian with income and assets denominated in Canadian dollars and Canadians wanting to buy a home in their country (we’ll get to that bitter irony in a moment).

Poloz has been in office since June 2013, and this is what he has accomplished so far: 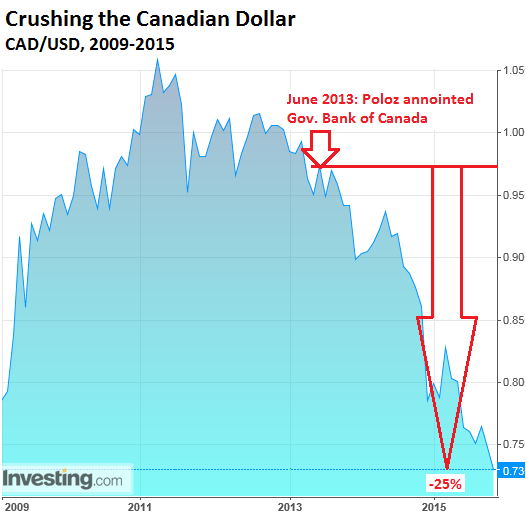 One reason for pulverizing the Canadian dollar is to boost revenues and earnings of exporters. They get to translate their foreign-currency revenues into Canadian dollars on their financial statements. And analysts love that. It doesn’t matter how the bigger numbers got there, whether by inflation or devaluation, as long as they’re bigger.

And Canadian stocks could use some help. Despite the destruction of the loonie, the Toronto Stock Exchange index TSX has plunged 18% since its peak in June 2014 and is now back where it had been in September 2013.

So Poloz is trying to get Canadian workers to be able to compete with workers in Mexico and China and Bangladesh, and with those beaten-down wages in the US.

Alas, the Mexican peso too has gotten crushed. But ironically, the Bank of Mexico is spinning in circles to halt the decline. It’s selling its limited dollar reserves and buying pesos to prop up its currency, even as Canadians watch helplessly as their own currency descends into banana-republic status – something the US dollar used to excel at when the Fed was on its path of total dollar destruction.

In April, he defended the use of the word “atrocious,” explaining, “It’s certainly not our intent to surprise or to frighten people.” He’d simply “wanted markets to understand that we already believed that the quarter was going to look quite poor….” It whacked the loonie.

In July, he explained that the “global economic developments have been quite disappointing,” that they led “to a significant downgrade” for Canada’s economy, and that the collapse in oil prices was eating into the economy at the worst possible moment, when it was undergoing a “significant and complex adjustment.” It whacked the loonie.

He keeps up the good work. He’s just never satisfied with it – always tries to perfect it, like a meticulous artist.

On December 8, Poloz warned out of the blue, with no one having even considered it, that the Bank of Canada was considering negative interest rates.

During the Financial Crisis, the Bank of Canada had maintained that a positive 0.25% would be the lowest possible rate; otherwise, certain corners of the financial markets, such as money markets, might collapse. But not anymore.

“The bank is now confident that Canadian financial markets could also function in a negative interest rate environment,” he said. He stressed that the bank had no intention at the moment to do so. But “it’s prudent to be prepared for every eventuality.” The loonie had already gotten whacked the day before in anticipation. And upon his words, it got whacked again.

But that still wasn’t enough. On Thursday, indefatigably, he told the new government to crank up deficit spending: “As Keynes noted as he watched the Great Depression unfold, fiscal policy tends to be a more powerful tool than monetary policy in such extreme circumstances,” he said, adding, “The effectiveness of monetary policy has its limits once interest rates reach very low levels….”

The next day, the loonie got whacked 1%.

These are just examples. Poloz does this all the time. Unlike the Bank of Japan and the ECB, which also face economic challenges, the Bank of Canada is able to destroy its currency without having to resort to mega-QE. It destroys it verbally. The oil price collapse helps, but it’s still true art.

But pulverizing the loonie so consistently, predictably, and forcefully – while it makes for the mother of all shorts – has some side effects, and perhaps that’s part of the plan too. It makes it cheaper for Chinese investors, whose currency has risen in near-lockstep with the “strong dollar,” to buy Canadian assets, such as government bonds – and real estate in one of the most glaring housing bubbles on earth.

Home prices jumped 9.3% in Toronto and 9.8% in Vancouver year-over-year in November, according to the Teranet-National Bank House Price Index, but only for Canadian buyers who earn their keep in Canadian dollars. For Chinese buyers who obtain their wealth, by hook or crook, in yuan, prices dropped as the loonie plunged 12.5% against the yuan over the 12-month period.

And when Canadians finally can’t buy anymore, when the housing bubble begins to hiss hot air, maybe that’s when Poloz will get serious about negative interest rates, driving down the loonie even further and making Canadian real estate even cheaper for Chinese buyers, who then flood in and push up prices, thus moving these homes even further out of reach for most Canadians, all in order to boost earnings per share of some exporters.

“It’s hard to be bullish about the global economy,” reported the National Bank of Canada. Read…  World Trips Over the Explosive Dollar

52 comments for “Bank of Canada Crushes Loonie, Created Mother of All Shorts”