Investors bloodied as the Credit Bubble implodes at the bottom

Investors, lured into the $1.8-trillion US junk-bond minefield by the Fed’s siren call to be fleeced by Wall Street and Corporate America, are now getting bloodied as these bonds are plunging.

Standard & Poor’s “distress ratio” for bonds, which started rising a year ago, reached 20.1% by the end of November, up from 19.1% in October. It was its worst level since September 2009.

During the Financial Crisis, the distress ratio fluctuated between 14.6% and, as the report put it, a “staggering” 70%. So this can still get a lot worse.

The distress ratio of leveraged loans, defined as the percentage of performing loans trading below 80 cents on the dollar, has jumped to 6.6% in November, up from 5.7% in October, the highest since the panic of the euro debt crisis in November 2011.

The distress ratio, according to S&P Capital IQ, “indicates the level of risk the market has priced into the bonds. A rising distress ratio reflects an increased need for capital and is typically a precursor to more defaults when accompanied by a severe, sustained market disruption.”

This chart shows the deterioration in the S&P distress ratio for junk bonds (black line) and leveraged loans (brown line). Note the spike during the euro debt-crisis panic in late 2011: 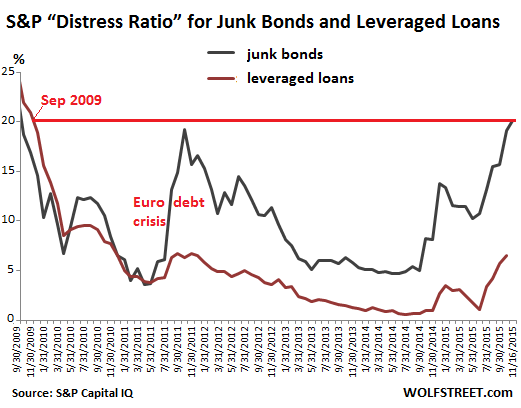 Both show how credit ratings are slow to catch up with reality. S&P still rates Chesapeake B- and Linn B+. Only 24% of distressed issuers are in the rating category of CCC to C. The rest are B- or higher, waiting in line for the downgrade as the noose tightens on them.

The metals, mining, and steel sector has the second largest number of distressed issues and sports the highest sector distress ratio (72.4%), with nearly three-quarters of the sector’s junk debt trading at distressed levels. Among the biggest names are Peabody Energy with $4.7 billion in distressed debt and US Steel with $2.2 billion.

These top two sectors account for 53% of the total distressed debt. And now there are “spillover effects” to the broader junk-rated spectrum, impacting more and more sectors. While some sectors have no distressed debt yet, others are not so lucky:

How much have investors in distressed bonds been bleeding? S&P’s Distressed High-Yield Corporate Bond Index has collapsed 40% from its peak in mid-2014: 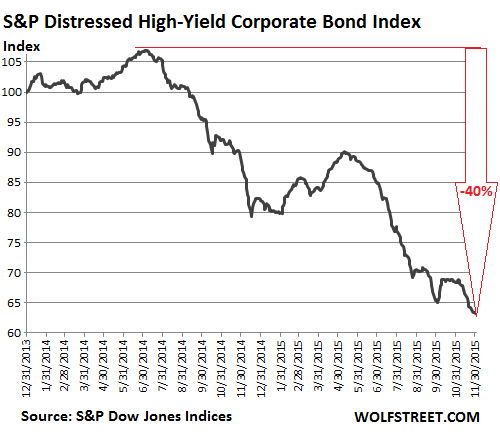 In terms of investor bloodletting: 70% of all distressed bonds are either unsecured or subordinated, the report notes. In a default, bondholders’ claims to the company’s assets are behind the claims of more senior creditors, and thus any “recovery” during restructuring or bankruptcy is often minimal.

At the lowest end of the junk bond spectrum – rated CCC or lower – the bottom is now falling out. Yields are spiking, having more than doubled from 8% in June 2014 to 16.6% now, the highest since August 2009: 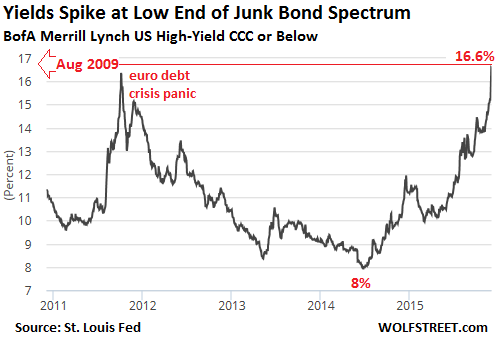 These companies, at these yields, have serious trouble raising new money to fund their cash-flow-negative operations and pay their existing creditors. Their chances of ending up in default are increasing as the yields move higher.

This is what the end of the Great Credit Bubble looks like. It is unraveling at the bottom. The unraveling will spread from there, as it always does when the credit cycle ends. Investors who’d been desperately chasing yield, thinking the Fed had abolished all risks, dove into risky bonds with ludicrously low yields. Now they’re getting bloodied even though the fed funds rate is still at zero!

Other high-risk credits, such as those backed by subprime mortgages, will follow. And the irony? Just in the nick of time, subprime is back – but this time, it’s even bigger. Read…  Subprime “Alt”-Mortgages from Nonbanks Run by former Countrywide Execs Backed by PE Firms Are Booming