A new era has begun for the US and global economy.

A new era has begun for the US and global economy, trashing the simple rules of the post-WWII era. Instead of the business cycle (the “clock” analogy found in textbooks), we have secular stagnation interrupted by frequent bubbles alternating with bouts of debt deflation that are fought by massive government stimulus programs.

Since we have no playbook for this new economic regime, investors must watch the data. Bulls look at signs of strength; bears focus on signs of weakness. Survivors look at broad indicators, showing the net effect of the many cross-currents affecting the economy. The number of new claims for unemployment is among the best: close to real-time (weekly), hard data, and a leading indicator.

But we want to see the change in the trend, which will show us inflection points. Here is the percent change year-over-year in the seasonally-adjusted four-week moving average. 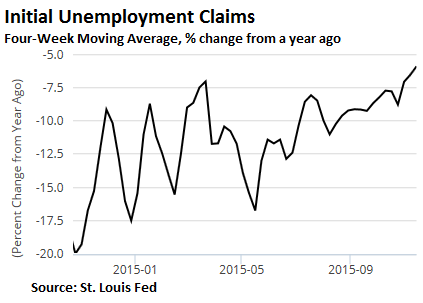 The decline in the number of new claims confirms the good news from the monthly employment surveys. But the rate of improvement is slowing fast, confirming the signs of slowing seen in other broad indicators (e.g., retail sales, industrial production, the corporate revenue recession, trade). This is typical of an old expansion, and at 6 1/2 years, this is an old expansion.

So signs of slowing, but few signs of an imminent recession. This means the growing stress in weak sectors — such as energy, mining, manufacturing, and retail — has not seriously hurt the growing sectors, such as services, or stable ones such as utilities and government.

If the trend continues at the current rate, in three or four months unemployment claims will begin to increase. Or sooner, as claims often rise at an accelerating rate as the economy slows (they increased 5.6% in January 2009).

What about other measures of employment?

The other major measures of job activity are changes in total employment and the unemployment rate. The former is a coincident indicator, heavily revised. The latter is a lagging indicator, difficult to interpret due to changes in demographics and the work force.

Computers make available a host of sophisticated indicators to burn away your time. Such as the number of listings for new jobs, the JOLTs reports, and the Beveridge curve (unemployment vs. job vacancies). These high-end metrics track obscure and changing economic relationships. Twenty years from now, economists will use them to explain what’s happening to us, but today they are just chaff in our vision.

The process of hiring and firing is changing (a sign of regime change). It costs nothing to list a job electronically. Hiring independent contractors and temps today is radically different than hiring unionized workers in 1980. Executives at modern corporations like Amazon and Wal-Mart can fire thousands with a keystroke, changing the algorithms that control their workforce. They worry less about strikes than about an asteroid impact on their HQ.

You’ll gain more by taking a long walk each day to think than by looking at such complex metrics unless someone is paying you to look at them.

There are no crystal balls. All useful economic signals (i.e., leading and coincident indicators) give false alarms, such as those shown in the chart below in 1985, 1996, and 2005. Note the correct alarms in 1990 and 2000 (blue ovals). Economic indicators are useful only in combination, much like paints used to make a picture. 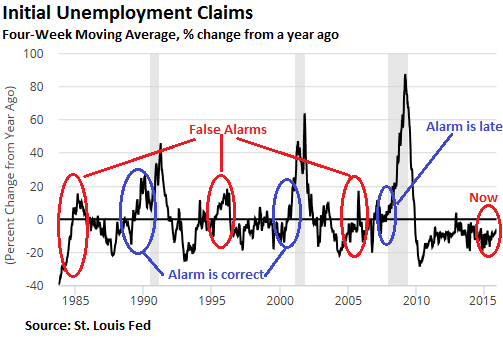 The Great Recession arrived like a “thief in the night,” as shown by the decline in the broad stock market. The Wilshire 5000 index peaked in October 2007, on the eve of the recession. But even by September 2008, 11 months later, it still had not become a bear market (a 20% decline). In early 2008, gurus worried about rising inflation. Then the system crashed.

This might be the new pattern in an economy for which we lack a handbook. We react by looking at the past, and so we get surprises. In this recovery, that has meant false predictions of consumer price inflation and a US dollar collapse. Instead, we got rampant asset price inflation. It also meant repeated false predictions of liftoff to escape velocity. In a downturn that means we quickly go from everything under control to OMG.

To win in the new era, watch the data without preconceptions, and expect the unexpected. By Larry Kummer, Editor of the Fabius Maximus website.

The dollar is hitting the economy in its soft underbelly. Read… Fed’s Vice Chairman Gives a Warning, US Factories Agree