The dollar’s hit to the economy.

Fed Vice Chairman Stanley Fischer gave us a warning in a speech on Nov 12. He’s someone we should listen to.

He reported that since July 2014 the US dollar has risen aprox 15% vs. the currencies of our major trading partners, a “large, though not unprecedented” move. The Fed’s econometric model shows that a 10% dollar rise reduces exports by 3% after one year and 7% or more after three years. It increases real imports by 4% after three years. 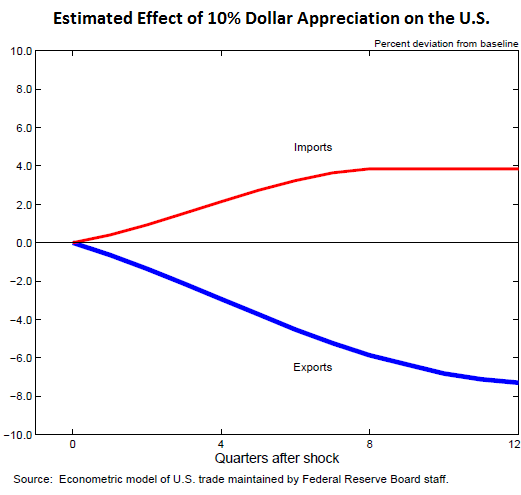 The net effect on GDP: a decline of 0.7% after one year and 1.5% after three years (these numbers are rough estimates). His chart shows the negative impact on GDP over time: 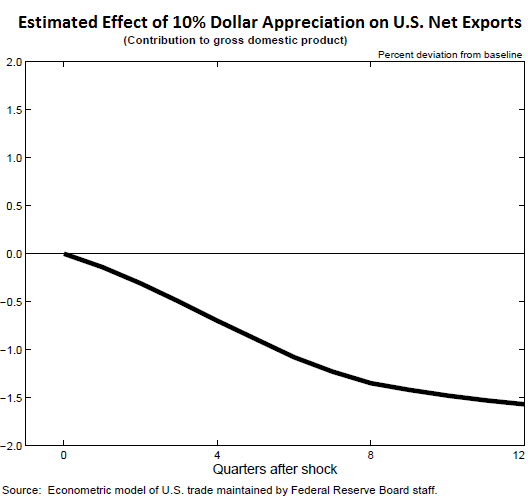 “{since} the dollar’s actual appreciation has been about 15%, the model estimates suggest that the cumulative reduction in U.S. aggregate demand from {this} is likely to total almost 2-1/2% of GDP after three years — in the absence of policy action to boost private demand or government spending. …

[T]he drag from net exports over the past year appears to be relatively close to the estimated effect implied by the staff’s econometric trade model, with net exports reducing GDP by almost 0.75% in the data, compared with an estimated fall of 1% in the model.”

A hit to GDP of 2.5% from the rising dollar is usually bad news, but not enough to cause a recession. But it would do so in this recovery, during which real GDP growth has grown only at roughly 2.2%/year.

The hit to trade from a rising dollar should hit manufacturing first – slowly, as Fisher explains. We already see the result on industrial production, unfortunately starting just as GDP growth peaked in Q2 of 2014 at 4.6% — dashing the most recent bout of take-off euphoria.

By last month the year-over-year rate of change for Industrial Production had dropped to near zero. That’s a clear warning, seen in all 8 recessions from 1960 (with 3 false alarms). 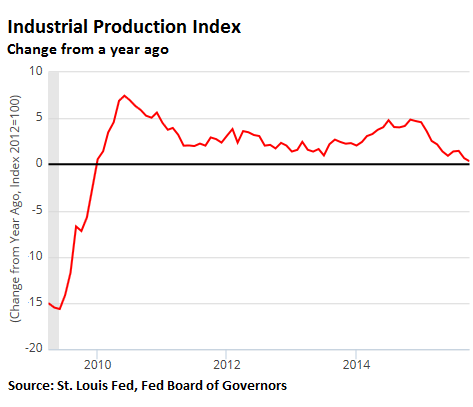 Other signs of manufacturing weakness were also reported on WOLF STREET on Nov 3 and November 15. Real GDP in Q2 was only 1.5%, so another percentage point or so of slowing from trade could take us close to the brink of a recession.

Bad news about the good news

Why has trade become so significant? It has never been considered a big swing factor in America. The answer is important: trade has been an American success story for five decades, up 250% since 1970 (before slowing as the dollar rose). But this makes the US economy more affected by both swings in the dollar and the global economy.

This chart shows the contribution of exports to GDP. Note the decline during the Financial Crisis, caused by the collapse of global trade; and the current decline, ascribed to various factors, most notably the toxic combination of lackluster global demand and a “strong dollar”: 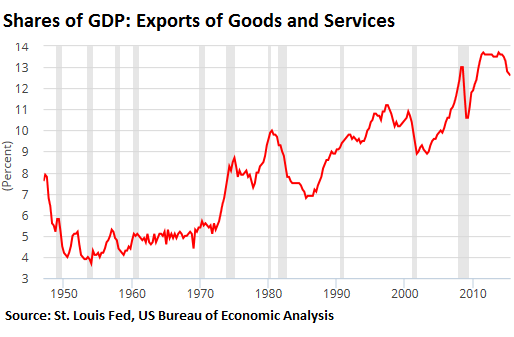 Despite the long (but slow) recovery, many parts of the economy remain quite weak. That’s among the reasons why the Fed has done two additional rounds of quantitative easing after the recovery had already started, without waiting for a downturn.

Watch for the weakness to spread from manufacturing (and mining & energy) to other sectors. Retail sales are already slowing. Likely next candidates to be affected are the purchasing manager surveys (PMIs) for service companies, new claims for unemployment, and growth in commercial and industrial loans.

The US economy is in the equivalent of what pilots call the “coffin corner”: can’t accelerate (despite economists’ hopes) and near stall speed (the minimum speed to avoid falling into a recession).

One more strong shock and the US will be in recession before the ink dries on economists’ latest optimistic reports. Spreading war from the Middle East, a shockwave hitting from China or Europe, a loss of “animal spirits” by Chief Financial Officers or bank lending officers in America, or any one of a dozen other things — there is a long list of candidates.

Just as Monty Python reminds us that “nobody expects the Spanish Inquisition,” economists never expect recessions, at least not in the surveys showing their consensus view. Stay alert. Stay cautious. By Larry Kummer, Editor of the Fabius Maximus website.

And so the US is on recession watch. Read… Now Flying Below “Stall Speed”