When IBM announced earnings last week, it talked about all the great things it was accomplishing to compensate for the fact that revenues had plunged 14% from a year ago to $19.28 billion, and that even “revenues from continuing operations,” after accounting for operations it had shed, dropped 1%. It was the 14th quarterly revenue decline in a row. Three-and-a-half years!

It’s not the only American tech company with declining revenues. There are a whole slew of them, mired in the great American revenue recession, including Microsoft, whose revenues plunged 12%. So they – big tech – are in this together.

But turns out, IBM’s revenues, as bad as they have been, might have been subject a little more financial engineering than normally allowed.

Today, IBM disclosed that the Securities and Exchange Commission is investigating how it has accounted for these lousy revenues. The one-sentence disclosure was tucked away in a footnote on page 45 of its SEC Form 10-Q, which it filed today:

In August 2015, IBM learned that the SEC is conducting an investigation relating to revenue recognition with respect to the accounting treatment of certain transactions in the U.S., U.K. and Ireland. The company is cooperating with the SEC in this matter.

“A company spokesperson wasn’t immediately available to elaborate on the probe,” according to the Wall Street Journal. 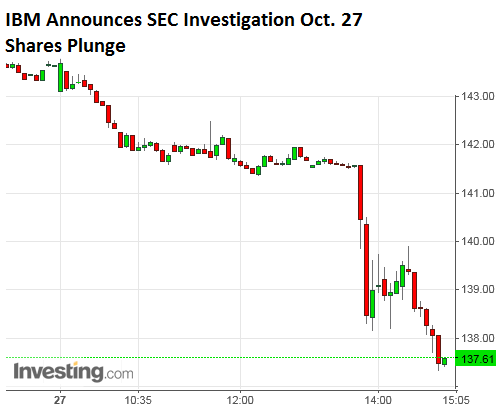 Timing was impeccable: IBM had “learned” about this debacle in August. In order not to unduly disturb its already frazzled shareholders – August was a rough month for stocks – it mercifully kept quiet about it.

So today, mere hours before the disclosure, IBM announced a $4-billion stock buyback program, which brought the total current authorization to $6.4 billion, in order to put a floor under its shares in advance of the announcement.

Shareholders should be furious that IBM would blow another $4 billion on a scheme that over the past few years has done nothing but drive IBM deeper into the mire and enrich Wall Street entities that handle the process and extract their fees. Shares have now hit their worst level since late 2010 – despite the incessant share buybacks: 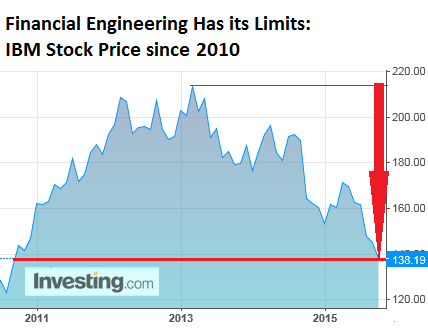 Instead of blowing tens of billions of dollars on stock buybacks to engineer its financial reports and pull, in cahoots with Wall Street analysts, a bag over investors’ heads with its per-share metrics, IBM should have invested those funds in actual engineering and in people, which might have helped it become great again. But this is unlikely to ever happen, given that Wall Street dominates the show.

“It’s been a rotten year for distressed and defaulted loan paper.” That’s how S&P Capital IQ LCD starts out its report on leveraged loans. “Rotten” may be a euphemism, as “fear has become a strong undercurrent.” Read… And Now Defaulted “Leveraged Loans” Go Kaboom