Things are not looking good for the euro. Out of its 16 years of existence, the euro has spent seven years in crisis. Rather than serving as the EU’s springboard to global dominance, as had been planned, the euro could well be its ultimate undoing.

The European single currency’s share of global transactions has dramatically shrunk in the last two years, from 40% in January, 2013, to 27% today. Europe’s share of global earnings has halved from just over 40% in 2009 to just over 20% today. It’s hardly what you’d call a success story.

There seems to be no agreement among Europe’s major power brokers about how to put the project back on track. If recent statements out of London, Frankfurt, Paris and Berlin are any indication, there is a growing resignation that Europe’s unification may have reached its outer limits. At least for now.

The first murmurings of disquiet came from the Frankfurt-based ECB, which just released some data on the biggest winners and biggest losers of the debt crisis and the ECB’s monetary policies, such as its negative deposit rates, QE, and all the other schemes it has used over the years to create that special wealth effect that would get the Eurozone economy moving.

The results are hardly a surprise: the biggest losers are Ireland, Greece and Spain and the biggest winners the Netherlands, Belgium, and Germany.

Between 2009 and 2013, Ireland lost more than €18,000 per capita while Spain saw its average wealth shrink by €13,000 per person – as a result not only of their respective rescue programs but also the burst of their spectacular real estate bubbles. The Greeks, meanwhile, saw their national wealth contract by €17,000 per capita.

By contrast, in the Netherlands, Belgium, and Germany, wealth grew during the same period by €33,000, €24,000, and €19,000 per capita respectively, due in large part to the massive influx of the ECB’s flood of liquidity and of financial investments, mainly from the euro’s loser nations. 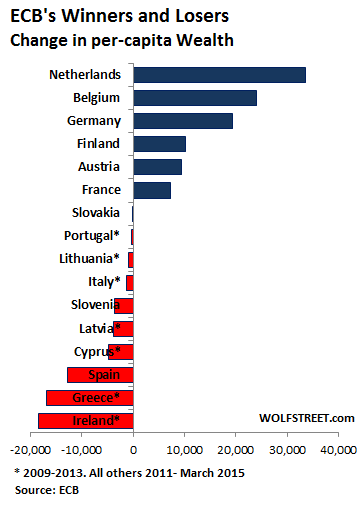 As its monetary policies spread over the Eurozone, the ECB is powerless to reduce these gaping disparities that its own policies helped create, it said. Its economic stimulus plan, if you can call it that, distributed funds among Eurozone nations based purely on their relative size, without taking into account the particular economic needs of each one.

The Limits of Unity

To correct the imbalances between stronger and weaker economies, a centrally coordinated system of financial transfers is needed that allows money to flow from the currency bloc’s richer nations to poorer ones. That’s the report’s convenient conclusion.

It’s the same old tired dream of full-blown fiscal union, or what Germans deride a “transfer union,” which Germany continues to oppose, especially given the seeming reluctance of many of the Eurozone’s “loser” nations to embrace a never-ending cycle of labor reforms, shrinking wages, and internal devaluations.

Even amongst Europe’s ranks of senior technocrats, doubts are beginning to emerge.

“Fiscal union is not a panacea,” Olivier Blanchard, the former chief economist of the IMF, told The Telegraph. “It should be done, but we should not think that once it is done, the euro will work perfectly, and things will be forever fine.”

Quite the contrary: Any mechanism to transfer funds from strong to weak nations – which has been fiercely resisted by Germany – would merely mask the fundamental competitiveness problems that will always plague struggling member states, he said.

Without the power to devalue their currencies, peripheral economies would forever be doomed to endure “tough adjustment” such as slashing their wages, to keep up with stronger member states, Blanchard said. This is exactly what has happened in Spain, which many economists and eurocrats have hailed as a poster child for Brussels’ austerity diktats. Mr Blanchard, like myself, is not buying the hype:

When people talk about the Spanish miracle, I react. When you have 23% unemployment and 3% growth, I don’t call this a miracle yet.

A few months ago Emmanuel Macron, France’s Minister of the Economy, and Sigmar Gabriel, the German Vice-Chancellor, unveiled an audacious master plan to achieve greater fiscal and social harmonization in the Eurozone.

“A new, staged process of convergence is needed,” the authors wrote. This would involve not only structural reforms (labor, business and the environment) and institutional reforms (functioning of economic governance) but also social and tax convergence – all in the name of addressing the “critical flaws in the architecture of monetary union.”

Now, just a few months later, the plan has already been shelved. With Germany once again digging in its heels, the chances of Europe agreeing on a fiscal pact – even a significantly diluted one – appear to be fading. Even the banking union – completed last year to great public fanfare, including pitched street battles and burning vehicles – remains half-baked, much to the ire of Western central bankers.

At last week’s EU Summit, Berlin made clear it would veto any proposals for a joint insurance of bank deposits, without which the banking union is destined to remain an empty shell. According to the FT’s Walter Machau, the German position is unrelenting, with the result that the Eurozone is once again back in limbo:

It is time to grow used to the thought that neither the Eurozone crisis, nor any other crisis for that matter, will bring about lasting institutional change. For sure, it brings about reports like the one written by the presidents of five EU institutions. They contain a few worthy discussion points. But the original design of a monetary union without a joint fiscal capacity is going to persist. The Eurozone is, and will remain, a modern gold-standard type, fixed-exchange rate system.

This effectively means the deep-seated imbalances that have consigned countries like Ireland, Greece and Spain to the scrap heap of economic development while boosting the competitiveness of Europe’s richest economies are here to stay for the foreseeable future.

The good news? Given that the main alternative – besides scrapping the euro project altogether – is granting an unprecedented amount of power over the lives of half a billion people to institutions that have virtually zero democratic legitimacy and accountability and that have done nothing to earn the public’s trust, perhaps muddling along is the least bad, really bad option on offer. By Don Quijones, Raging Bull-Shit.

So here comes ECB Executive Board Member and Chief Economist Peter Praet with devastating charts to show how the euro has failed the Eurozone economy. Chilling, from the horse’s mouth. Read… ECB Chief Economist: OK, I Get it, the Euro Doesn’t Work