When negotiators from 12 nations and hundreds of lobbyists from around the world, after years of horse-trading, agreed on a “trade deal” on Monday – a deal that remains secret except for the sections that have been leaked – President Obama gushed that it “reflects America’s values.”

The Trans-Pacific Partnership (TPP) pries open markets for American goods and services and impose rules on our trading partners that give “our workers the fair shot at success they deserve,” he said.

Similar praise ricocheted around the Pacific from Prime Minister Stephen Harper in Canada, and from politicians and heads of state in Australia, New Zealand, Japan, and the other participating countries. China isn’t part of the deal, but what the heck.

The free trade deal isn’t actually about “free trade.” Many provisions that have been leaked deal with reshuffling the power structure between corporations and democratic states at the expense of citizens and taxpayers.

So now this thing has to be ratified in the 12 countries involved. There might be one or the other hiccup – for example, Hillary Clinton has just come out against it to gain points in her battle to the presidency. “As of today, I am not in favor of what I have learned about it,” she told PBS, thus flip-flopping beautifully from when she, as Secretary of State, had backed the deal.

Despite these potential hiccups, delays, flip-flops, and re-flip-flops, I expect it to get ratified eventually by all 12 countries. Too many deep pockets have lined up behind it to let some elected politician screw it up.

Alas, there remains a little problem: does it really promote exports, which is what they all claim it does, or is that just hype?

That’s the question Krishen Rangasamy, Senior Economist at Economics and Strategy, National Bank Financial, in Canada asked in a note – and then provided the answer: um, no.

He used trade data for countries with which Canada has free trade agreements to see if Canada was exporting more to them after trade agreements had been signed. It found that there would be, of course, “winners and losers” in Canada, but “there’s no guarantee net benefits will be positive.”

Previously protected industries will be under siege from foreign imports, while our exporters will only be able to take advantage of the TPP’s lower tariffs if they are offering better value than the competition.

But he hasn’t seen the actual TPP text either, which remains secret. And if he has seen it, he’d get in big trouble disclosing its contents. Instead, he is looking at actual trade data – the aftermath of prior trade agreements, including NAFTA.

And here is what he found:

[B]enefits from a trade deal become apparent when the currency weakens, i.e. the share of exports going to countries with which Canada has a trade deal tends to rise when the C$ depreciates. And as the 2003-2011 period illustrates, the opposite is true when the loonie appreciates.

This is his chart with data through Q2 2015 that shows this relationship between the loonie (dotted red line, right scale) and the share of Canadian exports to “free trade” partners (blue line, left scale): 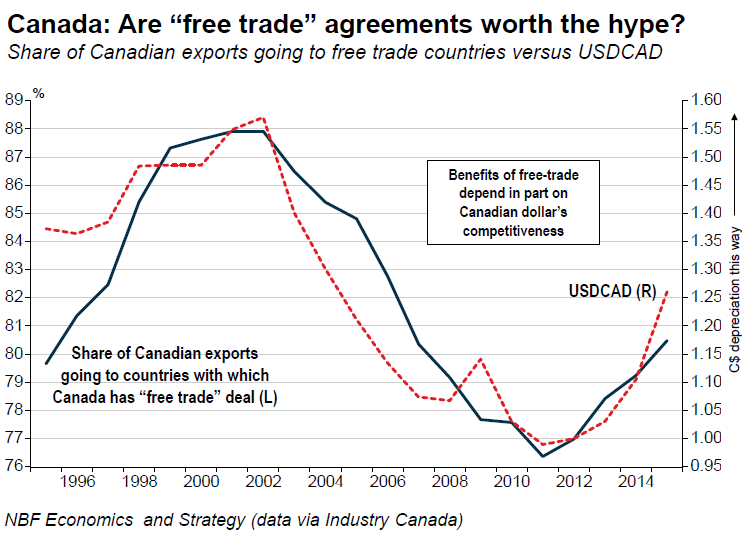 So exports to those countries increased as a portion of total exports only when the Canadian dollar was devalued against these other currencies. And the share of those exports fell when it gained in value.

Total exports to all countries are also expected to move this way with the currency – but the trick here is that the proportion of trade-agreement exports moves within that total, thus multiplying the impact of currency fluctuations on exports.

To get any export benefits from the free trade agreement at all, the currency has to be devalued against the currencies of partners in these deals. And that would be a redoubling of the incentive to escalate and win the currency war by devaluing one’s own currency faster and more steeply than other countries are devaluing their currencies.

But these trade partners are looking at the same charts, and they see the same redoubled incentives to devaluing their currencies faster and more steeply to benefit from the trade deal on their end. Thus, the race to the bottom is built into these trade deals.

And if, by a miracle, currencies remain largely stable to each other, the promised uptick in exports – the benefit Obama has offered American workers – will be exposed as plain hype designed to cover up whatever the real purposes of these deals may be.

Left out of the deal, China isn’t sitting still, as the yuan gains “staggering momentum as major currency,” according to SWIFT. And it comes out of the hide of other currencies. Read… Not the “Death of the Dollar” but “Death of the Euro?”