These are the propitious words with which the Chicago Business Barometer by MNI Indicators started out this morning. And it wasn’t the first of the regional manufacturing reports to have conniptions about the sudden deterioration in manufacturing.

The drop in the Barometer to below 50 was its fifth time in contraction this year and comes amid downgrades to global economic growth and intense volatility in financial markets which have slowed activity in some industries.

Respondents blamed, as the report said, “China’s economic woes” (about 30%) and problems in Europe (20%). Of the five components, only Employment rose. Supplier Deliveries was unchanged. As for the rest, it was morose:

Production led the decline with a sharp double-digit drop that placed it at the lowest since July 2009. New Orders also fell significantly and both key activity measures are running well below their historical averages.

Order Backlogs remained in contraction for the eighth month in a row. The oil price plunge pushed the Prices Paid index to “the lowest since July 2009.”

So “the scale of the downturn in September following the recent global financial fallout is concerning.” The report fretted about the “disinflationary pressures” and output that was “down very sharply.” And it concluded: “We await the October data to better judge whether this was a knee jerk reaction and there is a bounceback, or whether it represents a more fundamental slowdown.”

Two weeks ago, the Empire State Manufacturing Survey had already warned about September, after a nasty August, with its current conditions index for the second month in a row at the worst level since 2009. 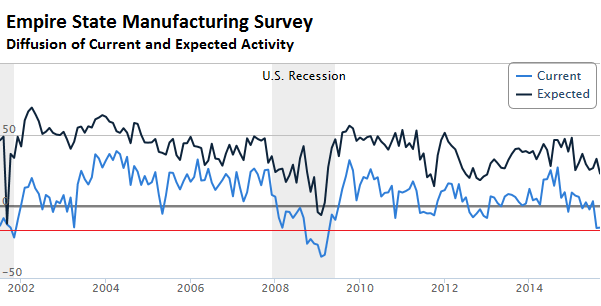 On September 17, it was the Philadelphia Fed Manufacturing Business Outlook Survey that rained on the parade, with manufacturing conditions that were, as the report said, “mixed.” While some indicators in the survey – new orders, shipment, and employment – remained in positive territory, its broadest measure, the diffusion index of current activity, plunged from 8.3 last month to -6.0 in September.

It was the first time since polar-vortex-February 2014 the index was negative. “Evidence suggests” that some of the responses regarding general activity “may have been negatively affected by the volatility in the stock market and international news reports.” 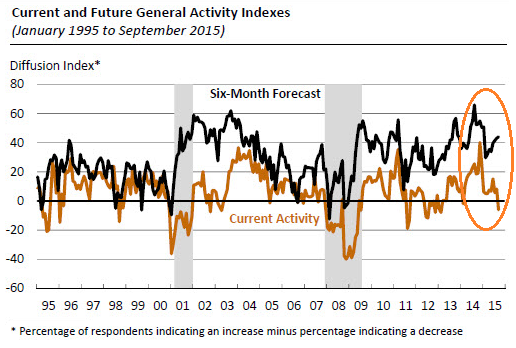 On September 24, the Kansas City Fed offered up its view on the debacle spreading across the western third of Missouri; all of Kansas, Colorado, Nebraska, Oklahoma, and Wyoming; and the northern half of New Mexico. On a month-to-month basis, the Manufacturing Survey’s composite index (average of the production, new orders, employment, supplier delivery time, and raw materials inventory indexes) looked like this: 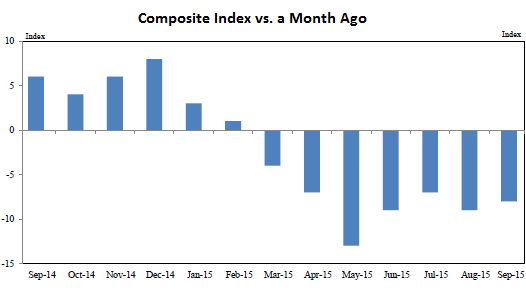 “It feels like someone just flipped the switch to ‘off’ without any concrete reasoning,” one of the executives commented.

Exporters blamed the strong dollar: “The strength of the US dollar has hurt. Our business is down more than 50% from two years ago.” Importers (“cement from China”) praised the strong dollar. And there was this revelation: “We have seen increased weakness in international business.”

On September 28, the Dallas Fed dished up the Texas Manufacturing Outlook Survey. After a really bad summer, the production index refused to improve, “suggesting output held steady for a second month in a row after several months of declines.” Other indices rose from bad to less bad:

Perceptions of broader business conditions remained weak in September. The general business activity index, which has been negative all year, rose 6 points to -9.5. The company outlook index plunged to -10.3 in August but recovered somewhat this month, climbing to -5.2.

The labor market deteriorated further. Employment is for the fifth month in a row in contraction (12% of firms reported net hiring, 18% reported net layoffs). And the hours worked index plunged from flat to -11.1.

Comments variously blamed the oil bust, the strong dollar, and financial markets. Among the gems:

“We are doing layoffs for the first time in decades. The market is very ugly, and the U.S. dollar has made us very uncompetitive with foreign suppliers.” – Executive in Fabricated Metal Manufacturing.

This is the suddenly darkening picture of US manufacturing, sprinkled with eerie comparisons to nightmare-year 2009 and references to financial markets around the world. It’s no longer just oil. It’s the crash in China, the bear market in Germany, the drop in global stocks. “Volatility” in the stock markets is cropping up.

And there’s the Philadelphia Fed’s precious reference to “international news reports.” If these manufacturing executives would just stop checking their smartphones, for crying out loud!

Manufacturing accounts for 12% of US GDP and employs about 9% of the US workforce. So when manufacturing gets in trouble in the US, it isn’t necessarily the end of the world; because you can always make it up with fast food.

Junk bonds just suffered their worst sell-off since October 2011. It was linked to worries about the global economy and the commodities rout. And it’s turning into a vicious circle for stocks. Read… Next Shoe to Drop on Stocks? Junk-Bond Meltdown Hits M&A

12 comments for “US Manufacturing Recession Draws Eerie References to 2009”