“Let me assure you, if the revenue environment weakens or interest-rate structures don’t move up and the economy slows down, we’ll have to take out more costs,” Bank of America CEO Brian Moynihan said on Thursday at the Barclays Global Financial Services Conference. And that would mean more job cuts.

BofA is famous for whittling down its headcount in recent years. In Moynihan’s 25-slide presentation, there was this chart that shows just how skillfully he has trimmed down his workforce, chopping it by 25% overall since the second quarter of 2011: 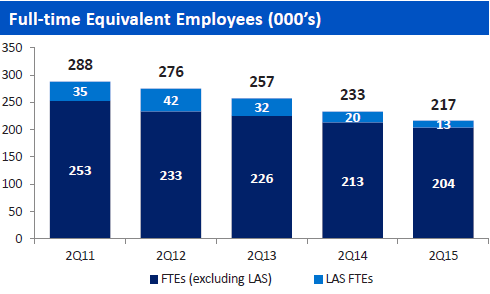 Not get them axed from banking jobs.

Banks try to make money in a myriad newfangled ways. But the classic way is on the spread between the interest they pay on deposits and the interest they charge on loans. A wide spread fattens their profits. But these spreads have become paper-thin.

Banks can get all the money they need from the Fed at near-zero cost. They don’t need depositors, and there is no competition for depositors. So, in one of the biggest scams in history, depositors get next to nothing from banks around the country. And the banks’ cost of money is near zero.

But there is desperate competition for making loans in an environment when bankers and their customers, especially big corporate customers, wade up to their nostrils in Fed-engineered liquidity. This mad frenzy pushes down lending rates (along with bond yields). And the banks’ spreads and profit margins have been squeezed.

The entire world has its eyes riveted on the Fed. There are days, like today, when nothing seems to matter other than what the Fed is going to do.

But the Fed once again couldn’t figure out what to do. It certainly didn’t want to ruffle the markets by doing anything in particular, such as raising rates from nearly nothing to almost nothing because it might somehow derail this economy of ours, or worse, that of the entire world.

So it did nothing. Now, no one can figure out under what conditions the emergency that led to this extreme monetary policy in 2008 might be deemed over, or whether it will be reclassified as a permanent condition, rather than an emergency, and remain in place until something Really Big breaks that will make the prior emergency seem banal.

Uncertainty – and frustrated bankers – is the result.

Now bankers are losing patience with the Fed. And they were firing back today while at the Barclays Conference.

US Bancorp CEO Richard Davis already lost patience; his bank would cut expenses – at a bank, that means jobs. Focusing on costs would allow him to “care less” about interest rates rise and whether they’d finally rise or not, he said according to the Wall Street Journal. And the shares of his bank dropped 2.4% following the Fed’s announcement.

“It would be a good thing to raise rates,” explained JP Morgan CEO James Dimon, as JPM dropped 3% from the hopeful moments just before the announcement. “It would be a good sign,” he said but didn’t expect his wishes to come true.

“I dream about it every night,” is what BB&T Corp. CEO Kelly King said about rate increases. His bank’s shares dropped 3.1% from the moments when hope still reigned.

A wider interest rate spread would come in handy because not all is well in banking land. Yesterday, Citigroup CFO John Gerspach, warned that trading revenue could fall 5% in the current quarter.

Moynihan’s slide deck shows that investment banking fees at BofA in Q2 2015 were lower than in both Q2 2014 and 2013. Sales and trading revenues were also lower in Q2 this year than in both prior years. Moynihan said that revenue from trading bonds, currencies, and commodities would be down this quarter as well.

Meanwhile, according to the presentation, BofA’s global average loan losses are rising. That’s not a good combination.

The financial sector plays an outsized role in the US economy, and if it sneezes, the Fed gets even colder feet. But the medication for banks – higher rates – may not be available, or not in sufficient measure, in this perverted economy that the Fed has so skillfully engineered over the past seven years.

But Wall Street engineering does perform miracles, even though investors in such miracles are now getting their hands burned off. Read… A Spinoff Goes to Heck, after Just 10 Months