The Bank of Canada has been fretting about the ballooning debt of Canadian households. Last year, it repeatedly called it a risk to “financial stability,” perhaps in preparation for raising its benchmark interest rate. Then Canada’s economy tanked.

In July, when the freaked-out Bank of Canada cut its benchmark rate for the second time this year, it admitted that the rate cut comes at the price of “financial stability risks” which “remain elevated.” Governor Stephen Poloz added: “Of particular note are the vulnerabilities associated with household debt and rising housing prices.”

These rate cuts didn’t do much to support Canada’s resource economy that has been spiraling down in the wake of the commodities rout. But they made up for it by inflating the housing bubble even further.

The Teranet–National Bank house price index, released September 14, hit new records every month this year. In August, it was up 5.4% year-over-year. Note how the index has soared since the peak of the prior housing bubble that ended with the Financial Crisis: 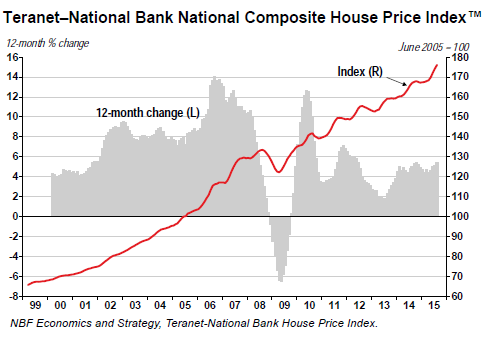 Yet disposable incomes only inched up 0.8% in the second quarter, Statistics Canada reported on September 11. So the household-debt-to-disposable-income ratio, a measure of household leverage, hit a record 164.6%, the largest jump in the ratio since 2011: 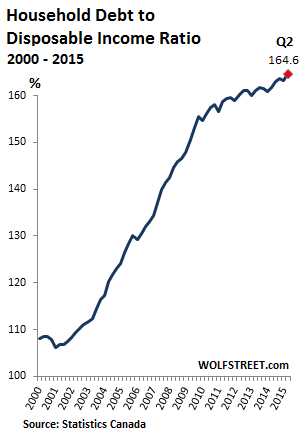 “Fortunately, there’s little need to fret about households’ ability to carry all that debt,” BMO Capital Markets senior economist Benjamin Reitzes wrote in a note. Interest rates are super-low, and thus the burden of carrying all this debt still manageable. But even he conceded that “further increases would start to ramp up our level of concern.”

The ratio is an average. There are many Canadian households with little or no debt. But then there are many other households whose incomes have not fared well, and who have piled on debt to buy a modest home in one of the most overpriced housing markets in the world.

Consumers are beginning to stretch.

But no problem. Despite increased debt loads, the 90-day-plus delinquency rate is down 1.6% and bankruptcies are down 9.4%, Equifax reported, as they should be, given the increasingly easy and cheap credit sloshing through the land: borrowers aren’t going to fall behind if they keep getting new money. It’s when they can’t get anymore new money….

But suddenly there are problems: rising delinquencies in “some of the sub-segments” of the population, the report warned.

We’re starting to see the impact of low oil prices in the West as these prices are forcing a new reality on Alberta and Saskatchewan in particular. In these two provinces the debt levels are stable, but the delinquency rate has started to increase.

On a demographic basis, the 90+ day delinquency rate for Canadians aged 65+ rose for the first time since 2010. The rate increased by 2.4% this quarter versus a decrease of 5.1% in the previous quarter.

So the oil patch is experiencing rising delinquencies. And across Canada, for the first time since the Financial Crisis: seniors!

Equifax promised to “monitor this trend closely in the coming quarters.”

This ballooning household debt “puts Canadian consumers in a precarious situation,” Scott Hannah, CEO of the non-profit Credit Counselling Society, told the Toronto Star. “If they’re struggling to manage their increasing debt obligations now, a sudden change in external factors — like a rise in interest rates or the loss of a job — will leave many Canadians in greater financial difficulty.”

It’s for a reason that the Bank of Canada called this enormous amount of household debt a “financial stability risk.” The fact that delinquencies have started to rise in the first subsectors – despite historically low interest rates and super-easy money – is the audible ticking of a time bomb under one of the most overpriced housing markets in the world.

Spiking numbers of “half-empty” office buildings? “Canada is also in the midst of an ill-timed supply surge that caused vacancy rates to rise, warns a new report. It paints a picture of an epic office boom turned into an epic office glut. Read… What’s Coming Unglued Now in Canada?