The Dow Jones Transportation index has been warning us: by August 25, it was down 19% year-to-date before bouncing. It’s now off 13%. Not all is well in the transportation sector – and by extension in the global economy.

The World Trade Monitor, when I last wrote about it on July 22, painted a very un-rosy picture of global trade by having dropped the most since the Financial Crisis.

In granular detail, the weekly China Containerized Freight Index (CCFI) fell to 820.91 on Friday, hobbling along near its multiyear low set in June. It tracks contractual rates and spot rates for shipping containers from major Chinese ports to major ports around the world. It’s 22% below where it was in February and 18% below where it had been in 1998, when it was set at 1,000!

Spot rates from Shanghai to the US West Coast per 40-foot container equivalent unit (FEU) are down 33.4% from a year ago, according to the Shanghai Containerized Freight Index (SCFI); spot rates from Shanghai to the US East Coast are down 41%.The Drewry Container Freight spot rate from Hong Kong to Los Angeles is down 38%. That’s the east-bound trade, where rates had been collapsing all year.

Westbound rates had been holding up. For example, rates from Rotterdam to Shanghai, which tracks the cost of shipping exports from Europe to China, as measured by the weekly World Container Index (WCI), had been hanging in there all year, even if at relatively low levels ranging from $750 to $870 per FEU, according to JOC’s market data. But after August 20, when it still stood at $869 per FEU, it started plunging. By September 10, it hit $611, down 30% in three weeks.

The beaten-down shipping rates are the result of an oversupply of container ships and weak global demand for manufactured goods.

Global air freight has also gotten hit, with traffic down 0.7% in July from a year ago, according to the International Air Transport Association, even as air cargo capacity jumped 6.7%.

“The disappointing July freight performance is symptomatic of a broader slowdown in economic growth,” IATA Director General Tony Tyler pointed out in the report. And the consequences are beginning to cascade through the industry: The Wall Street Journal reported that Nippon Cargo Airlines, Japan’s biggest cargo carrier, canceled an order for four 747-8F freighters from Boeing.

So trade is not exactly the picture of a thriving global economy. Conditions, instead of getting better, are getting worse.

The underlying theme: yes, global trade is in trouble and the global economy is getting mired down, and yes, neither QE nor ZIRP can do anything about it because they’ve been deployed all along for years, and this is happening despite or because of them … but at least the US economy is picking up speed, it is the cleanest dirty shirt out there. And US GDP growth for the second quarter confirmed that. That’s been the underlying theme.

But now the Cass Freight Index for North American is raining on this theme.

In August, according to the index, the number of shipments dropped 1.2%, after having already dropped 1.6% in July. It’s down 4.6% from August last year. It about matched August 2013, and both were the lowest Augusts since 2010. With the exception of January and February, the index has been lower year-over-year every month. In the spring and perhaps even early summer, we might have thought that this was statistical noise or a longer-lasting blip, but now it has become a morose pattern of year-over-year shipping volume declines: 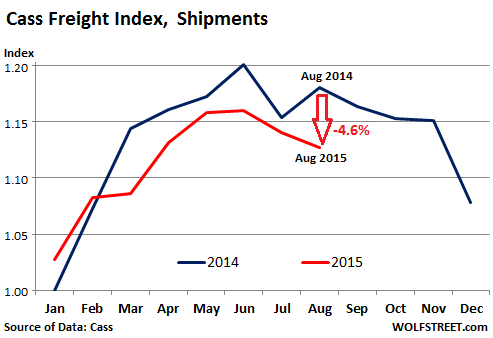 The Cass report explained the August debacle this way:

Generally, retailers are stocking up for fall sales, but high inventories and a rising inventory to sales ratio slowed ordering earlier this year. Inventory levels – for retail, wholesale and manufacturing – are well above the high point prior to the inventory drawdown at the beginning of the Great Recession.

Inventories have been climbing during a period of low inventory carrying costs. Interest rates have been the lowest in recent history, warehouse space was abundant and lease rates low, and taxes and insurance costs were flat.

Sooner or later, businesses will try to whittle down their inventories, either by selling more or by cutting orders – and the first just isn’t happening to the extent needed.

In terms of shipping expenditures, the index dropped 2.0% in August, after a 4.5% drop in July, on a combination of lower volume and lower rates. A drop in shipping expenditures in August is not uncommon, but year-over-year, the index is down 8%. It was the worst August since 2012. The index has been significantly below last year for the past six month, and the trend is getting worse: 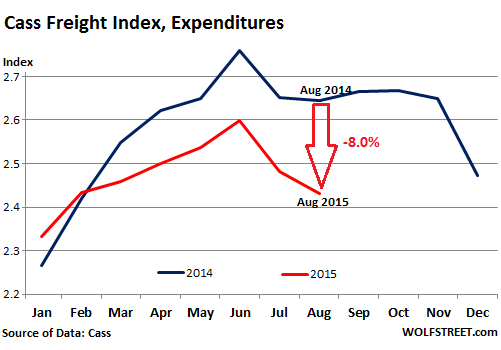 Cass lamented that the drop in freight spending in August was “sharper than expected” as truck spot prices dropped “due to abundant capacity.”

It remained optimistic, however: “Despite many headwinds, the transportation sector continues to grow and prosper, largely because consumers are back in the marketplace. The Conference Board’s Consumer Confidence Index leapt up in August, rising 11.5%.”

Alas, as the electronic ink was drying on the Cass report Friday morning, the University of Michigan Consumer Sentiment index was released. And it dropped 6.2 points to 85.7, the lowest level since September last year, far below forecast, and the largest drop since September 2013. This trend in consumer confidence has already shown up in other measures as well [read… Market Rout Hammers Economic Confidence of Americans ].

The swoon knocks the foundation out from under the theory that higher consumer confidence would finally drive Americans to splurge and generate more orders and more shipping volume. That hope has been out there, and companies counted on it, but it just isn’t happening.

The global economy, according to Investment Bank Natixis, is headed into the kind of trouble where monetary policies will be “ineffective.” Read… Global Economy Nearing a “Structural Recession”

18 comments for “Freight Goes to Heck, Now Even in the US”