An extremely high-stakes game of political poker, not just for Catalonia and Spain but for Europe.

For a nation that doesn’t officially exist, Catalonia sure knows how to throw a national-day party. September 11, approximately 1.4 million people filled the streets of the region’s capital, Barcelona (urban population: 1.6 million), to commemorate La Diada, the fateful day 301 years ago when Catalonia was defeated during the War of the Spanish Succession.

This year’s event was widely praised, even among some unionists, for its near flawless organization, and once again the atmosphere was one of peaceful joviality, resolute defiance and collective hope.

Here are some photos I took in the evening after the march, at an event held in our neighborhood. In the first one, you can see a Castellers (human tower): 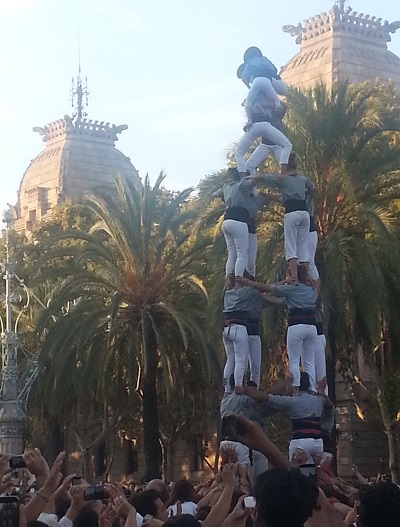 In the second one you can see the “Arc de Triomf” in the background, with a massive independence flag swaying in the breeze: 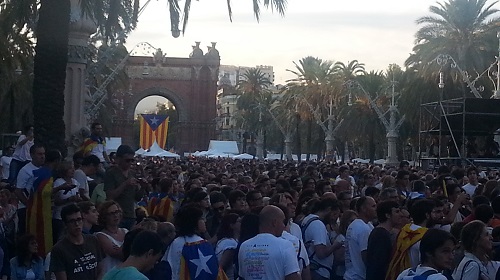 But now the festivities are over, and the really hard work of nation building begins. Hope, catchy slogans, and huge demonstrations alone are not enough to create a new nation.

A nation needs a viable economy, which Catalonia already has; it needs international acceptance and recognition, which could be a much higher mountain to climb, especially given the threat posed by separatist movements in other European countries (France, Italy, the UK, Belgium); and it needs the basic organs and institutions of state. According to Catalonia’s premier, Artur Mas, these are now under development.

“One crucial task for the next government will be to create the state structures that will succeed those of the Spanish state: the tax authority, for example, which we have already worked on for the past year and a half, or social security or the central bank,” he told the Financial Times.

In other words, it seems that Catalonia’s pro-independence coalition is now moving inexorably from the realm of fanciful words to the realm of determined action. Mas and his colleagues believe that for Catalonia to be a sovereign nation state, it needs its own central bank – which is probably true – but preferably one affiliated with the European Central Bank (ECB).

This is perhaps the ultimate paradox: Catalan separatists want to split from Madrid in the name of self-determination but most of them want to remain part of both the EU and the Eurozone, despite the obvious sacrifice this would require in terms of economic and political sovereignty. [As an aside, it’s worth noting that Mas’s party is also strongly in favor of the Transatlantic Trade and Investment Partnership (TTIP) which, together with similar trade treaties like TPP and TiSA, poses arguably the biggest threat to national sovereignty in today’s world).

The EU may have other ideas, anyway. The chairman of the European Central Bank (ECB), Mario Draghi, has already roundly rejected a petition to turn the Catalan Institute of Finance into an ECB-affiliated central bank. And according to the governor of the Bank of Spain, Luis María Linde, if Catalonia were to declare independence, Catalan-based banks such as CaixaBank, Banco Sabadell and Catalunya Banc would face serious problems and could even go under:

Whether Linde is right only time can tell. After all, there is no historic precedence for what could be about to happen.

Even so, prophecies of doom and gloom no longer have the impact they may once have had on the collective mood or mind of Catalonia’s pro-independence movement. Nor for that matter do stern admonishments from European leaders like Angela Merkel or David Cameron that a newly independent Catalonia would not automatically qualify for EU membership, as many pro-independence politicians such as Mas constantly claim. In Catalonia, just as in Madrid, emotion and gut feeling, rather than logic or reason, is now firmly in the driving seat.

That’s why just about anything could happen in the coming weeks and months. If the common electoral list of pro-independence parties wins a majority of seats in this month’s regional elections – a likely outcome if recent polls are anything to go by – it has vowed to establish a government lasting no longer than 18 months to put in place the institutional frameworks needed to lead the region toward independence. That includes a Catalan military (affiliated with NATO, of course).

This would be Catalonia’s all-in moment in what is fast becoming an extremely high-stakes game of political poker – and not just for Catalonia and Spain but for the whole of Europe.

As the FT notes, the idea of building a state within the Spanish state is sure to infuriate Madrid, which has already threatened to reestablish centralized control of Spain’s north-eastern region as well as send in tanks and/or even charge pro-independence politicians with sedition (punishable with up to 15 years in prison) – hardly the sort of actions that are likely to diffuse an already explosive situation. By Don Quijones, Raging Bull-Shit.

5 comments for “Is Catalonia About to Go All In?”