And monetary policies will be “ineffective”

To the never-ending astonishment of our economists, global growth has been much weaker since the Financial Crisis than before it, despite enormous global stimulus from years of extreme central-bank monetary policies and record amounts of government deficit spending.

This should not have happened, according to our economists. Fiscal stimulus and expansionary monetary policies beget economic growth, which beget even more economic growth. That’s the theory. And that’s precisely what hasn’t happened. All it did was inflate asset prices. But the global economy has been a dud.

“If we calculated global growth with China’s true growth rate and not the official rate, global growth in the second quarter of 2015 would be only 2%,” figured Natixis, the investment bank of France’s second largest megabank, Groupe BPCE.

This “sluggish growth, close to a recession, is due to persistent, structural causes; we therefore use the term ‘structural recession’ to show that it does not have a cyclical origin,” the report explained. It’s not caused by normal cyclical fluctuations, but by “persistent structural problems that are specific to each region.”

Hence a decline in exports of those products, a weakening of investments, and a sharp weakening of what Natixis calls China’s “true growth.”

The main problem in Japan is “the excessive and virtually continuous distortion of income distribution at the expense of employees.” This shows up in the “frequent decline in real wages.”

OK, that sounds like an American disease as well, and it is….

Real per-capita wage growth in Japan has been negative year over year since 2013. From 1998 to 2012, there had been five significant periods with real wage declines. Yet per-capita productivity has continued to grow. And real GDP per working-age population has outgrown the rates in the US, the Eurozone, and the UK, as this chart from the Bank of International Settlements shows (blue line = Japan): 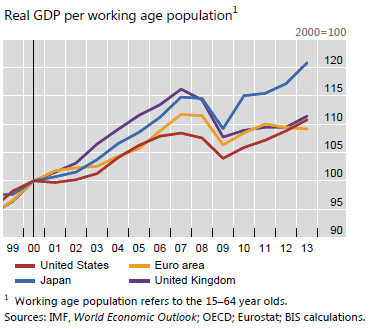 The Japanese are working hard and productively but are increasingly reduced to cheap labor by Japan Inc. The consequences of Abenomics, including a bout of inflation, have made this condition worse. If workers don’t make enough money, household demand is left twisting in the wind.

Household demand moved in fits and starts. But on April 1, 2014, the consumption tax hike hit, and household demand plunged. It’s now merely 9% above where it had been 1998.

Emerging countries other than China suffer from bottlenecks.

Growth, and in particular industrial growth, in these countries has been “slowing down markedly.” Growth in manufacturing production has trended down ever since the V-shaped post-Financial Crisis recovery and has recently dipped into the negative. This has pushed GDP growth down into the 3% range. But these should be the fastest growing economies!

The report blames “the many bottlenecks,” including a shortfall in sufficiently skilled workers, a shortage of energy production – with electricity production stagnating for the past 15 years – and sorely lacking transportation infrastructure.

The plunge to multi-year lows in the prices of oil, natural gas (LNG), copper, iron ore, tin, gold, silver, and so on have hit each commodity-exporting country in its own way. They include Saudi Arabia and other OPEC countries, a number of African countries, Russia, Australia, and Canada.

For commodity exporters as a group, GDP growth is now hovering at 2%, according to the report. But this might get worse: Russia is in a deep recession, Canada in a technical recession, and Australia looking increasingly shaky.

Government revenues in many of these countries are based in part on the value of commodity exports. And if some of these countries have to grapple with their fiscal deficits in the future by cutting back government spending, growth will take another hit.

The US gets tripped up by energy sector horrors.

The collapse in oil and gas prices has caused companies directly and indirectly in the industry to cut back. Thus a “downturn in productive investment and industrial production as a whole,” which has weakened the economy further, even as GDP growth has been in the already lousy 2% range ever since the “recovery” from the Financial Crisis.

But there is hope, the report found – the US being the only area where the report mentioned any signs of hope: “The second quarter figures nevertheless show that investment seems to be picking up.” OK, maybe just a glimmer.

Eurozone is mired in uncertainty and under-investment

The debt crisis has had consequences: falling investment “linked to excess indebtedness and uncertainty.”

While the Eurozone emerged from its long recession, growth has been anemic, with GDP inching up at around 1% over the past two years.

All these problems are structural, rather than cyclical, according to Natixis. They’re not part of the normal fluctuations that could be dealt with via stimulus programs or monetary policies. Natixis:

Expansionary monetary policies, although they are being used, are unable to pull the world out of this situation of structural recession.

Instead, these economies would have to attack their structural shortcomings. China would have to move up the value chain, which takes time and is painful. Japan would have to correct the “anomalies in income distribution” and pay workers more, which would make Japan Inc. less competitive and the elite less exuberant about Abenomics. Emerging countries other than China would need to invest money they don’t have in infrastructure and education. The Eurozone and other economies that are bogged down in too much debt would need to engage in “public and private sector deleveraging.”

That’s not happening. Instead, the reaction is “to use highly expansionary monetary policies to restore growth, which is ineffective, given the nature of the problems, and dangerous as it generates more excess liquidity.”

And this has not been seen since the Financial Crisis: read… The US Revenue Recession Spreads past Dollar, Energy