China’s crackdown on corruption, or at least the ostentatious display of the spoils of corruption, and its selective hunt for corrupt officials, which to some observers resembles a political purge, may or may not tamp down on actual corruption, which is what greases the wheels in the Chinese economy. But it’s certainly doing a number on Macau.

Macau is the only place in China where Chinese can legally gamble away their wealth without having to resort to the stock market or other schemes. It’s also a convenient place where they can circumvent China’s currency controls to siphon money out of China and send it to “safe havens,” such as over-priced homes in the most expensive trophy cities in the US near the peak of US Housing Bubble 2.

Until February 2014, Macau was on an awesome ride that had kicked off in 2001, when it permitted foreign casino operators to build gambling palaces. In 2002, Macau became the number one gambling destination in the world. Even during the Financial-Crisis, Macau’s gaming revenues rose nearly 10%. These endlessly soaring revenues were a thermometer into China’s economic boom.

So in its crackdown on corruption, China is hitting Macau in both departments: scaring high-rollers away and monkey-wrenching its capital-controls evasion machinery. And this year, Macau has taken a third blow: the deteriorating economy in mainland China.

As a result, Macau’s real GDP plunged 24.5% in the first quarter year-over-year and then went ahead and plunged an even more terrible 26.4% in the second quarter, to 77.5 billion Macau patacas ($9.7 billion), the lowest level since early 2011.

The Statistics and Census Service (DSEC) in its report today blamed “exports of gaming services,” as it calls gambling revenues that had plunged 40.5% year over year, and “exports of other tourism services,” which had plunged 21.5%. “Total exports of services” crashed by 35.9%.

For the first half, year-over-year, GDP was down 25.4%. And the report saw “no signs of improvement.”

But just because the economy totally blows up and collapses by over a quarter in a year doesn’t mean that there isn’t room for official, perhaps Beijing-mandated optimism:

And this is what Macau’s monthly gambling revenues, according to the Gaming Inspection and Coordination Bureau (DICJ), look like since 2010. From the peak in February 2014, when the new government in Beijing was getting its feet on the ground, through August 2015, Macau’s all-important lifeblood plummeted 51%: 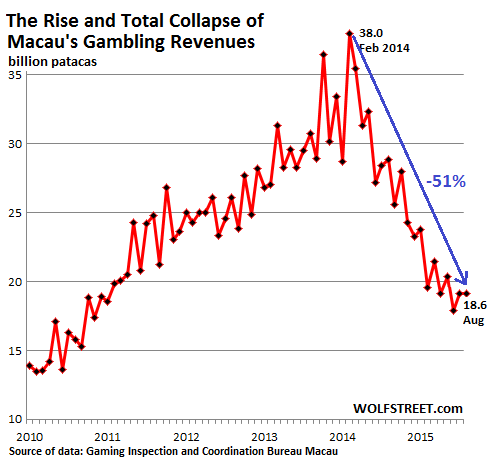 Yet, despite the plunge in the casino business, unemployment only ticked up 0.1% year-over-year to 1.8% – which makes Macau the envy of countries whose economies have collapsed in a similar depression-like manner, such as Greece. So the government is still increasing its spending:

Government final consumption expenditure expanded by 5.7% year-on-year. Compensation of employees increased by 4.4%, and net purchases of goods and services rose by 8.1%.

And inflation is ticking up, with the GDP deflator that measures price changes increasing 5.0% year-over-year.

And now Chief Executive Fernando Chui, who is backed by the central government and can’t easily vituperate against its ambitions to strangle Macau, said the previously unthinkable: If casino revenues continue to drop, he’d cut some government spending.

But this hasn’t discouraged casino operators. They’re trying all kinds of things, including building new and fancy gambling palaces and also resorts focused on activities beyond gambling to encourage more mainland Chinese, the regular folks this time, to show up and dispose of their money – on the time-honored principle: build it, and they will come.

But they aren’t coming. Bloomberg:

Package group tours from mainland China fell 19% in July from a year ago, even as the number of hotel rooms in the former Portuguese enclave increased 7.2%….

Casino operators and their investors are going to bear the brunt of the collapse of what was, once upon a time, an epic bubble – see chart above – but no one was allowed to call it a bubble though it defied description. Investors were incessantly told to believe that it would always continue to boom no matter what, there being 1.3 billion increasingly wealthy Chinese who would sooner or later all show up in Macau. And investors were shown fanciful charts and metrics to flesh out the eternally rosy scenario. Until the dream blew up.

More evidence is piling up that the Chinese economy isn’t just slowing down its growth. Read… China Entering Ugly Recession, Not Just a “Hard Landing?”

4 comments for “Macau’s Economy Blows Up”