The Province of Alberta, the epicenter of the Canadian oil bust, may be sliding into something much worse than a plain-vanilla recession. And it’s not exactly perking up the rest of Canada.

Layoffs are already cascading through the oil patch, as companies are retrenching and adjusting to the new reality. New vehicle sales are plummeting. And home sales are taking a broadside.

In August so far, total home sales in Calgary plunged 28% from a year ago, on flat prices. Condo sales collapsed 39%, with the median price down 8%, according to the Calgary Real Estate Board. Year-to-date, total home sales in Calgary are down 25%; condo sales 30%. And those condos that did sell spent 30% longer on the market than condos did a year ago, as sellers hang on by their fingernails to the illusion of wealth, and sales are stalling.

And the Business Barometer Index for all of Canada, which measures the optimism among small businesses, dropped again in August for the third month in a row. An index level between 65 and 70 indicates that the economy is growing at its potential. But now it hit 56.7, the lowest level since April 2009.

The Canadian Federation of Independent Business, which produces the index, blamed the commodity bust but added additional sectors, particularly those that are considered absolutely crucial for the hopefully coming economic recovery in the second half: construction, transportation, and retail.

The index dropped in 7 of 10 provinces, even in British Columbia, which was weighed down by “domestic conditions, coupled with weakening economic prospects in Asia.”

And that feverishly expected rebound of GDP in the second half from recessionary levels in the first half? Small business owners don’t see it. What they see is a continued downturn.

But it’s in Alberta where small business optimism has totally crashed. The Index dropped 3.5 points in August to 40.4, the worst level since March 2009, and just one such step above the historic low of 37, of February 2009, the very bottom of the Financial Crisis.

A bitter irony: for the years after the Financial Crisis, small businesses in Alberta were practically exuberant compared to those in the rest of Canada. But in November and December, their exuberance dissipated into the oil bust, and the index began plunging. In January, it fell below the national level for the first time since March 2010. And it has continued plunging. 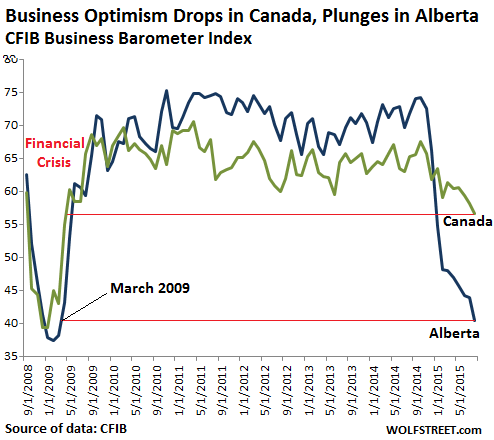 “As businesses are crunched, they’re examining all of their expenses more closely – their taxes, the regulatory costs, their wage costs – and if the government continues to add to the list of things, at some point they simply can’t handle all of those new costs,” CFIB Alberta director Amber Ruddy told the Calgary Herald, with an eye on the province’s new government that is musing about raising royalty rates on energy companies at the worst possible time.

And it’s not just businesses. It’s consumers too. Confidence of Canadian households regarding current economic conditions, according to the Conference Board of Canada, dropped to 91.9. Last year, the index was set at 100. But in the Prairie Provinces of Alberta, Saskatchewan, and Manitoba, consumer confidence plummeted to the lowest level since March 2009.

Sentiment dropped across all survey questions. The chart by the Alberta Real Estate Association (AREA), which is fretting about home sales, shows just how fast household confidence has fallen in the Prairie Provinces (black line, right scale). But the feeble hope is that it will not totally asphyxiate homes sales: the percentage of households thinking that now is a good time for a major purchase (blue bars, left scale) has fallen sharply – and is low (white horizontal line) – but has not yet totally crashed: 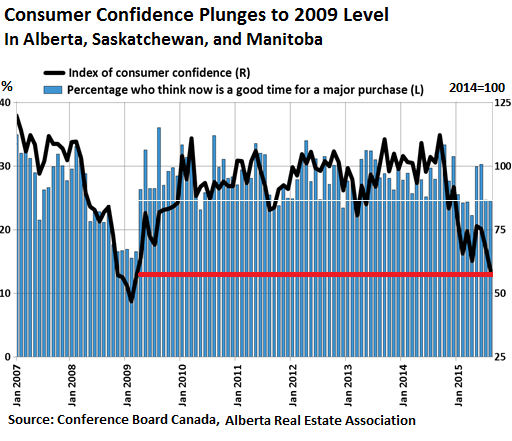 It looked dreary in the Prairie Provinces: Expectations for household budgets declined in August, and more households expected their budgets to decline further over the next six months. The outlook for jobs deteriorated, as layoffs of employees and reduced hours or no hours for contract workers – numerous in the oil business – are cascading through the local economy.

So it remains a mystery where exactly the power for that feverishly anticipated rebound in the second half is supposed to come from, unless a miracle happens to commodity prices. But miracles have become exceedingly rare these days.

The commodities rout is tearing into Canada’s broader economy, but this is even worse. Read… Canada “Getting Clocked” by Something Far Bigger than Oil

25 comments for “It Gets Even Uglier In Canada”