Oil spills into the broader economy.

Canada’s economy has split in two. The resource producing economy is deteriorating at a breath-taking pace, broadsided by collapsing commodity prices. For Canada, the most important commodity is crude oil.

West Texas Intermediate has plunged below $39 a barrel, not seen since the Financial Crisis, and Western Canadian Select to a catastrophic $25 (C$33.32) a barrel. Canadian tar-sands producers are particularly hard hit; they’re the globe’s high-cost producers. And the epicenter of this activity is the province of Alberta.

Then there’s the rest of the economy, which is trying not to wobble too visibly as its foundation is breaking up. It is very likely that Canada is in a “technical recession” – defined as two quarters of negative GDP growth. The first five months already outlined a shrinking economy, dragged down not only by the resource sector but also by other weak links [read… It Gets Ugly in Canada].

Now everyone is waiting for the June GDP numbers to be released. Canada is heading into a general election this fall, and the economy is front and center.

But new vehicles sales are still hanging in there. As in the US, the industry is powered by cheap and easy credit. It’s enabled by a frazzled Bank of Canada that keeps lowering the rates. Subprime customers are being aggressively courted by banks and alternative lenders that lust for the easy profits to be made on folks who think they don’t have a choice. And Wall Street makes a bundle repackaging these subprime auto loans into highly rated structured securities.

So new vehicles sales rose 0.4% in July from a strong July 2014, to 177,844 units, setting a new monthly record, for the seventh month in a row, according to the Canadian Auto Dealer. July sales were 14.8% above the past-five-year average. Year-to-date, sales rose by 2.4% over last year.

“In spite of the economic volatility both globally and here at home, Canadian auto sales continue to demonstrate resilience,” explained David Adams, president of the Global Automakers of Canada. “In the face of falling consumer confidence, Canadians still purchased vehicles in record numbers.”

There are a few cracks. The seasonally adjusted annualized sales rate (SAAR), an industry standard measure for auto sales in the US and Canada, had been declining in April, May, and June, and worrywarts were already counting their gray hairs. But then came July, with a SAAR of 1.98 million, which put auto sales back on track for a full-year record.

But in the oil patch, all heck has broken loose. Every economic index, from home sales in Calgary to business confidence, is heading south on a vertiginous slope. And consumers are getting the drift: this is going to get tough. And they slashed their new vehicle purchases.

Auto sales in Alberta muddled through during the first few months of the oil bust, when everyone still thought it was just a temporary blip. But real effects were seen in March, when new vehicles sales in Alberta fell -8.3% year-over-year, according to Statistics Canada; in April -8.2%; in May -13.7%. In June they plunged -17.6%, and in July -12.9%.

These are huge year-over-year declines.

Today, Stéfane Marion, Chief Economist & Strategist at NBF Economics and Strategy shed more light on this situation, with data just released by Desrosiers Automotive, juxtaposing new vehicle sales this year through July in the four largest provinces – British-Columbia, Quebec, Ontario, and Alberta. And this is what this oil-patch fiasco looks like: 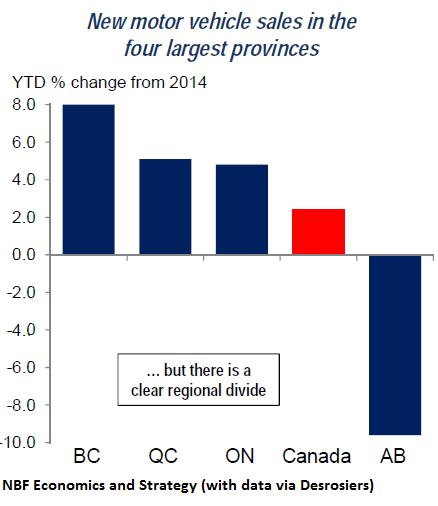 This is how the collapse in commodity prices, Canada’s most important export product by far, spirals into the broader economy, whose other main engine of growth, the housing bubble – one of the most magnificent the world has ever seen – is teetering precariously at its tippy top, waiting for that puff of air to come along.

So the oil price collapse is bad, but this is worse. Read… Canada “Getting Clocked” by Something Far Bigger than Oil