Chesapeake Energy, the second largest natural gas producer in the US, after Exxon, is the biggest exclamation mark in a special Fed-designed phenomenon: for years, QE-besotted, ZIRP-blinded, yield-hungry investors kept funding an industry that dished out nothing but hype, false hopes, and losses.

Two natural gas producers have already thrown in the towel: Quicksilver Resources filed for Chapter 11 bankruptcy in March, listing $1.21 billion in assets and $2.35 billion in debts. Much larger Samson Resources has scheduled its date with bankruptcy court for September 15.

In 2007, the hype around fracking for natural gas got started in earnest, and billions poured into the industry month after month. The price of natural gas soared, and by June 2008 exceeded $13 per million Btu at the Henry Hub. Then the price collapsed. But not the hype and false hopes. Investors still cling to them.

By September 2009, natural gas was below $3 per million Btu at the Henry Hub, and that’s where it is today ($2.67). No one can profitably frack for dry natural gas at these prices, regardless of what they claim.

The most productive US natural gas field, the miraculous Marcellus Shale, where Chesapeake is a big player… well, there are pipeline constraints and other issues, and the gas is traded at local hubs, not at the Henry Hub, and prices are even lower.

The Marcellus Shale is where money went to die the fastest.

Especially the “smart money” got fooled by the hype and false hopes of natural-gas fracking. Private equity firm KKR made two big bets on natural gas and lost $5 billion.

In 2007, KKR, TPG Capital, and Goldman Sachs masterminded the $48-billion leveraged buyout of TXU, the biggest electric utility in Texas. The “smart money” bet that TXU, which relied on coal-fired power generation, would gain a competitive advantage over the gas-fired power plants of its competitors as the price of natural gas would soar. In April 2014, the renamed Energy Future Holdings filed for bankruptcy.

In 2011, a KKR-led group of private equity firms pulled of the $7.2 billion LBO of Samson Resources. The “smart money” bet that the price of natural gas – at the time already below the cost of production – would soar [read… Big Natural Gas Driller Bites Dust, ‘Smart Money’ Gets Crushed].

So in terms of capital destruction, Chesapeake is in good company. Its annual free cash flow has been negative since 1994, even during good times, with only two tiny exceptions (Bloomberg chart). This business model left behind a mountain of suffocating debt. To hang on, Chesapeake has been selling assets for years.

As of June 30, it had $28.6 billion in assets, down by $13 billion from December 2012. But over the same period, its liabilities dropped by only $5.3 billion to $18.4 billion. Turns out, some of its assets were simply written off, not sold. Foggy numbers on the balance sheet that evaporated when they came in contact with sunlight.

To preserve $240 million a year in cash, Chesapeake announced on July 21 that it would eliminate its quarterly dividend. Its already beaten down shares plunged. Another great buying opportunity, folks said.

On August 5, Chesapeake reported quarterly earnings. Revenues fell 41% year-over-year to $3 billion, generating a net loss before income taxes of $5.6 billion. This included $5.1 billion in charges for “Impairment of oil and natural gas properties,” and “Impairments of fixed assets and other.”

That $5.1 billion had disappeared into the ether long ago. It just now became an accounting entry. These kinds of write-offs explain how assets plunged 2.5 times faster than liabilities since December 2012. It doesn’t take a genius to figure out where this is going.

When it announced those results, its shares plunged 10%.

And in the general mayhem on Friday, shares dropped nearly 4% to $6.87, the lowest since November 2002, down nearly 90% from their hype and false-hope peak in June 2008, when production soared and when the industry, infatuated with its own hype, explained to investors that the price of natural gas could only go through the roof. Shares are down 77% from June last year.

So in how much trouble is the company? Its bonds give an indication. When a company can no longer borrow under survivable terms, its lifeline gets cut off. And being permanently cash flow negative, it must raise new money to pay interest to existing bondholders. Once the new money dries up, the liquidity death spiral sets in, and eventually, creditors fight over the scraps.

In April last year, just before all heck broke loose in the oil markets, but years after the same heck had already broken loose in the natural gas market, Chesapeake issued $1.5 billion of junk-bonds due April 2022, with a ludicrously low coupon of 4.875%. By August last year, yield-desperate investors, blinded by the Fed’s shenanigans, bid them up to 105 cents on the dollar. 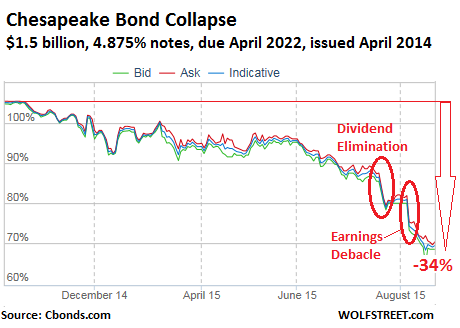 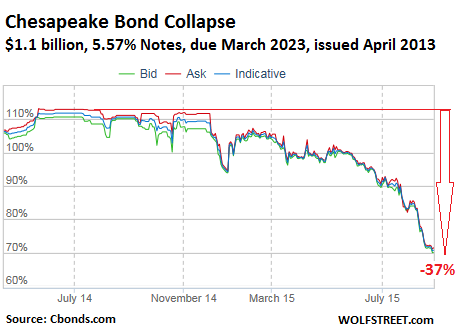 Chesapeake’s secured debt is faring much better. But holders of its unsecured debt are beginning to have serious doubts that the bonds will be redeemed. They’re calculating into the equation a significant probability that the company will have to restructure its debt, either in bankruptcy court, or outside, whereby shareholders would likely get wiped out, and unsecured creditors would be fighting over the scraps left over by secured creditors. This summer, expectations of that kind of wipeout have ballooned.

The easy money from the Fed was plowed into the production of natural gas until a glut and price collapse tore up the industry. Other commodities have crashed under the same principle, but natural gas was the first one out of the gate. Easy money and delusion kept the charade going for years. But now it appears to be coming to a head. And the full extent of capital destruction is gradually seeping to the surface.

9 comments for “Whose Capital Is Getting Destroyed in US Natural Gas?”