“Saturation” is the new Economic Reality. But this is Worse.

Smartphones conquered even impoverished consumers in desperately poor countries, giving them access to things they couldn’t even imagine a few years ago. The devices and the activities they spawned have been one of the world’s growth engines. China’s consumers adopted them at stunning rates. But even that growth engine is slowing down on a global basis. And in China, it just skidded backwards into the ditch.

Globally, smartphone sales in the second quarter rose 13.5% to 329.6 million units, the slowest year-over-year growth rate since 2013, Gartner reported today. What drove growth were cheaper 3G and 4G smartphones in emerging markets in Asia/Pacific – excluding China – Eastern Europe, the Middle East, and Africa. The winners in these markets were Chinese and local brands.

But in China – the world’s largest market for smartphones, accounting for 30% of global sales last quarter – unit sales fell 4%, the first decline ever.

Gartner’s explanation of the phenomenon, after years of mind-bending growth, featured the very unwelcome S-word:

China has reached saturation – its phone market is essentially driven by replacement, with fewer first-time buyers. Beyond the lower-end phone segment, the appeal of premium smartphones will be key for vendors to attract upgrades and to maintain or grow their market share in China.

It’s getting tough in China. “Saturation” inspires fear. It turns a market into a war zone of pricing and innovation, of margin pressures and profit declines. There will be shakeouts and losers. But in China, it’s worse: the market actually shrank.

Don’t blame Apple. Its large-screen iPhones have been kicking butt in China – and elsewhere. Globally, Apple’s market share rose by 2.4 percentage points to 14.6%. Unit sales rose 36% to 48.1 million. Apple saw strong iPhone replacements in all markets, but “particularly in China,” according to Gartner. In China, iPhone sales soared 68% to 11.9 million units.

The chart shows global smartphone sales. The declining sales of Lenovo include those by Lenovo and Motorola in both quarters. Note how super-hyped Chinese maker Xiaomi is falling further behind Huawei and Apple. 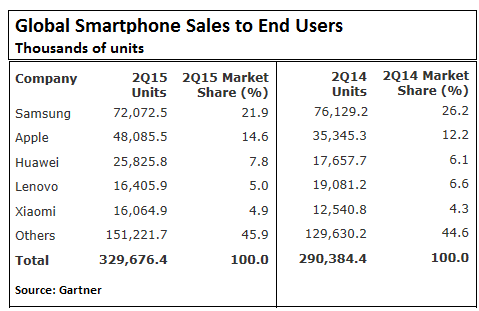 Apple’s double-digit growth in the high-end segment continued to negatively impact its rivals’ premium phone sales and profit margins. Many vendors had to realign their portfolios to remain competitive in the midrange and low-end smartphone segments. This realignment resulted in price wars and discounting to clear up inventory for new devices planned for the second half of 2015.

That debacle in China dragged down Android’s global growth to 11% year-over-year. Its global market share dropped 1.6 percentage points to a still phenomenally successful 82.2%.

And Microsoft’s operating system? Forget it. Gartner, gently: “In light of Microsoft’s recent cuts in its mobile hardware business, we’ll await signs of its long-term commitment in the smartphone market.” I wasn’t quite as gentle when I wrote a few weeks ago, Microsoft Tallies True Costs of M&A Boom: Layoffs, Write-Offs, Shut-Downs, and Economic Decline

The fact that smartphone sales in the world’s largest smartphone market declined in the second quarter, for the first time ever, is another warning that the official GDP growth figure of 7% is delusional.

“Saturation” is becoming a new economic reality in China. For years, global companies have been spoiled with hyper-growth. That era is over.

But actually shrinking sales are worse than what could be expected in a merely “saturated” market, which would imply flat or slowly growing sales. It’s hard to blame “saturation” for shrinking sales. Something more complex is going on, something that the official figures refuse to acknowledge.

Smartphones are not the only consumer item facing this debacle of shrinking sales in China after years of breath-taking growth. Numerous other products are now wading through the same mire. For example, passenger vehicles sales in China, the largest auto market in the world both in terms of manufacturing and sales, declined in June and July from a year ago. But incredulous manufacturers are still building plants and adding capacity.

And GM has already figured out how it will deal with its overcapacity in China. Read… LEAKED: GM Sees Overcapacity Fiasco in China, Hopes Americans Will Buy Lots of Chinese-Made Buicks