Consumers Finally “Getting on with Their Lives” as Credit-Card Debt Slaves: Equifax

Equifax, which profits from the process when more people apply for credit and load up on debt, sees the miracles of the current economy this way: “American consumers continue to show signs they are recovering from the Great Recession by steadily increasing their credit card debt….”

In its report on credit card debt, Equifax raved about these newly empowered American consumers that are once again buying things they can’t afford and charging these purchases to their credit cards because they didn’t have enough money to pay for them otherwise, given their stagnating salaries. It shows up in the numbers:

Total credit card debt rose to $634 billion at the end of the second quarter, a 5% jump compared to $604 billion a year ago.

That’s nationwide. And 5% is a big gain, given that there was supposedly zero inflation over these 12 months, and that the economy over the last four quarters has grown at the blinding speed, based on the newly re-rejiggered methods of figuring GDP, by a whopping 1.8%.

But in a number of cities, credit card debt soared far beyond the national average. And in a few, the rate of growth is not only accelerating, it’s going through the roof. Equifax was practically giddy:

The rate of growth in credit card debt more than doubled year over year in many of the metro areas hit hardest by the housing market crash, and more than tripled in other cities less affected by the crash.

Even the credit-card-debt laggards among the metro areas are finally getting into the mood: in Detroit, the rate of growth of credit card debt – not total credit card debt – soared by 222% from a year ago, in Phoenix by 308%, and in St. Louis by 317%. These folks are really making an effort.

This is what we’ve all be waiting for, finally, the true recovery of the American economy when people once again borrow to the hilt to buy imported gadgets or clothes, when they charge even food to their credit cards, and rent payments, and certainly healthcare expenses, and when they charge down payments on their cars to their credit cards… in short, when they try to make up with debt what their stagnating salaries cannot deliver.

It’s once again the era when American consumers live beyond their means, slither ever deeper into the glorious condition of debt slaves, all in order to crank up the economy and make it grow at, well, that measly 1.8%.

At any rate, the credit-card debt binge is picking up speed:

“Every major market has seen increases in credit card debt, even those cities where the housing market issues are not completely resolved,” the report said, given that Housing Bubble 2 is now even more magnificent on a national basis than the prior one that turned into such splendid debt-fueled fireworks, though there’s a bitterly ironic twist this time [read… What’s Left of the American Dream Withers at Record Pace].

The importance to the economy of this consumer binge on expensive credit card debt cannot be underestimated. Equifax:

This shows that American consumers are more confident about their financial futures, and that means the U.S. economy has entered an expansion mode.

Consumers are doing the greatest job in Miami, where total credit-card debt soared 9.5% from a year ago, in Las Vegas (9.4%), in Orlando (9.3%), in Houston (9.1%). These are the cities where consumers have been most actively engaged in cranking up the economy by buying things they can’t afford. Here is the growth of total credit card debt in the largest 25 metro areas: 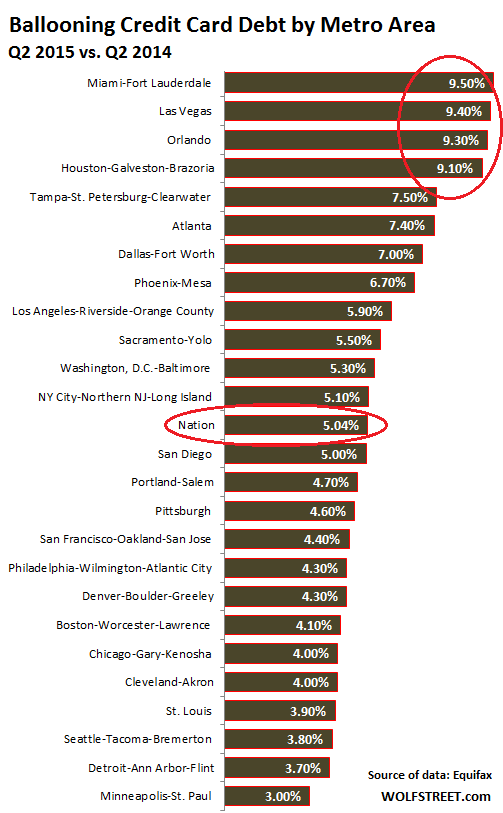 This is the final effort in the debt-fueled “recovery” of the US economy. Companies have gorged on debt. The federal government has piled on the most debt at the fastest rate ever. State and local governments, despite any balanced budget requirements, and even public pension funds have loaded up on debt. And consumers have been binging on debt to buy cars and get an education and buy homes at a feverish pace. Outstanding auto loans now amount to over $1 trillion. Payments are routinely extended over 72 months. Loan-to-value ratios have jumped. And automakers have become outright ecstatic.

What had been missing? Consumers charging up their credit cards. Now finally, the US economy has jumped over that hurdle too. Equifax explained in its eloquent manner, “These trends suggest that American consumers are getting on with their lives.”

The lives as debt slaves. Because they can’t maintain their standards of living with their stagnating household incomes. This too was part of the movie we’ve seen before.

But not everything may be this rosy. At first, it’s a sampling error, a statistical fluke, or the weather, but suddenly it’s serious. Read… Americans’ Economic Confidence Gets Mauled

42 comments for “This is What We’ve Been Waiting for, the True Recovery of the American Economy”