At first, we thought it might have been a blip, a short-term thing, something to do with the winter weather which was gorgeous in California, though some folks in the East were getting lots of exercise shoveling what seemed like endlessly renewable snow. And we might have blamed it on the margin of sampling error.

In early January, the economic confidence of Americans had reached the highest level since before the Financial Crisis, according to Gallup’s Economic Confidence Index. But then it began to drop. At the time, the weather was blamed for everything. But spring should have turned it around. Only it didn’t.

During the Financial Crisis, the bottom fell out of the index until it hit an all-time low of -65. Then “green shoots” started sprouting in the minds of more and more Americans, and by early 2011, the index reached -18 before re-plunging to -54 in the fall as a result of the debt-ceiling fight and talk of default. After the Congressional charade was over, economic confidence reemerged from purgatory.

And that was it. The weather or something was starting to get Americans down, and it wasn’t just for a week or two or a month a two, and it wasn’t within the margin of error, but it has lasted the entire year so far. The index has now dropped to -12, the lowest since October last year.

“This was the result of 25% of Americans saying the economy is “excellent” or “good” and 30% saying it is “poor,” Gallup explained. The three-day rolling average hit a low point of -17 during the July 12-14 period, the worst level since September.

This is the dismal trend so far this year of the Economic Confidence Index: 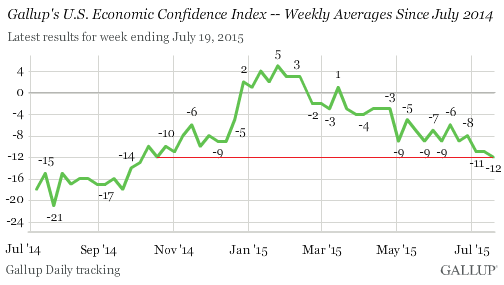 Gallup blamed Greece. The extortion racket over Greece was carried out in the media, with talking heads from one or the other side proclaiming on a daily basis the end of the world or of whatever, if they didn’t get their way. And this got Americans to think dreary thoughts about the US economy, apparently. But once the crisis was “resolved” with a deal that is totally unsustainable and makes no sense to anyone, and once the end of the world had been averted by Greece staying in the Eurozone for now, the three-day rolling average index ticked up a smidgen.

But the index is a composite of current conditions and future conditions. And the devil is in the details.

Turns out, the index measuring current conditions so far this year has dropped, but only a little, from +3 in early January peak to -5 now, and it actually ticked up this week. But the economic outlook index has swooned from its high in February of +7 to -18 now! That’s a 25 point plunge. 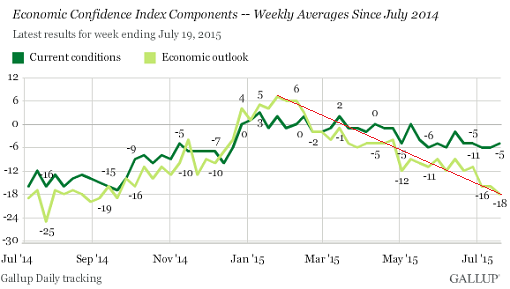 The current score of -18 is based on 39% of Americans saying the economy is “getting better,” and 57% saying it’s “getting worse.” A solid majority of Americans have once again turned bearish on the future of the economy, after all the hype and hoopla in December and early January.

So what painful things are these people seeing down the line? Higher interest rates, as 30-year mortgage rates have jumped well above 4% even before the Fed has begun raising rates? Tightening hiring conditions as companies come to grips with stagnant or declining sales and earnings? Whatever it is that causes Americans to turns bearish on the future of the economy, it has nothing to do with the weather or Greece.

These people are focused on the reality on the ground, and what that reality might look like for them in the future. They’re figuring out that, despite all the hype and proclamations and the record stock markets and booming housing market, reality for them personally simply doesn’t look all that enticing.

It takes a lot of market enthusiasm to just totally give up on the idea of net profits and focus instead on the hope that management comes up with some new and more palatable metrics. But that’s what’s happening. Read… No Growth, No profit, No problem