It was a historic day. Google’s market capitalization jumped by over $60 billion, enough to bail out Greece for a couple of years, and handily beating the prior single-day record of $46 billion held by Apple.

The thrilling event occurred on the news that Google’s second-quarter revenues rose 11% year-over-year – which seems like a lot in a quarter when S&P 500 revenues are expected to shrink – and “net profit” rose 17%, while net earnings per share of its class A common stock inched up a measly 1%, which sent these shares up 16%.

Or maybe it was on the news that Google finally hadn’t disappointed analysts’ expectations. Or rather, that they’d finally lowered their expectations enough to where Google could exceed them.

The action gave the NASDAQ a big push to rise almost 1% to another all-time record. It’s now 4% above the prior crazy record of March 2000. And this time, everyone agrees, it’s different.

But at least, Google had a profit. A big one, $3.9 billion, so “earnings” with a plus-sign in front of it, rather than a minus-sign. A feat that seems impossible to reach for a number of other companies in the tech space where profits are optional. Or perhaps even a handicap.

Morgan Stanley’s “New Tech” index is trading at 149.5 times forward earnings, Barbara Kollmeyer at MarketWatch pointed out. And that’s high. But it’s based on pro-forma, ex-bad items estimates of what earnings might possibly look like in the next twelve months under the most optimistic or simply fabricated circumstances. So rose-colored fiction.

As those quarters get closer, analysts whittle their earnings estimates down. By the beginning of the reporting period, they’re then close to something that these companies can actually beat. Even better, those “earnings” to beat might actually be with a minus-sign in front. Just lose less money than expected. That formula works all the time.

So “New Tech” is very expensive. And compared to the peak of the last tech bubble which blew up in March 2000?

“This is probably bubblier than it was then given the lack of market memory,” Keith McCullough, CEO of Hedgeye Risk Management, told Kollmeyer.

Looking at past performance, the “New Tech” index sports an average trailing twelve-month P/E ratio of 69. And it’s high. But it obscures reality.

The P/E ratio of a company that has a loss is undefined. It’s usually expressed as “N/A” or just a dash. It’s thus excluded from the average P/E ratio of the index (table). Hence, only profitable companies are included in the calculation of the P/E multiples of the overall index. Which gives the “earnings” part of the P/E ratio a strong upward bias. 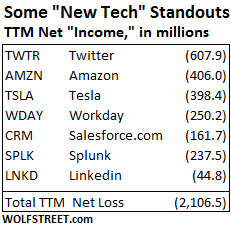 Yet, there are some big losers in the “New Tech” index, including the well-known sinners in the table to the left. These seven companies combined had a total of $2.2 billion in net losses over the past four quarters. Note the three worst offenders – Twitter, Amazon, and Tesla.

Splunk, which had $125.7 million in revenues last quarter, down sharply from the prior quarter, lost $71.2 million in the quarter and $237 million for the year. Yet the company has a market capitalization of over $9 billion. No growth, no profit, no problem. Go figure.

Not to speak of the valuations of Tesla, Amazon, and Twitter. That takes a lot of market enthusiasm to just totally give up on the idea of net profits and focus on the hope that management comes up with some new and more palatable metrics.

Mark Hulbert, who keeps his fingers on the pulse of contrarian indicators, put this sort of enthusiastic disregard of reality into a harsh light:

I draw this worrisome conclusion from this week’s San Francisco Money Show, where hundreds of investment gurus are giving workshops and seminars to thousands of investors. I count on the fingers of one hand the presentations dedicated to managing risk and how to avoid losses.

In contrast, there were numerous workshops catering to greed, with advisers enticing investors with the prospect of triple- and even quadruple-digit returns.

This is a worrisome situation, according to contrarians because at market tops, greed completely replaces fear as investors’ primary concern.

At market bottoms, by the way, fear dominates greed – just the opposite of what prevails today. Consider the Money Show held in May 2009, in the wake of the 2007-2009 bear market: As I wrote at the time, its workshop titles were dominated by the themes of “safety,” “managing risk,” and “survival during market crashes.”

In true contrarian fashion, that came just as the great bull market was taking off.

But, as contrarians constantly remind us, it pays to focus on risk when everyone else is overcome with greed.

Chilling words in this steamy market.

So this time,the asset bubbles are far broader than they used to be, after years of central-bank money-printing and zero-interest-rate policy in major economies around the world, whose sole purpose it was to inflate asset prices. This was supposed to create a “wealth effect,” which was supposed to stimulate the economy. It certainly worked in inflating asset prices.

Now nearly all assets are overpriced. And enthusiasm for even more asset-price inflation is palpable. The insane asset-price stimulus is still rampant, though the Fed has terminated its money-printing binge and is contemplating the idea of raising interest rates from zero to nearly zero. We’ve never had this sort of global environment. Not in 2000, not in 2007. So yes, this time it’s different. But in the wrong direction.

It all boils down to finding the perfect wealth transfer method. JP Morgan did. Read… “Leveraged Loan” Time Bomb Goes Off

20 comments for “No Growth, No profit, No problem”