“I don’t rule out any of the meetings from here on out,” Boston Fed President Eric Rosengren said about the propitious moment when the Fed would raise interest rates. He is one of the three ultra-doves on the Federal Open Markets Committee that sets the rate policy. It’s the doves that matter. And another one just caved.

“Any” of the meetings? The next meetings are on July 28-29 and on September 16-17. So this could be pretty soon. It would be the Fed’s first rate hike since June 2006, and for many souls on Wall Street, the first rate hike in their careers: 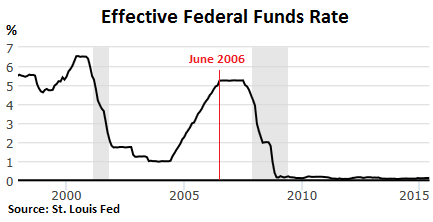 “If we do continue to get improvement in labor markets, if we do become reasonably confident that we’re moving back to 2-percent inflation, it may be appropriate as early as September,” he told Reuters in an interview. As always, there is a backdoor: “I don’t think we have seen that evidence yet, but we still have a couple months of data to see whether it’s more strongly confirmed.”

To open that backdoor, however, would require some real deterioration in the US economy. Reuters:

Only if labor markets unexpectedly weaken, if core inflation starts to drop off, or if the wage gains dissipated, “those would be the things that would make me want to pause and wait and see whether there is further evidence,” he said.

With the unemployment rate now at 5.2%, he expected economic growth to hit 2.75% in the second half and predicted core personal consumption expenditure (PCE) inflation, the Fed’s preferred scale, to inch up to 1.3% by year end and to 1.6% by the end of 2016. This aren’t exactly hot numbers. Add some tightening in labor markets, and that “might make me start tightening….”

If “international shocks turn out not to be negative at all that would be very good news,” he said. Which has been the case so far: the chaos over Greece, the stock market crash in China, the government’s panicky efforts to reverse it…. nothing so far has seriously rattled the stock market in the US, and that’s what everyone at the Fed keeps their eyes on.

OK, Rosengren doesn’t get to vote on policy this year, but the fact that he, one of the three most dovish members, just caved shows where the Fed is headed.

Another ultra-dove, New York Fed President William Dudley, considered a close ally of Fed Chair Janet Yellen, already caved on June 29, when he said that lift off in September was “very much in play.”

Greece was a “huge wild card,” he said. At the time, Greece was threatening to blow up what little remained of its banks and its economy if it didn’t get everything it wanted. But that standoff has been resolved. It did blow up what remained of its banks and its economy. And early today, the Troika agreed in principle to lend it even more money under even stricter conditions. Nothing is finalized. Everything has to be approved by parliaments. And Greece has to implement a number of deeply hated and long delayed measures within days…. But stocks are soaring, and that’s all that matters.

So Dudley’s fear about that “huge wild card” has been mollified.

“If we hit 2.5% growth in the second quarter and it looks like the third quarter is shaping up for something similar, then I think you are on a firm enough track that you would imagine you would have made sufficient progress,” Dudley said. And the Fed could raise rates “certainly by the end of the year.”

Dudley’s figure of 2.5% GDP growth in the second quarter seems to be in the ballpark. The Atlanta Fed’s GDPNow model, which attempts to predict the first estimate of GDP and gets increasingly accurate as the release date approaches, totally nailed it for the first quarter a month ahead of the release date. For second quarter GDP, to be released on July 30, the GDPNow model predicts 2.3% growth (as of its last update on July 7): 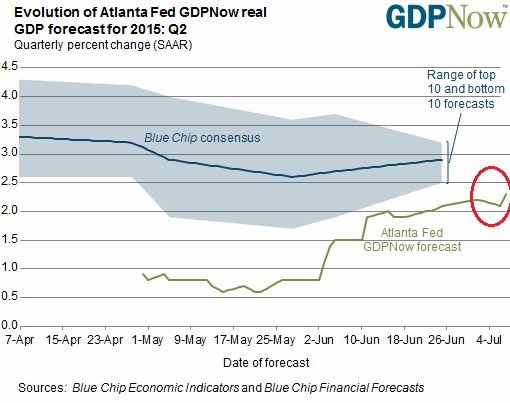 This is the new normal for the no-escape velocity of the US economy. It’s within the range that dove Dudley is willing to accept. It’s been that way for years, despite the Fed’s waves of QE and its zero interest rate policy. But now it’s good enough.

Despite clamoring on Wall Street that the Fed would never stop QE, the Fed tapered QE out of existence last year. Now they claim that the Fed can never raise rates, given the lethargic economy and the mountain of new debt that the low-interest-rate environment has produced. These are efforts to prevent the Fed, which has been enslaved to Wall Street, from raising rates.

But these efforts seem to be failing, just as they failed with QE. Interest rate hikes are coming, and at least one of them this year. Yellen is getting more and more of her ducks lined up in a row. One of the real reasons for pushing rates higher is the dread that the next recession might hit while interest rates are at zero. That would be too embarrassing. And a nightmare from a monetary point of view.

The Fed isn’t the only central bank that has moved aggressively to inflate asset prices, particularly stocks and bonds. In recent years, it has become a pandemic, leaving investors in a peculiar situation. Read….  Why I Don’t Short Stocks or Bonds in this Crazy Environment Where Nearly All Assets Are Overpriced

9 comments for “Despite Wall Street Conniptions, Another Fed Dove Caves”