Our corporate heroes hit a snag.

We have long grinned painfully at the ways in which Corporate America and analysts collude to present the quarterly earnings charade in the rosiest light possible. But now, it seems they have reached the end of their magic tricks, and reality is showing through in an increasingly terrible trend.

As the actual quarter draws nearer, these earnings expectations get whittled down to where very little earnings growth is left, if any. This way, corporations have a good chance of beating them, and thus propping up their stocks via an “upside earnings surprise.” If they get it right, it works like a charm.

Over the past four years, 72% of the S&P 500 companies have managed to report higher earnings per share than the analysts’ mean estimates at the time, according to FactSet. And so earnings growth has been on average 2.9 percentage points higher than the mean estimate at the beginning of the quarter, “due to the large number of upside earnings surprises,” as FactSet puts it.

Now the bad news. Currently the S&P 500 companies are projected to report a year-over-year decline in earnings of 4.4% for the second quarter, on a revenue decline of 4.2%. Of the companies in the index, 24 have already reported, which nudged up the estimates at the beginning of Q2, when the earnings decline was pegged at 4.5%.

So everything is estimated to head south. Companies are blaming the dollar, in addition to the weather and a slew of other things. Instead of losing value as it had been for years, the dollar has regained some inconvenient oomph. And inflation has been too low for our corporate heroes. A declining dollar and more inflation would have masked the earnings and revenue debacle. Not this time. But consumers, for once, are spared the pain of experiencing how their stagnant earnings lose value every time they shop.

Biggest culprits in the earnings and revenue debacle are the energy sector, industrials, and consumer staples, with Tech essentially flat. Despite the hype, Big Tech (that’s what is in the S&P 500) has stopped being a growth industry long ago. But healthcare is, as always, relentlessly booming and eating up an ever larger share of GDP.

These are not exactly hot numbers.

Don’t despair. Companies will beat these numbers with plenty of positive “earnings surprises” in the weeks to come, given all the expert financial engineering that goes into these numbers.

But they might not be able to beat them by enough to get them into the green. Over the last four years, actual earnings were on average 2.9 percentage points higher than estimates at the beginning of the quarter. If it works out this way for Q2, earnings would still decline by 1.6%, which would still be the worst earnings debacle since the Financial Crisis.

However the final outcome, what’s striking are the trends of earnings estimates at the end of the quarter and of actual earnings “growth” – both of which have been heading south for over a year and are now, despite all expert financial engineering, turning negative: 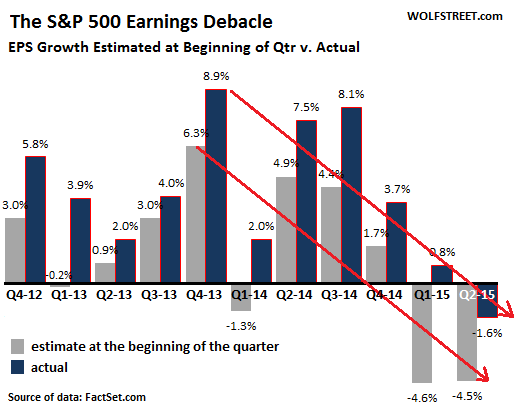 Peak growth in year-over-year earnings recently was in Q4 2013 at 8.9%. In the quarters since then, earnings growth has been bumpy, and since Q3 2014, earnings growth has plunged. In Q1 this year, it was down to a barely visible 0.8%. For Q2, it looks worse. These trends speak volumes not only about the global economy but also about how financial engineering has been maxed out, how its effectiveness in goosing numbers has peaked, and how it can no longer create the appearance of “growth.”

Don’t tell the S&P 500. The index is still hovering near its all-time high. It might get nervous on its lofty perch. But the bond market is already feeling the malaise, as financial contagion spreads to the US. Read….  U.S. Primary Bond Market Seized Up, Junk Bond Issuance Frozen, Chaos in China, Greece, Puerto Rico, Commodities Cited