Another miracle happened in San Francisco. In May, the median sale price of all types of homes, after having already spiked in the prior months, jumped another 4%, to a vertigo-inducing $1,275,000.

That’s not a palace, but more likely a no-view two-bedroom apartment in a decent area, and if you’re lucky, with a shared garage and “tandem parking,” where you have to move several cars to pull out yours in the back.

During the prior housing bubble, the one that helped trip up the global financial system when it imploded, home prices in San Francisco peaked in November 2007 at a then mind-boggling $895,000. Valuations that afterward were called “crazy.” By January 2012, the median home price had plunged 31% to $615,000. But it was still a lot of money for that kind of home.

By then the tsunami of money that the Fed and other central banks had unleashed was already washing over San Francisco. The stock-market boom has powered a startup boom that the city is so dependent on. An office and condo construction boom took off. And ultra-low interest rates provided the propellants to make it fly. Everything came together.

Since January 2012, the median home price has skyrocketed 107%, according to Paragon Real Estate Group’s June 2015 report. It’s now 42% higher than it was during the peak of the prior all-time crazy bubble.

January is usually the low point in the seasonal fluctuations, followed by the white-hot spring selling season. With sales prices reflecting deals negotiated in the prior month or two, there is a lag. So from January to May 2014, home prices rose 9%. Over the same period in 2013, they surged 20%. But look at that gorgeous 38% spike year-to-date: 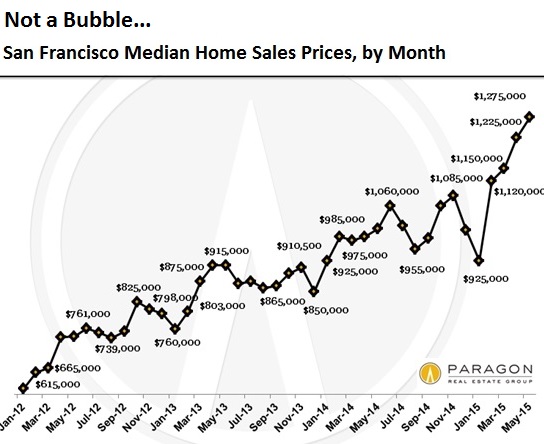 Paragon’s Chief Market Analyst, Patrick Carlisle, pointed at where the action has been – at the high end:

High-end home sales and prices in the city have been increasing rapidly, with interesting shifts occurring between older high-prestige neighborhoods like Pacific Heights and Russian Hill, and areas such as Noe Valley and South Beach, where surging sales of very expensive homes are a more recent phenomenon. Part of this shift is being fueled by the explosion of younger, high-tech wealth; another part is the recent construction boom of high-rise, ultra-luxury condo buildings south of Market Street.

There’s an “enormous variety in high-end real estate in San Francisco, from mansions to penthouses, Victorians to new, ultra-high-tech construction,” with one of the more common amenities being “spectacular views.” Pano views might include the Bay, the Peninsula, the Pacific, the Golden Gate Bridge, or the Bay Bridge, and if you’re very lucky, a different view from each side of the home.

Renting is a cheaper option, but it’s still dreadfully expensive. The median rent, according to Zillow, is $3,162 per month, the second highest in the nation, a smidgen behind another Bay Area miracle, San Jose.

In San Francisco, you’d need $126,500 in annual household income to be able to afford the median apartment without exceeding the recommended 30% rent-to-income threshold. At a wage of $15 per hour (the minimum wage effective July 2018), it would take four earners in one “household” to make this work. So mostly, forget it. These folks are priced out of the city, even if they were born here.

As impossible as it may seem, that’s still a heck of a lot cheaper than buying a similar unit and paying the mortgage, association fees, maintenance, water, garbage, and taxes.

But buyers are exuberant, certain that this is going to work out for them. In May, the average home sale was 10% above the original asking price, the highest rate since the prior housing bubble. “Fiercely competitive buyer bidding wars,” is how Patrick Carlisle described it. And nearly 93% of homes sold “without going through any price reductions, an astonishingly high percentage.”

Two of the biggest factors affecting the San Francisco real estate market are extremely low interest rates, which have a large impact on the ongoing cost of homeownership, and surging well-paid employment. According to Ted Egan, San Francisco’s Chief Economist, high-tech jobs alone jumped by 18% in the 12 months through March 2015, and as of April, the city’s unemployment rate, at 3.4%, was the lowest since the height of the dotcom boom.

In April, the city counted 524,100 employed residents, up 22% from the peak of the prior bubble in 2008. The employment boom is based on the tech boom where startups and corporate giants alike are hiring like maniacs because money is no objective. The booming stock market, corporations on an acquisition binge, yield-starved investors around the world, and near-global interest rate repression are making it all possible. But when it ends, as it always does, it ends swiftly.

Tech booms turn invariably into busts. It would happen at the same time when the global tsunami of money is suddenly receding and when stocks are heading south. Interest rates are scheduled to head higher. Mortgage rates are already on the way, with 30-year rates above 4% for the first time this year. When mortgage rates reach 6%, which would still be low by historical standards…. We don’t even want to contemplate the sort of mess this confluence of factors would cause.

But we know how to deal with this. We’ve been through this before….

“Let’s ride this wave while we can, as far as we can, for as long as we can,” the speaker on our Public Radio station, KQED, said this morning, referring to the recent warnings by Gov. Jerry Brown that the next “crash” and “recession” were just “around the corner.” Read…  What Does California Gov. Jerry Brown Know about the Next Crash and Recession that We Don’t?