The good news – if you can call it that: US containerized ocean export activity in April inched up 2.8% from March. It was the first uptick all year, according to the Cass/INTTRA Ocean Freight Index. But in the prior months, the index had plunged to its worst level in the data series going back to the end of the Financial Crisis.

The index doesn’t include commodities such as petroleum products or wheat that are shipped by specialized carriers. It doesn’t include goods or commodities shipped by rail, truck, or pipeline to Mexico and Canada. And it doesn’t include air freight, which is only a tiny percentage of total freight tonnage. The index is a measure of export activity of manufactured products sent by containership. But in the overall US trade statistics, the rise of commodity exports papers over the collapse in exports of manufactured goods. 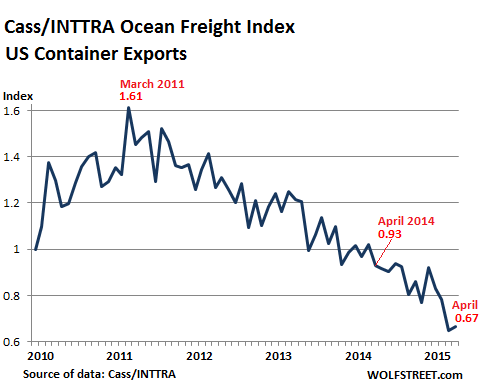 Export activity just about plunged off the chart during Q1. Note how sharp the movement was compared to the relatively slight up-and-down during Q1 last year. The minuscule uptick in April is barely visible at the tail end of the chart. Yet it’s all we have as a first feeble sign of export growth this year, from abysmally low levels. And even that may turn out to be an illusion, given the long-term trend.

The strong upturn in export activity in the period immediately following the Financial Crisis, part of the V-shaped “recovery,” peaked in March 2011 of 1.61. Then in 2012, what looked at first like a return to the mean was actually a sign that container export activity was coming unglued. And the current global downturn aggravated the situation.

Exports are vital to every economy. Currency wars are fought to increase exports. Trade wars are fought over it. Every country wants to export more and import less. Exports add to GDP, imports subtract from it.

Yet, even as the Fed’s QE caused the dollar to swoon against most major currencies after the Financial Crisis, US exports of manufactured goods, which should have gotten more competitive in the international markets, didn’t rise past the initial dead-cat bounce. They crashed instead.

The dollar’s sharp rise since the second half last year had a barely visible impact: exports of manufactured goods simply continued to crash along the same trend line as before.

This is in part the result of a corporate strategy that has been pushed to new heights in the US since the onset of QE and interest rate repression. Corporations borrow money cheaply to buy back their own shares and to acquire each other – the twin booms of share-buybacks and M&A – instead of investing this money in productive activities in the US. They offshore production to locations where labor is cheaper and child labor possible, where they can pollute the environment without limits, where building codes are not enforced, where wages might be a few of bucks a day. Even China is getting borderline expensive.

Import activity is a different story! A more glorious one. American companies know how to import. Economists publicly drool over rising imports as a sign of an improving economy. But they too are running into trouble.

In April, container import activity rose 6.5%, after having surged 17.3% in March, bringing the index to 1.308. But that’s is still down 5% year-over-year, thanks to the ugly first quarter and the lousy beginning of the second quarter in consumer and business demand in the US. Year-to-date, the index is still down 15.1% from the same period last year. Yet with all its sharp ups and downs, import activity continues to stay within the range of 2013 and 2014 and is robustly higher than in prior years. 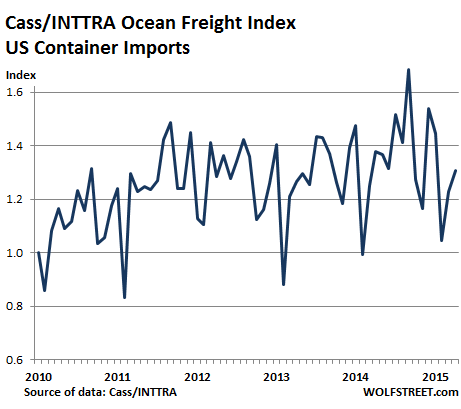 Concerning imports, Cass added this comment in its report:

April’s increase is due almost entirely to imports from China. In fact, without China the number of container imports would actually have declined. Shipments from almost half of the 25 countries included this index declined in April…. Imports from Pakistan, Taiwan, and Bangladesh fell substantially in April.

As long as corporations shift manufacturing to locations in other countries, the US will import more but has fewer manufactured goods to export. And that fabled “manufacturing renaissance” in the US? We love the few anecdotes here and there, but on a national basis, it’s not in the cards, given the current monetary policies that reward corporate executive for only one thing: financial engineering.

But it’s not just in the US. Something is happening on a global basis that isn’t supposed to happen. Read…  Global Trade Dives Most since the Financial Crisis

25 comments for “US Containerized Exports Plunge Off the Chart”