Inflation has not been a problem recently, according to the Consumer Price Index. Energy prices have plunged, which helped, and the rising costs of housing, which account for over one-third of the index, are purposefully mitigated via some elegant statistical twists, and that helped a lot.

Everyone has been lulled to sleep by the sheer absence of consumer price inflation. And the Fed has used this low inflation as pretext to keep its foot all the way on the accelerator of total interest-rate repression, though it isn’t accelerating much of anything other than asset price inflation.

But that was then, and this is now.

The headline CPI still looks benign, inching up 0.1% in April on a seasonally adjusted basis, the Bureau of Labor Statistics reported today. Over the last 12 months, the all-items index declined 0.2% before seasonal adjustment, thanks to the energy index, which plunged 19.4%.

But the core CPI (less food and energy) rose 0.3% in April, its largest increase since January 2013. Some of the standouts:

Heat is building up beneath the overall index.

To shed more light on this phenomenon, the Atlanta Fed releases a “sticky-price consumer price index,” the “Sticky CPI,” which consists of a weighted basket of items that change price relatively slowly. And in April, annualized, it soared 3.50%, the sharpest increase since July 2008! “Core Sticky CPI ex-shelter” soared 3.83%, the highest since August 2008.

This puts the Sticky CPI at 2.1% above where it was a year ago, even though the overall headline CPI, thanks to the plunge in energy, actually declined over the same period. The Sticky CPI is not supposed to jump like this; it consists of items that change price “relatively slowly,” as the Atlanta Fed describes it. Now they’re in lift-off mode.

This chart, going back to January 2009 shows the sudden spike of inflation, as expressed by the Sticky CPI: 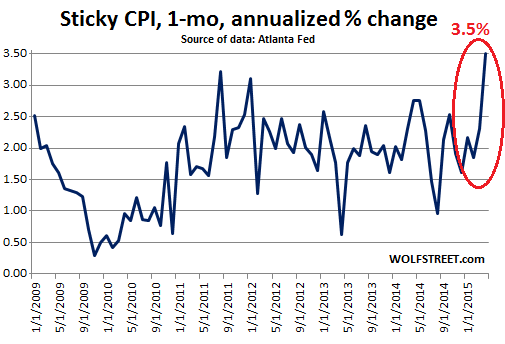 Fed Chair Janet Yellen said today that “it will be appropriate at some point this year to take the initial step to raise the federal funds rate target and begin the process of normalizing monetary policy.” To support this sort of revolutionary activity, she would have to be “reasonably confident that inflation” – for her, that’s the PCE index – “will move back to 2% over the medium term.”

Energy is not going to decline much further from where it was in April. Other prices are rising and some are soaring. What gives?

This puts the Fed way behind the curve – as many experts have long predicted. So here is former Fed Governor Lawrence Lindsey, who was right before in a big way and got fired for it. He said that the Fed has “almost no credibility” with his clients about “staying on top of ticking monetary bomb.” Read… Former Fed Governor Predicts “Wrenching” Market Adjustment

9 comments for “Atlanta Fed: Inflation Heating Up Beneath Surface”