On Tuesday, I posted, This Is How Insane San Francisco’s Housing Bubble Really Is. A number of commenters shared their experiences in the Bay Area, confirming just how crazy the situation has gotten beyond San Francisco itself. In other cities in the country, home prices have shot up too.

Housing bubbles have also matured into magnificent bloom in Canada, particularly in Toronto and Vancouver, in Australia, New Zealand, the UK, particularly in London, a number of cities in Germany, and in other countries. Money printing and interest-rate repression by central banks perform true magic on inflating asset prices – including home prices.

While the jury is still arguing over which city has the craziest housing bubble: San Francisco, New York City, Vancouver, Toronto, Melbourne, etc., David in Texas sent me an email to paint a similarly crazed scenario, albeit with smaller numbers, for an unexpected bubble candidate, Dallas.

The national indices don’t always reflect what is happening on the ground. It helps to get some granular details. So here is one of them for Dallas, where the oil bust has had no impact on the blooming housing bubble. Not yet, at least, as far as we can tell.

By David in Texas:

I realize you have a different level of insanity in the Bay Area, but here’s an anecdote from Dallas that shows the madness has accelerated here, despite the oil price declines.

This is the Zillow chart for a friend’s house just west of the Park Cities (the old money part of Dallas). It is a gentrifying neighborhood where the old cottages are being torn down and McMansions built at a furious pace. 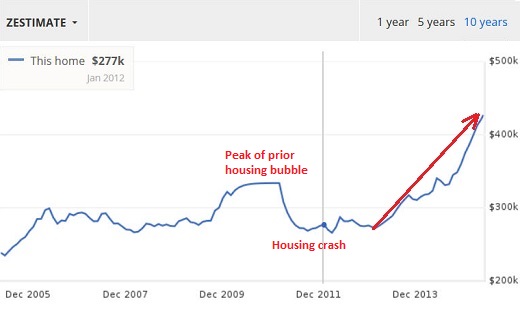 I’m not sure how accurate Zillow is overall, but this trend reflects what I’m seeing in that neighborhood.

Buy, buy, buy before the opportunity is gone, is the thinking – among a lot of people and not just pushy real estate brokers.  A few less desirable neighborhoods nearby (or formerly less desirable) are becoming flip-central. Party like it’s 2006! By David in Texas.

Inflating home prices, as the Fed has purposefully strained to do for years, has a different impact than inflating stocks and bonds. When stocks and bonds soar into absurdity, people don’t have to live in them…. So in this environment, how many years does it take to save up for a down payment in San Francisco and other US cities if you earn the local median income? Are you sitting down? Read…  How Soaring Housing Costs Impoverish a Whole Generation and Maul the Real Economy

5 comments for “The Sudden Housing Bubble in Dallas: Personal Perspective”